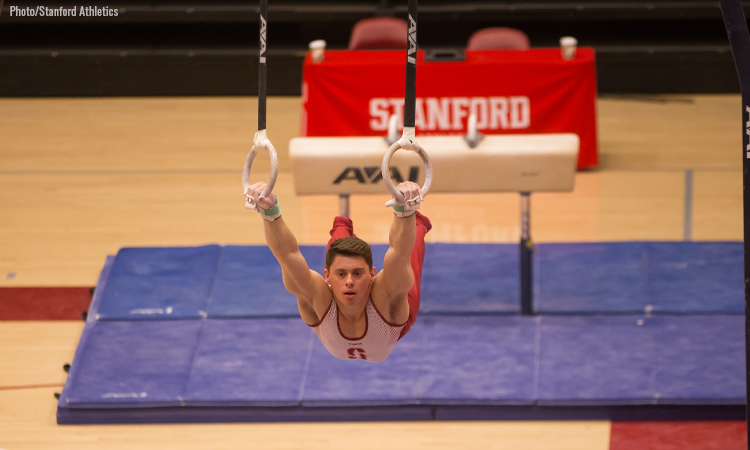 Upset was the theme of the weekend with four lower ranked schools taking victories over higher ranked programs. One MPSF and three Big Ten teams got to claim those surprise victories as this weekend provided us with one of the most exciting slates of meets to watch with Oklahoma standout senior Yul Moldauer also winning the prestigious American Cup on Saturday.

Diab’s new career high on his best event couldn’t have come at a better time to help lead Illinois to a surprising victory and reassert themselves as a contender for national titles.

The Buckeyes’ year got off to a slow start, having only broken 400 once before the Winter Cup break. This weekend they exploded to a new season high score to finally jump firmly into the top 10 for the first time this season and prove they can contend with the best in the Big Ten.

Although not competing in a collegiate meet, Moldauer won the American Cup over a strong field of international gymnasts. This stick on vault helped propel him to victory by .001 over former Michigan gymnast Sam Mikulak, the third straight American Cup title for Moldauer.

The Big Storyline: Senior Alex Diab won two events and recorded the highest score of any gymnast in the country on the rings over the weekend to propel Illinois to a double upset of Stanford and Minnesota in front of a home crowd. The Illini were able to win three events and four event titles to take the tri-meet victory. Stanford got a pair of event titles with Ryan Sheppard’s win on parallel bars and Brody Malone’s win on high bar, but a disastrous pommel horse rotation was too much for the Cardinal to overcome. The highlight for the Golden Gophers was Shane Wiskus’ win in the all around, the only win for Minnesota on the day.

Implications: In next week’s rankings, Stanford will remain ranked second while Illinois and Minnesota will flip rankings from this week.

Records: Diab’s 15.200 on rings set a new program record on the event.

The Big Storyline: Despite only winning two events, the margin of victory on pommel horse and parallel bars was enough to lift the home Buckeyes to the big upset over visiting Penn State. Ohio State had no trouble in its first five up five count format meet as it won four event titles and bested its previous season high score by over 10 points. Sam Zakutney did all he could for his Nittany Lions, winning the all around, floor and high bar, but Penn State counting scores in the 12’s on pommel horse and parallel bars couldn’t be overcome. In the battle for pommel horse supremacy, Ohio State’s Alec Yoder came out victorious in this one as Penn State’s Stephen Nedoroscik struggled with his set.

Implications: Penn State will remain ranked fourth while Ohio State will jump to seventh in next week’s rankings.

Records: Ohio State set new season highs on every event except for vault.

The Big Storyline: Iowa won the first four events, including a 2.5 point win on pommel horse, to upset Big Ten rival Nebraska while setting a new season high score. Hawkeye Jake Brodarzon was the only double winner of the day as he helped Iowa set new season high’s on every event except high bar. Nebraska was able to hit its third score over 400 in a row, but an opening pommel horse rotation with two scores below 13 ultimately lost the meet for the Huskers.

Implications: Iowa collected its first Big Ten win to improve its record to 1-2 while Nebraska falls to 2-2.

The Big Storyline: In Navy’s first meet of the weekend, the Midshipmen hit 400 for the fourth time this season to take down William & Mary, who broke the 390 barrier for the third consecutive meet. The Tribe were led by Andrew Lyubovsky who scored in the 13s on all four events he competed while also picking up a win on parallel bars. Navy won four event titles and outscored William & Mary by four points on pommel horse and high bar to earn the decisive win.

Implications: A low score in Navy’s second meet of the weekend led the Midshipmen to slip to ninth in next weeks rankings. William & Mary will remain ranked 15th.

Records: Navy’s Ryan Orce picked up the win on pommel horse while setting a new career high of 14.500.

The Big Storyline: In a closer than anticipated competition, Navy was able to post its second win over the weekend with a strong high bar rotation to pull away from host Springfield. Using some different lineups, the Midshipmen unfortunately posted a season low despite sweeping all six event titles, including two from Lucas Beltran. Springfield, with the strength of all around winner Stephen Lewis, was able to post its second highest total of the year.

Implications: Navy will fall to ninth in the rankings while Springfield will remain No. 16.

Records: Springfield’s 64.750 on rings is a season high for the Pride.

The Big Storyline: After a back and forth affair, Air Force used a near five point victory on high bar to pull the upset over visiting Army. The Black Knights freshman star Matt Davis won the all around and two event titles but couldn’t prevent Army from falling to a season low score. Air Force’s high bar rotation was highlighted by Lukas Texeira’s hit routine that outscored second place on the event by 1.7 points.

Implications: Both teams will remain the same in next week’s rankings.

Records: Texeira’s 14.600 on high bar is a new career high for the senior.

READ THIS NEXT: Road to Nationals Rankings: Week Nine