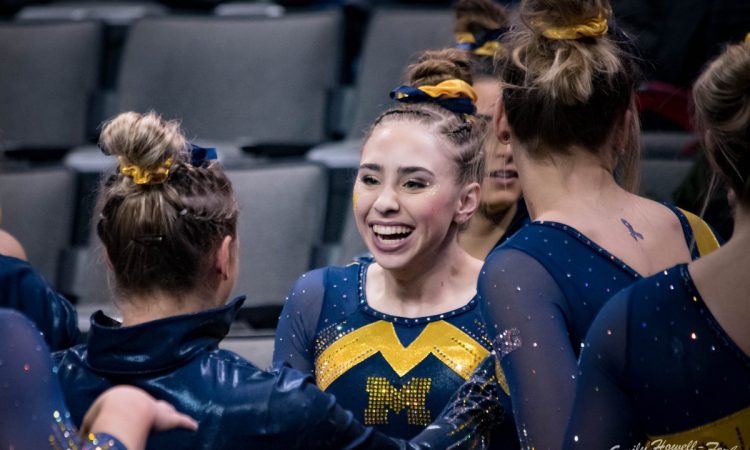 It’s the second matchup of the season in which we’re seeing perennial title favorite Utah go up against a team it doesn’t normally (except during postseason). It’s like getting a solar and a lunar eclipse in one year!

Michigan is riding high following last week’s huge team score of 197.750, capped off by Natalie Wojcik’s long anticipated 10.0 on vault. The team’s momentum has slowly been increasing, and last week was as good an argument as any for Michigan’s rightful place in the nationals conversation.

The Wolverines will need all that momentum and more this afternoon in Salt Lake City, where they’ll be going up against Utah in its always boisterous Huntsman Center. Utah has been consistent all season long, and though last week’s season high score of 197.625 wasn’t enough to top UCLA, it should very much be on par with what we should expect from Michigan today. That, coupled with what’s sure to be a loss-fueled sense of motivation, should make Utah an even more formidable opponent.

Our projected lineups vs. No. 5 Utah #GoBlue pic.twitter.com/QvPKLNsFy0

Waiting on lineups for Utah. It’s senior day here, and they did their senior celebration before the meet rather than afterwards as is usually customary.

We will start the meet on bars. Let’s see what we can do this week! #GoBlue pic.twitter.com/9gfBupX3OV

Burch VT (Utah): Another stuck yfull. Legs a little separated and lands that way too, but a stick for sure this time. 9.800

Skinner VT (Utah): Chest a little bit down but a stick. One of her better ones this season. Let’s see what we get this week with the score. 9.950.

Tessen VT (Utah): Didn’t get a great block on this 1.5, lands with knees pretty bent and has to stumble to the side. Unfortunate end. 9.750

Wojcik UB (UM): Best Jaeger of the bunch. A little off on the last handstand. DLO almost a stick but has to take a step back. 9.825

Utah tied its season high on vault tonight, and that was well-deserved after those sticks. Michigan wasn’t exactly off on bars, but there were just enough tiny errors to keep it below the Utes.

We will be on vault for our second rotation #GoBlue pic.twitter.com/gDYQrYDpu4

Change to the lineup with Heiskell up instead of Mariani!

Maxim VT (UM): Really solid Tsuk half. Some legs on the landing and a tiny step forward, but very dynamic. 9.825

Tessen UB (Utah): In for Dula today. Big jaeger. Full-in looked stuck but she had to hop back. 9.875

Merrell-Giles UB (Utah): Jaeger so high above the bar. Stuck full-in, didn’t look like she’d hold it but she did! 9.925

Skinner UB (Utah): Tkatchev a little close. Legs glued together today. Last handstand a tiny bit short. Some legs in the air on the full-in but sticks the landing again. 9.925

Wojcik VT (UM): Another 10 this week? Nope, 1.5 with a step forward. Controlled but not her usual stick today.

Stats down for those following at home, apparently.

We have a tight one today!

We move to floor next. #GoBlue pic.twitter.com/2jv9RZlfb1

You don’t really think of “The Lion Sleeps Tonight” as gymnastics meet pump up music, but that’s playing in Hunstman rn. Props to whoever made the playlist.

Lee BB (Utah): Good series to begin. Switch straddle half with a little check. Couldn’t see her feet but looks like a stick on that back full. 9.900

Funk FX (UM): Double pike, stumbles out but stays in, barely! Front full to front lay much better. Straddle leaps are good. Front 1.5 a little stumble out. Improved after the first pass. 9.775

Burch BB (Utah): Series looked good. Great position on the leaps and a perfect landing on the side leap. Stuck dismount. 9.900

Does every Utah gymnast have TSwift beam music? We shall see (haven’t watched Utah at home this year so don’t spoil for me in the comments :))

Osman FX (UM): Full-in looks effortless, lunges out with her chest down. Front tuck through to double pike, chest down again. Front Rudi was her best pass. 9.900

Soloski BB (Utah): TSwift again! I knew it was a theme. Front aerial to BHS. Split series nice. Front full into sissone, that was a bit tenatative. Front fall with a slight hop. 9.725

Brenner FX (UM): Full-in, great landing! Back 2.5 to punch front. I think I missed her leaps. Double pike really high but chest down. 9.875

Randall BB (Utah): Love her mount so much. BHS LOSO with the tiniest check. Sheep jump not quite high enough today. Great leaps. Perfect Rulfolva. Back double full to dismount, has to step back. 9.850

McLean FX (UM): Huge double tuck to open! This part of the music has to be in 50% of NCAA routines every year. FHS to front lay to front full. Dynamic straddle leaps. Big double pike to end. She gets the HEIGHT. 9.825

Merrell-Giles BB (Utah): Gorgeous position on the switch split. BHS BHS LOSO with one little check. Back 1.5 with a little step back. 9.850

Skinner BB (Utah): Trying to drop the 9.7 range score from Soloski. Bent legs on the BHS LOSO and a tiny check. Side aerial to split jump, legs not quite 180. Those second leaps were much better. BIG double tuck to end, I think it’s a stick?

Ooof, crowd is booing Skinner’s score. Not sure what exactly it was. It was a 9.850. Not sure how much higher they wanted? I wouldn’t top 9.9.

It’s still anyone’s meet at this point! Utah was a bit more tentative than usual on beam, but Michigan came through with some nice landings on floor. Let’s keep at it!

We will close this meet out on beam #GoBlue pic.twitter.com/LPjKu1PWmo

Jim talking about Kyla Ross: “Molecular cell and development major, whatever that is” 😂

Farley BB (UM): Triple series, bang on! Good flexibility on the lips. Unique 1.5 turn and she did it well. Side aerial to dismount, this one not as extended. Stuck the dismount. 9.925

Roberts FX (Utah): Punch front Rudi, so floaty! Double pike chest down a little. Nice back 1.5 to front lay to end. First of the last Huntsman performances for the Utah seniors on floor. 9.925

Jim is really too funny. “College is the fastest four years of your life…or for me, 9 years. True story!”

Osman BB (UM): Series a little off. Punch front with a check. Dismounts with a gainer full, stuck I believe! 9.725.

Thank you, Amanda, for giving us at least until the fourth rotation for the 4 inch beam reminder.

According to commentators, she’s getting married this summer!

Merrell-Giles FX (Utah): Piked full-in, really nice. 1.5 to front lay to front pike, effortless as well. Back rudi to straddle jump. That will be huge. 9.925.