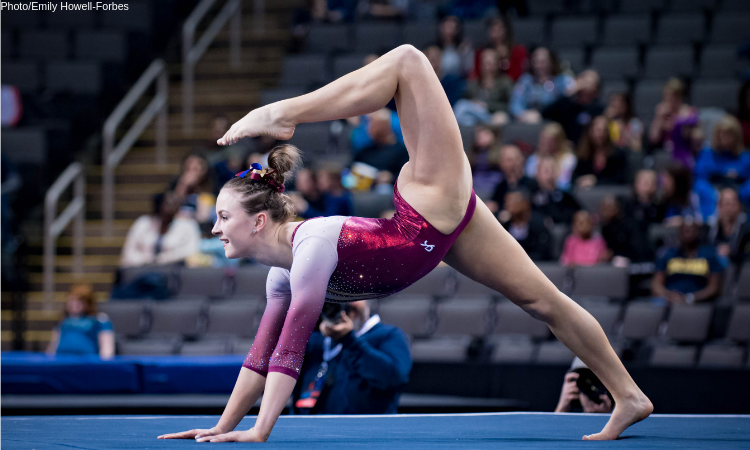 Now that all the Big 10 matches are over and the regular season title has been decided, the Big 10 teams will have several non-conference matchups. First up for Minnesota is Pittsburgh!

Pitt currently ranks 38th, two spots outside the regionals cutoff, and still has a few more low scores to drop to improve its NQS. This matchup with the 11th ranked team will be a great opportunity to get a big number. The Panthers have broken 195 twice in a row now, and will want to continue to build on that momentum.

Minnesota is coming off its 5th straight 196+ score at Elevate the Stage, so it will be looking to keep that streak going in order to guarantee a good seed at regionals.

Quaglia (Minn) – y full with a step back. Almost missed the table!

Miller (Pitt) – falls on pike jaeger, looks like her hand slipped because it was good in the air, small hop on dismount

Sales (Minn) – y full with a small slide back

Brechwald (Pitt) – falls on jaeger. Bummer because that would have been a good score, good bail, small step on dismount

Commentators are looking at the wrong lineups for Pitt, so ignore everything they say

Already not going to be a road score that Pitt can count towards NQS, but hopefully it can finish strong! Minnesota with a great vault rotation!

Spivey (Pitt) – y full with a hop back

Herbine (Pitt) – y half with a large step

Brechwald (Pitt) – y full with a hop back

Bochenek (Pitt) – y full with a large step back

Petrikis (Pitt) – y full with a bounce back

Minnesota on pace for a 197 with that great bars rotation! Pitt bounced back well from a rough outing on bars. Onto the next rotation!

Ceccarini (Pitt) – well that’s fun, pole was blocking first pass, but commentators said it was a nice double back, almost fell on second pass but saves it!

Herbine (Pitt) – some issues with music, but now we’re going. huge double tuck to open, great on leaps, front lay to front tuck full is good but I bet that last one was supposed to be layed out

Petrikis (Pitt) – great double pike to open, little off on front lay front full but saves it, and a nice double back to close

Spivey (Pitt) – great 2.5 to punch front, beautiful leaps, good double back, little off on rudi but pulls it off

Great beam rotation for Minnesota! Just needs a 48.900 on floor to hit 197. Not the best floor rotation from Pitt, but there were some nice routines in there. Glad to see Miller back!

Brechwald (Pitt) – great acro series to start, leap series is good, little off on front toss but pulls it off, stuck gainer pike!

Higgins (Minn) – good opening pass (stream froze so I missed what it was), 1.5 to front pike is solid, and a great rudi to close!

Loper (Minn) – great layout to rudi to open, 1.5 to front lay is great! and a great rudi to close

Season high for Minnesota by a lot! Those last three floors were great after the fall. Pitt closed out with a strong beam rotation. Great resilience after a rough first rotation.