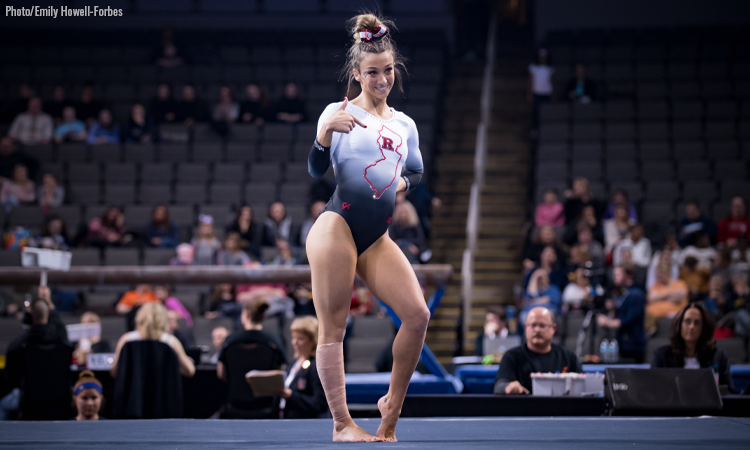 It’s a packed weekend for not only college gymnastics but elite and J.O. gymnastics as well with the Nastia Liukin Cup, American Cup, Jesolo and top NCAA meets taking center stage. With all the excitement, don’t let these other exciting college matchups fall by the wayside.

Why You Should Cancel Plans For It: The feeling we’ve gotten with Alabama, in spite of the improvement it’s seen over the past few weeks, is that it hasn’t quite peaked. Friday seems like the perfect night to do that with it being the last home meet for the Crimson Tide. However, don’t count out Auburn after the success its had this season, even though it stalled slightly last week at TWU.

What Else You Should Know Before Tuning In: Auburn has only beaten Alabama in 10 meets over the course of the history of both teams.

When You Need to Tell Your Friends You’re Busy: Saturday, March 2 at 4 p.m. ET

Why You Should Cancel Plans For It: This is a big one. Michigan is coming off a huge weekend at Big Fives, with a high 197 and vault perfect 10.0 in its pocket. Both teams are coming off a season high, and those totals are only 0.150 apart. At this dual last year in Ann Arbor, the Wolverines took the title; doing so again in the Huntsman Center is a big ask. This meet will be telling of how nationally competitive Michigan really is, and how high Utah’s ceiling can go. This is also a rematch of the “but she pointed right at the opposing team after her floor” non-drama, and comes one week after the “The newspapers! She’s not allowed to be mad!” also non-drama. So we’re sure the things happening outside of the gymnastics will be quality television as well.

What Else You Should Know Before Tuning In: Keep an eye out for a new E pass from Michigan’s Natalie Wojcik; she warmed it up last week, but it didn’t make it into her competition set. Also watch the all around battle in this one; Wojcik and Olivia Karas against MyKayla Skinner and Makenna Merrell-Giles is sure to be riveting. Emma McLean made her return to vault last week; watch to see whether she’ll only be vaulting on podium or if she’s back in the lineup for good.

When You Need to Tell Your Friends You’re Busy: Sunday, March 3 at 1 p.m. ET

Why You Should Cancel Plans For It: Buckle up! This is bound to be an exciting meet. Don’t act like you don’t want to see a rematch of the top two teams from 2018’s Super Six because you do, and it’ll be amazing. Plus, the Oklahoma and UCLA remain at No. 1 and No. 2, respectively, and this matchup could give us a preview of what the postseason has in store. We have the Sooners who have retained the top spot all season. However, not even they have been perfect. Oklahoma will be looking to improve on its beam rotation at West Virginia and get solidly back into the upper-197 range. The Bruins upset Oklahoma at nationals last year and have performed just as strong this season despite losing heavy hitters like Peng-Peng Lee. Kyla Ross is really coming into her own as an all arounder, even upgrading her vault to a Yurchenko one and a half and scoring a 10 on it twice. Margzetta Frazier and Norah Flatley are taking the NCAA gym world by storm as well, and you won’t want to miss the dynamic gymnastics that UCLA brings to the table as a whole.

What Else You Should Know Before Tuning In: Notably, Maggie Nichols did not compete last weekend at West Virginia, so keep your eyes peeled to see if she returns for the big meet against UCLA.

When the Meet’s Happening: Saturday, March 2 at 7 p.m. ET

Why You Should See the Error of Your Ways: N.C. State and New Hampshire are currently the top two teams in the EAGL, so this could be a preview of what is to come at the conference championship. Both teams have broken the 196 barrier once this year, as has Rutgers, so expect these three teams to battle it out for the victory. Not to be overlooked is Brown, which has been steadily improving as the season has gone on.

Why You Should See the Error of Your Ways: UIC and Lindenwood currently sit first and second in both the USAG and the MIC standings, so this is going to be an exciting competition! Also, with the season nearing the end, this may be one of your last chances to see UIC if 2019 does end up being its last. Penn might not be ranked as high, but it has an exciting freshman class that you don’t want to miss.

Why You Should Clear Space on Your DVR: Florida needs a win to make itself feel better following last week’s near miss against Georgia, and it will almost certainly get one here in Fayetteville. Earning a W will also clinch the regular season SEC title for the Gators. Regardless, Arkansas is likely to bring its A-game tonight after its most solid performance of the season last week.

Why You Should Clear Space on Your DVR: In the right circumstances, either team has a chance to pull out the win here. The ball might even be a little more in Georgia’s court because of the Bulldogs’ upset of Florida in Gainesville last week. We expect a close ending with Vega’s beam versus Kelley’s floor in the final sets.

READ THIS NEXT: The Mount: Week Nine MAG