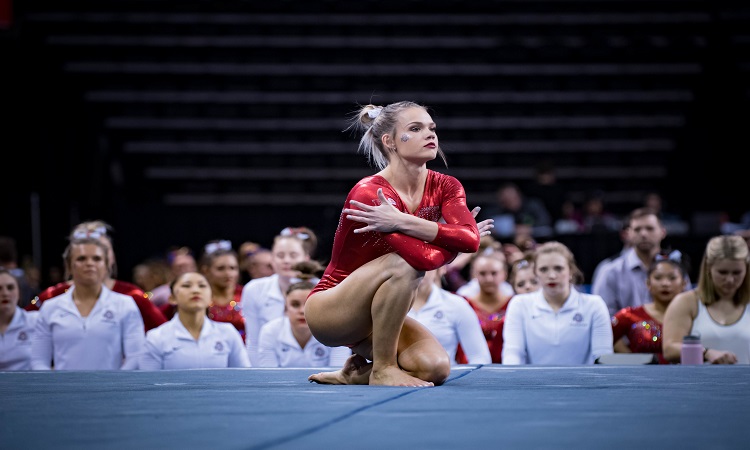 The Buckeyes got off to an explosive start in 2019. With four consecutive road scores over 196.000, they looked like a conference title contender and regional spoiler threat. February saw a downturn, with a handful of 194 and 195 scores. That was punctuated at Elevate the Stage on Saturday night when Ohio State finished last in the session with a 194.600, finding itself seeded in the afternoon session for Big Tens.

Second-year head coach Meredith Paulicivic led the team in a long huddle after the award ceremony. “It’s going to be a long bus ride home,” she said.

Despite the disappointment radiating from the team, it wasn’t a wholly bad performance; the Buckeyes were solid on bars in the first rotation, as well as vault to end the meet, and Jamie Stone came away with the floor title with one of the best back two and a half to punch front passes in the NCAA.

The performance wasn’t good enough because Paulicivic has set the bar high. “Getting a program from [No.] 25 to [No.] 10 to 15 where they want to be, it’s all belief.”

But what caused the sudden drop from successful 196-outings on the road to not even being able to put together a completely hit meet? “We’ve lost five people, that’s what happened.” Her team is plagued with injuries; not all season-ending—some simple like rolled ankles and bruised heels—but taken together, they present a challenge. “I’m missing four good beamers, two that were in my lineup all at the beginning of the year,” she said.

Beam was Ohio State’s weakest event on Saturday. Paulicivic noted that several gymnasts in that lineup learned the skills they’re performing in the offseason. Most DI gymnasts have been performing the majority of their skills for several years before even coming to college. “We’re a young team, a lot of kids that have never done a podium meet, haven’t been to the Nastia [Liukin Cup], haven’t been to J.O.s multiple times.”

Paulicivic knew this would be a building year. The Buckeyes have done extra flexibility training and focused on their positions. They’ve done intrasquads and pressure sets; Paulicivic is confident that the gymnastics ability is there. She said the team is working with a sport psychologist because the remaining problem is believing they can hit.

Building a program is about more than just hitting though. Paulicivic credits her tenure as a J.O. coach with the technical ability to teach new skills, and her time as an assistant at Utah for her marketing know-how; Ohio State set a new attendance record in its home opener, drawing 2,151 fans.

Floor choreography is another piece. The Big Ten has not traditionally been a strong conference for choreography, but that is changing. Paulicivic said it is her favorite part of coaching, and it shows. She spends hours listening to music until she finds something that’s right.

The Buckeyes will turn their focus to ending the season on a high note, and Paulicivic hopes a few more gymnasts will be healthy. She still has her eye on the conference championship since a team from any session can take the title. “It doesn’t really matter what session you’re in at Big Tens. You’ve got to go out and do your job, and then you’ve got to go to regionals and do your job.”

She views the tough outing as a learning experience for her team, and will keep working on their confidence. She noted that she can’t go out and hit for them.

“A lot of it is them coming to terms with, hopefully, being so irritated with what they did tonight, and knowing how much better they are; it has to come from within.”