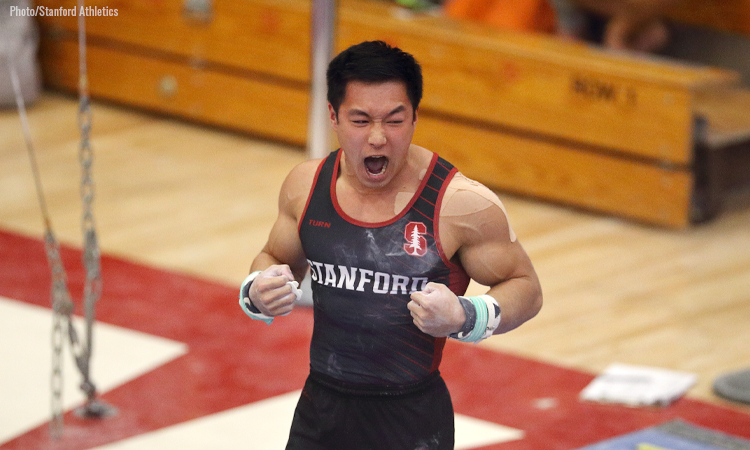 This week saw the men switch to the five up five count format, but it seemed to have little impact on teams’ success. The inability to drop a bad score didn’t prevent seven teams from posting season highs, and the extra pressure forced many individuals to step up their game for their teams.

The senior’s nation-leading all around debut performance began with this floor exercise that also now claims the nation’s highest score on the event.

The William & Mary senior matched the nation’s highest score on the event with his 15.300 performance on pommel horse Sunday.

With no high-flying or extremely difficult skills in his floor routine, Tsuji relies on his extremely clean form to continually best his competitors week after week.

The Big Storyline: The collegiate all around debut of senior Yul Moldauer boosted Oklahoma to a new NCAA leading score in its win over Michigan. Moldauer also grabbed four event titles for the Sooners who, thanks to Levi Anderson, were able to claim at least a share of every event title. Despite Cameron Bock not competing on vault and faltering slightly on horse and rings, Michigan was still able to post a score only a few points below its season high. Vault standout Emyre Cole’s Yurchenko two and a half matched the score of Anderson’s Tsuk double pike to nab the Wolverine’s only event title of the day.

Implications: Oklahoma will increase its lead over Stanford to maintain the top ranking while Michigan will remain third.

Records: Moldauer’s all around total now leads the NCAA by over three points and his 15.300 on floor is now the leading mark on that event.

The Big Storyline: Although just missing out on joining Oklahoma in the 420 club, freshman Brody Malone came up big for the Cardinal yet again as he led Stanford to its sixth victory over rival California this season and a new season high. With only two scores above 14, the Golden Bears struggled throughout the meet and were unable to break 400 as they did before the Winter Cup break. Athletes from Japan also competed alongside the two collegiate teams this weekend, and with a score of 424.500 they would have posted the nations top score from the weekend. Click on full results to see the scores of the Japanese competitors.

Implications: Both teams will likely remain ranked the same, but Stanford will lose a bit of ground to Oklahoma in the race for the No. 1 ranking.

Records: Stanford is now 6-0 over California this season and swept all the event titles for the third time.

The Big Storyline: Nebraska used a season high score to seize the opportunity to upset the fourth-ranked Golden Gophers with their star Shane Wiskus only competing on three events. Anton Stephenson grabbed two event titles and junior Evan Hymanson won the all around in his first six-event performance of the year to help the Huskers eke out a victory. Minnesota was still able to grab three event titles but a rough pommel horse rotation was too much to overcome for the Golden Gophers. UIC also struggled on pommel horse, but the Flames were still able to post a season high score by over five points.

Implications: Nebraska is now 2-1 in Big Ten duals while Minnesota falls to 1-2.

Records: Hymanson’s 81.000 in the all around is only his second all around performance in college and beats his previous score by over nine points.

The Big Storyline: Penn State was able to cool off Navy’s hot start to the season and use a season high score to easily best the visiting Midshipmen, as well as Air Force. Navy unfortunately recorded a season low due to some problems on parallel bars, but Ben Provost was still able to keep his momentum going, winning floor to steal one event title away from the Nittany Lions. Air Force was almost able to defeat fellow service academy rival Navy but ultimately fell just short. The Falcon’s high bar superstar Lukas Texeira also faltered on his signature event, giving way for Penn State’s best high bar swinger Sam Zakutney to grab the title.

Implications: Penn State’s ability to join the 410 club will jump it to fourth in next week’s rankings. Navy will fall slightly to eighth and Air Force will remain 13th.

Records: Isaac Hammet’s huge 14.800 on rings is a career high for the junior.

The Big Storyline: In its first of two meets of the weekend, William & Mary was able to win four event titles and post a season high score, but all of that wasn’t enough as it fell to host Army. Cole Casanova had another standout meet for Army, winning the all around and two event titles for the only individual wins for the Black Knights, who posted their second highest score of the season.

Implications: Both teams will remain ranked the same in next week’s rankings.

Records: Army’s Matt Davis placed second in the all around thanks to new career highs on vault, parallel bars and high bar.

The Big Storyline: Arizona State was able to come out victorious at home in the Sun Devil Classic thanks to sophomore Kiwan Watts’ win in the all around and on three events. Kirk Malm was also a double event winner for the Sun Devils who bested second place Washington by over six points. Washington was led by its lone event winner Nathan Tsuji, who added another floor title to his repertoire.

Implications: In next week’s rankings, all three schools will remain ranked the same.

The Big Storyline: In the Tribe’s second meet of the weekend, it yet again posted a season high score, getting the win this time. Jacopo Gliozzi, Andrew Lyubovsky and David Watkins all repeated as winners on their events with Lyubovsky also winning on parallel bars Sunday. Springfield placed second in the tri meet thanks to Stephen Lewis’ wins on floor and in the all around while Temple placed third but bested its season high score.

Implications: Heading into week nine all three teams will remain ranked the same.

Records: Gliozzi’s 15.300 on pommel horse is a career high and matches the nation’s highest score of the season on any event.