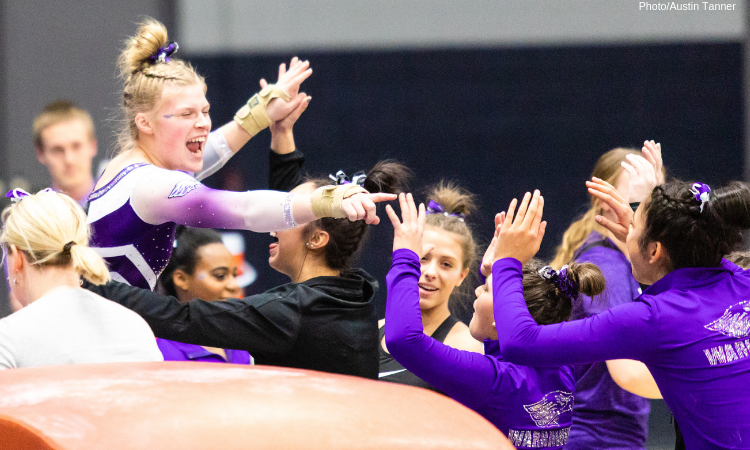 Last Friday, we saw UW-Oshkosh hit an incredible meet and take down UW-Whitewater for the first time in years! The question is, can the Titans do it again? The Warhawks will certainly be out for revenge and a have an advantage in that they are competing at home. However, it’s possible we could see the return of reigning national bar champion Baylee Tkaczuk, which would give the Titans a leg up on an event that both teams have been struggling to hit this season.

March-ins have begun! Looks like the stream is mostly going to focus on UW-Whitewater, so I’ll also be trying to follow along with UW-Oshkosh’s Instagram live video… bear with me!

Rondeau (UWW) – Clean Yurchenko pike with a step back

Lewellen (UWW) – Another huge Yurchenko lay with a big hop back

Missiaen (UWW) – Hand front with a step back

North (UWW) – Yurchenko lay with a great landing! Chest was nice and tall just took a small step to the side

Marshall (UWW) – Fantastic Yurchenko full with a great landing! No pike down, just a step back

Tkaczuk (UWO) – She’s back! Great tkatchev to pak combo, a little too powerful on the cast into the pirouette but works out of it, pikes down the double lay a bit and has to take a step forward

Hammond (UWO) – Catches the jaeger a bit close but works out of it, tiny leg separation on the bail, not quite enough rise in the double lay and has to pike down and puts her hands down.

The Warhawks had a fantastic start to their afternoon and hit 6/6 vaults. Lauren Marshall led the group, scoring a big 9.675. The Titans didn’t fare quite as well over on the bars, but we did, in fact, get to witness the return of the national champion Baylee Tkaczuk, so that was exciting!

Bernardo (UWO) – Y lay with a bit of a pike down

Helmke (UWW) – Beautiful blind full into an aggressive tkatchev… unfortunately she has too much power and is off. Good blind to straddle back and pulls around the double lay dismount

Jarvis (UWO) – Y full! some leg separation and chest is bit low on the landing but overall pretty good

Turek (UWW) – Feet issues throughout but makes the blind to Jaeger which she’s struggled with the last few meets. Some more leg problems on the bail and blind full to double, but she works through it and gives the Warhawks another hit set

Whitewater looks like a completely different team from what we saw last week! So much more confident and clean. After a disastrous bar rotation last weekend, the Warhawks pulled things around and didn’t have to count any falls today. The Titans also had a good rotation, highlighted by three twisting vaults!

Fossum (UWW) – Wobble on side aerial but hangs on, BHS LOSO is dead on, good cat leap to gainer full

Olinger (UWW) – Tiniest of wobbles on the BHS LOSO, solid leaps, not quite full split on her jumps, manages to pull around the back full after a crooked side aerial

Bernardo (UWO) – Big double pike to open, RO 1 1/2 to front lay with a little slide back

Helmke (UWW) – Good front toss, holds on to the BHS LOSO, good jumps, barely pulls around the RO 1 1/2 and lands super squatty but stays on her feet

Jarvis (UWO) – Great front through to double tuck, huge double pike to finish! That was a fantastic ending to a great rotation for the Titans!

That was a really great rotation for both teams, but the Titans really shined on floor and didn’t have to count any scores lower than a 9.550. This is super close and exciting heading into this final rotation… especially when you remember that UWO scored over a 48.000 on beam last week.

Olinger (UWW) – Good front full to front lay, RO lay middle pass, a bit low on the rudi but overall a solid routine to open with

Gilot (UWO) – Slight balance check on BHS LOSO, LOVE LOVE LOVE her wolf jump punch front, switch leap switch leap is great! a little too much power on the RO 1 1/2 dismount but stays on her feet

Fossum (UWW) – Chest super low on double pike and might have grazed her hand on the floor, oob on front full front lay, very nice Rudi to finish

North (UWW) – Double tuck is made but low and crunchy landing, down on front lay front full… looks like she’s in a bit of pain but pushes through the set. Slow to get off the floor and immediately sits down. Hopefully she’s okay.

The UWW stream froze for about two routines, so I missed Briscoe’s and Hutton’s sets. UWO had a nice beam rotation. Not quite as stellar as last weekend but as far as I saw, everyone stayed on the beam at least.

UW-Whitewater looked way more confident overall and showed some great improvements this weekend as it put up a fierce fight against the Titans. However, UW-Oshkosh still pulled off a close win and should feel really good about its outlook heading into the post-season.

READ THIS NEXT: The DIIIsmount: Week Seven