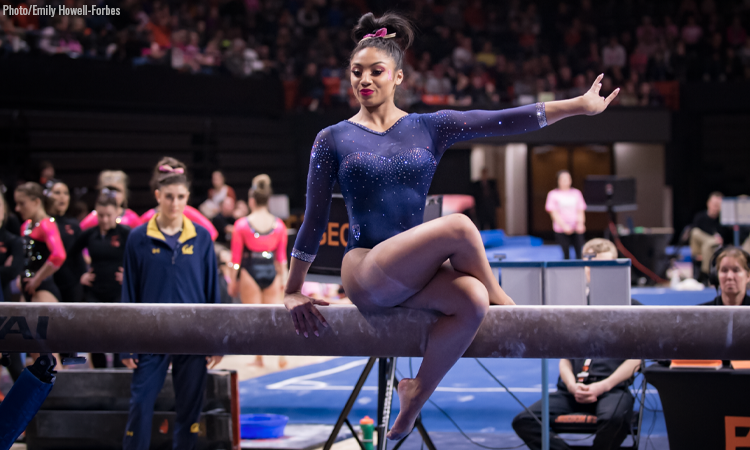 It’s the final week for teams to post a big number before the switch to RQS and teams are able to drop any early-season misses. While the rankings shake up will be exciting, don’t lose sight of the exciting meets this week with the Big Five competitions providing important implications for the Big Ten’s conference championships in a few weeks to the big UCLA-Utah Pac-12 showdown in Salt Lake City.

When You Need to Tell Your Friends You’re Busy: Saturday, February 23 at 7:00 p.m. ET on FloPro

Why You Should Cancel Plans For It: Three teams from this meet will qualify to the evening session of the Big Ten Championship, as will three teams from the Friday session. Both sessions are really can’t-miss, but we’re billing this one because of the huge potential for upset. Michigan has two 197-plus scores in a row, but Minnesota has been sailing with high-196s and Ohio State shouldn’t be counted out despite some lackluster performances the past few weeks. Plus, Minnesota and Michigan both remain undefeated in the Big Ten, so this matchup includes regular season conference title implications. If that’s not enough excitement for you, Lexy Ramler will go head-to-head with Olivia Karas and Natalie Wojcik in the all around, and Ramler (No. 1) and Wojcik (No. 3) will battle for the beam title. So, yeah, it’s going to be good. We predict the Wolverines, Gophers and Buckeyes will easily sail into the night session, but keep in mind that Rutgers has scored a 196 this year. Not enough pressure? All five teams will be looking for one big road score before RQS kicks in next week.

What Else You Should Know Before Tuning In: In the Friday session (7:00 p.m. ET on FloPro) be sure to keep an eye on a team upsetting No. 15 Nebraska. At last year’s Big Five, Nebraska had a melt down and landed in the early session of the championship. It will be up against No. 24 Penn State, No. 32 Maryland, No. 40 Iowa and No. 43 Michigan State. A big hit on the day could lead any team into the night session if Nebraska falters. If you don’t pay for Flo, don’t worry. Emily M will be there blogging and Emily HF will be photographing. We’ll bring you all the action from both sessions.

Why You Should Cancel Plans For It: It’s a showdown between the top two Pac-12 teams and two top five teams overall! With that, we should get a nice preview of how they match up head-to-head in advance of the conference championship in March. There’s a ton of talent, a ton of great gymnastics (who wouldn’t want to watch Kyla Ross and Mykayla Skinner face off?) and a ton of potential—this is definitely a meet you don’t want to miss.

What Else You Should Know Before Tuning In: Mykayla Skinner has been held out of floor off and on for the past few weeks as she battles fluid buildup in her ankle. UCLA tinkered with its lineups last week against Arizona—watch to see if there are any changes against Pac-12 rival Utah.

Why You Should See the Error of Your Ways: Both teams are coming off strong performances. The Thunderbirds are beginning to show their full potential, and BYU has shown it’s not one to mess around with either. These two teams are definitely up-and-coming in the MRGC and could challenge reigning conference champions Boise State for the conference title; this meet will surely be a preview of what’s to come.

When the Meet’s Happening: Saturday, February 23 at 5 p.m. ET

Why You Should See the Error of Your Ways: Washington is building up slowly despite a streak of fairly tightly-scored meets, but it needs to sort out its uncharacteristically wobbly beam rotation, which has only cracked 49 twice this year. California will need to find a way to replace star Toni-Ann Williams’ three events after an Achilles tear ended her college career last weekend. The two teams’ season averages are less than two tenths apart, so this meet could easily go either way.

Why You Should See the Error of Your Ways: Denver has exceeded expectations thus far, even surpassing the 197-mark for three straight meets and holding a ranking that is tied for the highest ever in program history. Boise State has proven its worth over the course of 2019, relying on its underclassmen to show that it is here to stay despite losing some of its high-scorers from last season. Iowa State is an exciting team to watch—its floor routines never disappoint, and it possesses many of our favorite under-the-radar former international elites.

Why You Should Clear Space on Your DVR: Come on! It’s a top 10 SEC matchup in Florida. That hasn’t gotten your attention yet? We know Florida home scoring well, and it really ups the odds for the “no perfect 10s in the SEC yet” streak to be broken tonight (looking at you, Trinity). Granted, we’ve said that about other meets this year and nothing has come to pass. Either way, the anticipation alone should make this a meet you don’t want to miss seeing at some point—whether it be live or via DVR.

Why You Should Clear Space on Your DVR: While Oklahoma is the heavy favorite and should come out on top barring disaster, West Virginia will be looking to use this matchup with the No. 1 team in the country to up its game. The Mountaineers are currently ranked in the top 10 on floor, but the other three events have been rather inconsistent. Will West Virginia be able to put all four events together and score its second 196 of the season? Kirah Koshinski scored a near-perfect 9.975 on floor at the most recent meet. Will she finally get that elusive perfect 10? Maggie Nichols has been limited to bars and beam for most of the season and just added vault back last week. Look to see whether she competes floor or waits another week or two.

READ THIS NEXT: The Mount: Week Eight MAG