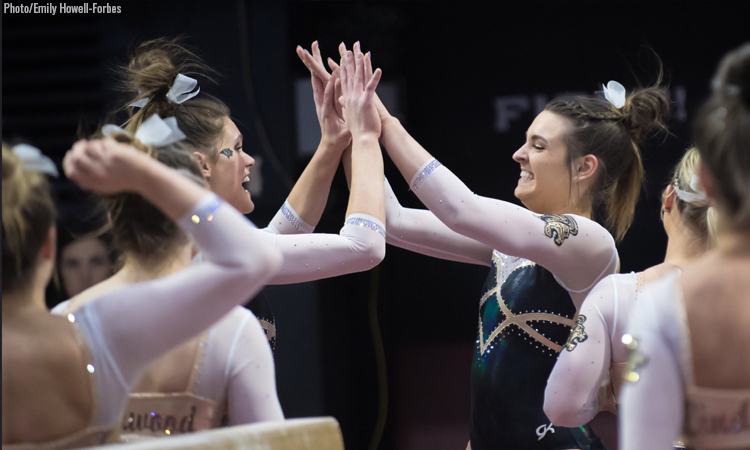 USAG rankings have settled into a predictable order: The sum total of the ranking changes this week is a straight swap between No. 5 and No. 6, and when we enter RQS rankings next week we’re not expecting any major changes either. That doesn’t mean things aren’t exciting though. This week, UIC broke back into the 195 range, Lindenwood scored a stunning upset over a DI opponent and Southern Connecticut State’s standout freshman Hannah Stahlbrodt set yet another new program record.

Salamone spent the early part of the season hanging out in the high 9.7s on bars, which is great for most gymnasts, but we knew she could do better. Scoring two 9.900s in a row is much more her style, and she’s beautiful while she does it.

The TWU senior had a great double-meet weekend on floor, scoring a 9.850 and a 9.825. On Sunday at Lindenwood, she stuck her opening double pike spectacularly to win the floor title.

We heard some people wanted a video…this is from 2 weekends ago pic.twitter.com/XPRAwn0dJg

Patient’s creative beam acro series made some waves on social media this weekend. It’s not news that Cornell is doing creative gymnastics—Patient is one of two gymnasts on the roster who rebound out of a kneeling position, and the Big Red regularly fields four or more different vaults in its lineup—but it’s exciting that it’s getting mainstream recognition.

The Lindenwood story, which we believe is run by freshman Paige Sorensen during meets, makes us crack up every week with its ridiculous puns and amazing reaction stickers.

Honorable mention goes to Penn, which reliably and hilariously makes hashtags and rhyming jokes based on its athletes’ names.

The Big Storyline: Lindenwood excelled in this neutral-site meet that happened to be in its hometown—always a RQS boon—to upset Division I and No. 23 Iowa State and approach its season high score from last week. The Lions look incredibly clean in 2019 and only need a little more consistency to threaten for 196s. Texas Woman’s had a fluke disaster meet, counting falls on both bars and beam, while SEMO put together its second highest score of the season.

Implications: All three USAG teams competed again later in the weekend, so ranking changes from this meet were irrelevant.

Records: Anna Kaziska’s 9.875 on beam and Mackenzie Slee’s 9.800 on vault are career highs. Ryan Henry set a career high in the all around.

Controversies: The live scores for this meet were an absolute disaster, and the Flo commentators had no idea what they were talking about for most of the meet. We heard the phrase “Lindenwood Tigers” about fifty times more than is acceptable.

The Big Storyline: UIC broke back into the 195 range, though it still has plenty of room to grow. Freshman Alisa Sheremeta only competed beam this meet, but Kayla Baddeley shone with three career highs. SEMO had another bars meltdown that led it to lose to its conference-mate by almost 10 points.

Implications: UIC remains at the top of the USAG and should continue to lead when RQS kicks in, though Lindenwood will eventually become a threat.

Records: Baddeley’s vault-winning 9.875 and her bars and all around scores were career highs, as was Ashley Albrecht’s floor routine. This meet was the first time since 2003 that UIC has scored 195-plus in five or more meets in one year.

The Big Storyline: Cornell had a successful week at West Virginia, coming up around a point short of its season high from last week but still beating all its previous road scores by around two points. Senior Malia Mackey sat the meet out for unknown reasons.

The Big Storyline: Lindenwood lacked the luster of its incredible win early in the weekend, but it was able to keep it together at home to eke out a win against conference rival Texas Woman’s. Courtney Mitchell and Bria Northrop continue to have one of the most fascinating all around rivalries in the country, with Mitchell grabbing the all around title by under a tenth.

Implications: Lindenwood remains at No. 2 in USAG while Texas Woman’s’ will drop to No. 6 as a rough Friday allowed Air Force to sneak up a spot.

Controversies: The stream lacked audio through most of the first rotation and then failed entirely about halfway through the fourth, so we missed some critical routines.

The Big Storyline: Yale won convincingly on its senior day, taking all four events versus Brown and sweeping the individual podium on beam and floor. Seniors Jessica Wang and Kiarra Alleyne were able to pick up individual titles at their last home meet. Brown had one of its better meets of the year and is just one more solid week away from being able to drop its nightmare opening weekend scores when RQS kicks in.

Implications: Both teams will stay steady in the rankings this week.

The Big Storyline: Seattle Pacific squeaked in only a quarter tenth under its season high in its second home meet of the year. Junior all arounder Darian Burns led the Falcons with one of her best ever all around marks while junior McKenna Zimmermann set two career highs. Air Force had an individual event champion on each event, including two from junior Anna Salamone, to lead it to a comfortable win that is also its second highest total of the year.

Implications: Air Force was able to jump Texas Woman’s to move up to No. 5 in USAG rankings and No. 54 nationally.

Records: Burns’ all around score is 12th-highest in SPU history and her fourth above 39.000.

The Big Storyline: West Chester opened its incredible double meet weekend with a season high at home, led by a career high and event-winning bars routine by Melanie Wojewoda. The Golden Rams just squeaked in over conference rival William & Mary.

Implications: West Chester’s ranking did not change this weekend.

The Big Storyline: West Chester’s total dipped a little at its Sunday meet, but it had some individual standouts. Sophomore Yoli Nodarse tied the Golden Rams’ program record on beam, and West Chester swept the individual event titles.

The Big Storyline: SCSU’s Hannah Stahlbrodt continues to be the story of Division II, setting yet another all around program record for the Owls. This one, a 39.050, beat her own personal best by almost four tenths and the pre-Stahlbrodt program best by over five. The current SCSU squad is incredibly young; 15 of 24 routines at this meet came from newcomers.

Implications: The Owls remain at No. 9 in USAG, but they’re looking increasingly able to threaten West Chester for a top-eight spot.

Records: In addition to Stahlbrodt’s incredible day, the Owls set a program record of 48.825 on floor.

READ THIS NEXT: The Dismount: Week Seven WAG