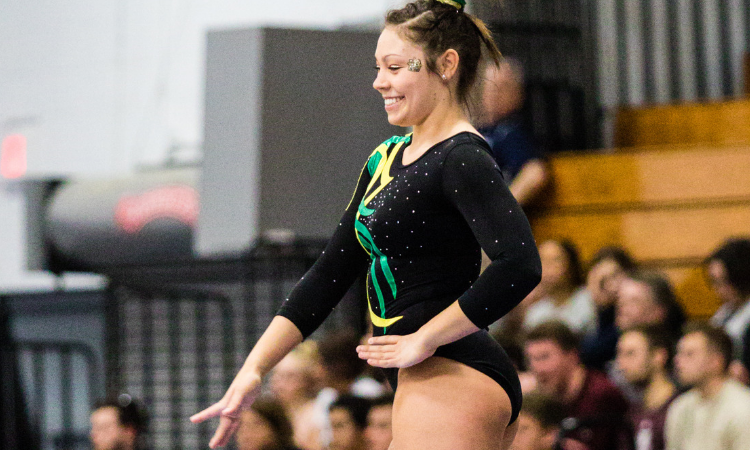 Scores were flying over on the east coast this weekend with five out of the six teams besting their top scores this season by at least two points. On the WIAC side, we also saw Gustavus record its top score of 2019.

This past weekend, Candis Kowalik, a three-time floor All American, hit three incredible passes and scored a huge 9.875. Not only was this the highest score in DIII this week, it’s currently the highest score any DIII gymnast has received this season! Unfortunately, you aren’t able to see some of the passes very well in the video from this weekend, so be sure to also check out this video from a few weeks ago.

After missing the first few weeks of season due to a minor injury, Kiloran has come back strong and ended on top of the bars standings this week in the team’s dual against UW-Oshkosh. Her 9.525 was enough to pass the reigning WIAC champion and a past national champion.

Record Performance of the Week

We have a tie for our record performances this week. First up is the Rhode Island College vault and bars squads which scored school records this past weekend at Brown. The team went on to score season highs on beam and with overall team score as well.

Our second performance comes from Cortland freshman Megan Hanley who scored a 9.825 on beam to tie the school record.

The Big Storyline: Struggles on bars and floor held Springfield back from reaching the scores it has gotten the past few weeks. However, the Pride still recorded some solid performances. Tali Twomey topped their vault and floor lineups while Jess Clemens and Sara King claimed the top spot on bars and beam.

Implications: Springfield stays in the third spot in the NCGA-East, but both Ursinus and Cortland put some pressure on this week after scoring over 186.000.

The Big Storyline: This was an awesome meet for the DIII teams here with Ursinus and Cortland both scoring season highs! Even though they only fielded five competitors on every event besides beam, those gymnasts competed fiercely and led the Bears to a score nearly three points higher than their previous best. Cortland was finally able to put out a full lineup of six on every event for the first time this season, and it really paid off. The Red Dragons scored two points higher than their previous season best and freshman Megan Hanley tied the school record on beam with a 9.825.

Implications: Cortland moved up three spots in the rankings.

The Big Storyline: This was a solid meet for RIC. The Anchorwomen saw a four point improvement over last week’s performance and recorded season highs on vault, bars, beam and with the team score. The 47.200 on vault was a school record and was led by Allie DiBiase’s 9.550. DiBiase also scored a 9.175 to lead the bar squad to a school record 44.375 as well.

Records: RIC scored a school record on vault and bars.

The Big Storyline: All three of these teams scored season highs with Brockport becoming the first NCGA team to break 190.000 this year. The Golden Eagles put together a massive floor rotation for a 49.175 which topped DI Cornell. Their lineup was highlighted by Candis Kowalik, Alexis Castellaneta and Kimberly Musall who all scored 9.850 or higher and placed in the top five. Ithaca also had a fantastic day capped off with a beam title from Nina Bustamente-Nadeau and a fifth place finish from Lauren Hanson on bars.

Implications: Brockport will move up to No. 1 in DIII and Ithaca will pull ahead of UW-La Crosse to move back into third.

Controversies: Scoring was a bit high at this meet with some obvious deductions going seemingly unnoticed especially on bars and floor.

The Big Storyline: After two weeks of struggles, UW-Whitewater proved it shouldn’t be counted out of the nationals discussion. The Warhawks still had some areas of weakness, but they really shined on floor where they scored a meet-high of 47.100. Hamline struggled the first half of the meet but pulled things together in the last two rotations with Katie Kalland and Darby Slater claiming the beam and floor titles.

Implications: The Warhawks solidified their third spot in the WIAC while the Pipers ended up falling into fifth behind UW-Oshkosh.

The Big Storyline: The Eagles dominated this competition taking at least the top two spots on every event. Sam Weyker and Ally Blixt were big contributors, each recording two top finishes. However, UW-Oshkosh also had a great meet, finishing with its second highest score of the season and recording six top five finishes. Olivia Keller was the Titans’ top performer on both beam and floor while Jessica Bernardo took the all around title.

Implications: UW-La Crosse will fall to No. 4 in the NCGA after some big scoring out on the east coast. UW-Oshkosh will remain No. 7 just 0.060 behind Hamline.

Controversies: Vault scoring was low and undifferentiated with three people tying for the title with a 9.425 and the top seven separated by only 0.050.

The Big Storyline: The Blue Devils continue to dominate and shine taking the W yet again and claiming all five individual titles. Shadae Boone had a pair of wins while Mikala Bugge claimed her second all around title of the season. The Warriors had a successful meet and scored their second-best score of the season. Natalie Koehler and Leah Messelt both posted a top three finish on beam and floor, respectively.

Implications: After a big score from Brockport, UW-Stout falls to No. 2 for the first time this season. Winona also drops one spot after UW-Eau Claire hit a solid meet on Saturday.

The Big Storyline: For the second week in a row, we saw Gustavus score a season high as it steadily approaches the mid-180.000 range. The Gusties claimed three individual titles thanks to strong performances from Sam Ardy on bars and Amanda Malo on floor. Malo also topped the all-around standings. The Blugolds had an incredible meet as well, improving by a massive six points. They also recorded seven top three finishes including the top three spots on beam.

Implications: UW-Eau Claire’s solid performance moves them ahead of Winona.

READ THIS NEXT: The Dismount: Week 6 WAG