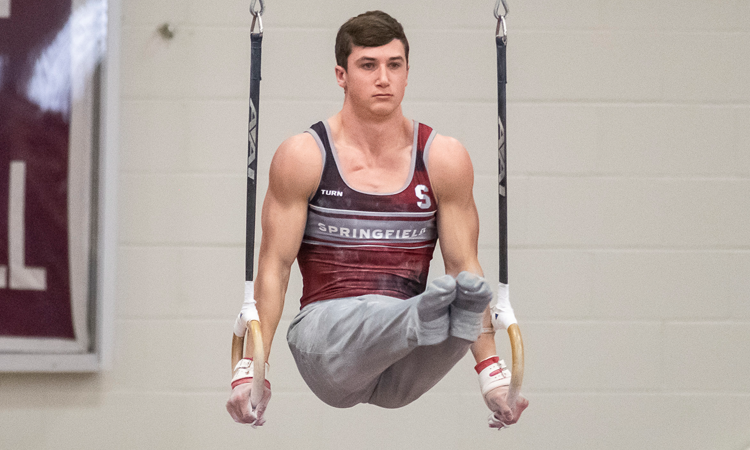 The All-Academy championships took center stage this weekend, where an eight year win streak was snapped by one of the most surprising teams of the season so far. Several teams were able to sweep event titles in their matchups in a weekend that served as many competitors’ final tune-up before next weekend’s Winter Cup.

Okay, seriously who put the velcro on Shane's feet this morning?! He's not going anywhere! Another career high of 14.200 on high bar. pic.twitter.com/X4IJAOSr07

This was the final routine to cap off an outstanding meet for the sophomore and former national team member.

The freshman standout for California has been steadily improving with each meet, and this aggressive set on pommel horse was one of the highlights of the past weekend.

“Don’t Sleep On Us” Performance of the Week

Navy is not one of the traditional team powers in collegiate men’s gymnastics, but this year it is performing like it is. The Midshipmen have broken 400 in three meets so far this year and will be ranked ahead of several Big Ten and MPSF teams after this weekend. Look out for them to disrupt some meets in the near future.

The Big Storyline: Uncharacteristic struggles on pommel horse and parallel bars negatively affected the Sooners’ score, but Oklahoma was still able to go on the road and defeat Iowa. Genki Suzuki’s wins on those two events were bright spots for Oklahoma, whose hold on the top ranking may soon be in jeopardy with this season low score. The Hawkeyes were only defeated by about eight points, one of the smallest margins of loss to the Sooners by any team so far this season. Andrew Herrador won the all around title to claim Iowa’s lone win of the day.

Implications: Oklahoma retains its top ranking while Iowa will slide down to No. 10.

Records: Herrador’s total in the all around is only half a tenth short of his career high.

The Big Storyline: Although California’s Darren Wong won the event, Stanford posted the nation’s highest pommel horse total this season while beating the Golden Bears in Berkeley. Wong’s win on pommel horse in addition to his all around win were the only titles for California, but it was still able to beat its season high team score by nearly six points and break the 400 barrier for the first time this season. Freshman Brody Malone continued to impress for Stanford, adding a parallel bars title this week to his already impressive resume.

Implications: California will move up to ninth in the rankings while Stanford inches even closer to regaining the top spot, with a three score average only .616 behind Oklahoma.

Records: Stanford is now 5-0 against California this season, beating the Golden Bears every weekend of the season so far.

The Big Storyline: The lone Sunday meet saw Penn State easily beat ECAC foes Springfield and UIC. Wyatt Tyndall was the star of the afternoon for the Nittany Lions with his wins on floor and high bar, but Springfield’s Stephen Lewis matched Tyndall’s double win success by taking the all around and vault titles. Nick Smiley led the charge for UIC with his third place finish on parallel bars, matching teammate Sam Montague’s placement in the all around.

Implications: Although Penn State won the meet, its ranking will drop one spot next week since its score was significantly lower than many posted on Saturday.

Records: Montague’s 70.450 in the all around is his season high and the second highest total in his career.

The Big Storyline: Led by double event winner David Toussaint, Navy was able to win the All-Academy championships while besting its season high score by over seven points. Air Force also posted a season high score thanks to Jonah Urlaub’s win on vault and runner-up finishes on pommel horse and rings. Cole Casanova and Matt Davis, who are consistently Army’s best performing gymnasts this season, won event titles for the Black Knights who fell just short of a season high.

Implications: Navy’s huge team total will jump the Midshipmen to seventh in next week’s rankings while Army and Air Force will remain ranked 12th and 13th, respectively.

The Big Storyline: Shane Wiskus dominated the second half of the meet, winning all three events to propel Minnesota to a season high score and a win over visiting Arizona State. The Golden Gophers swept all the event titles as senior Justin Karstadt picked up a pair of wins in the all around and on still rings. Arizona State’s Kiwan Watts only performed on three events, likely resting for Winter Cup, and struggled on all three which reflected the Sun Devils’ performance in Minneapolis as well.

Implications: Neither team’s ranking will change but Minnesota’s score moves its average closer to No. 3 Michigan’s.

Records: Every single one of Minnesota’s event title winners did so while setting season highs on their respective events.

READ THIS NEXT: The Dismount: Week Six WAG