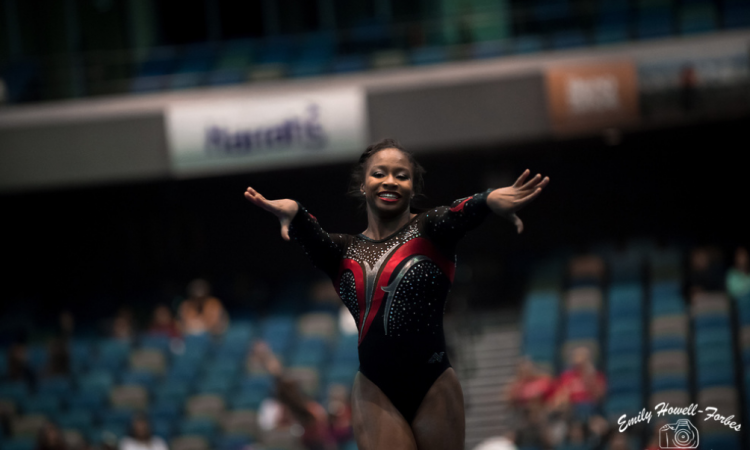 Today’s matchup between Stanford and Arizona State marks a fairly even Pac-12 contest. All things considered, these teams should be happy with their top 25 placements given the challenges they’ve faced in years past. But there’s never 100-percent satisfaction when the possibility for more exists. They’ll both see today as a potential win that could quickly boost their standings in conference and in the NCAA.

There have been challenges for both teams this season, specifically when it comes to depth. With Stanford, it’s how exactly that depth should be used to best cover deficiencies. Stanford lost one of the top weapons in the NCAA last season in Elizabeth Price and is only just starting to get in the groove without her. Kyla Bryant has stepped up in the clutch all around capacity, but we’re still learning how exactly the large freshman class fits into lineups with their varying strengths.

Arizona State also has its go-to all around star in sophomore Cairo Leonard-Baker, but injuries are starting to pop up that could prove quite problematic given the lack of serious lineup options. In addition, it’s circled around the 195 range all season long, never going below it but never getting out of it except for one 196.125.

Either way, these teams are fairly evenly matched, and it should be an exciting competition. It’s also my first time covering a Pac-12 meet; not that I don’t love the SEC, but I’m excited for a change!

Happy Sunday, everyone! In big news, we’re told by Sam that Kyla Bryant isn’t competing in the all-around today as she’ll be resting on vault.

Someone who WILL be competing on vault: ASU freshman Stephanie Tripodi, for her debut on the event!

The #GymDevils are starting on vault. Freshman Stephanie Tripodi is competing for the first time this season! pic.twitter.com/o2PWFDLJHt

“Gymnastics rankings are the fairest of all collegiate sports because they’re totally mathematical.” Jim, I wish I had your optimism.

Lawson UB (Stanford): Some leg separation on the Maloney. Van Leeuwen better. Handstands could be a little crisper, double tuck dismount with a hop. 9.800.

Belkoff VT (ASU): Full, also pretty piked down and she stumbles in the landing. Didn’t seem to get a huge block. 9.550.

Yu UB (Stanford): A little over on the first handstand but the Maloney is nice. Handstand going into the dismount a bit short. Double tuck with her chest down and a small hop. Good one. 9.800.

Bryant UB (Stanford): Lovely lines. Tkatchev a little close but the Pak is just PERFECT. Some legs in the second flip of the DLO and a little hop on the landing. Her form though!! 9.900.

Brunette UB (Stanford): Deltchev! Close but a cool skill. Stumbled back out of the DLO but she had great form on it, just a little short. 9.675.

Flam UB (Stanford): Nice Jaeger. Slightly off on the handstands but definitely fighting for it. DLO full with a step forward. Needs some work to clean that up but what a cool dismount for Stanford to show. 9.800.

Landings weren’t quite there for ASU today. They’ll need those to compensate for lack of 10.0 starts. Stanford had to count a score in the 9.6’s on bars, but what a turnaround on the event for them. Wow!

BTW it was their first 49+ on the event all season long. Props!

Time to get our mojo back on bars! 😈 pic.twitter.com/bTsptIY8ey

Hart UB (ASU): Good height on the Jaeger to bail. DLO with legs pretty apart on the last flip and a small hop on the landing. She seems happy with it! 9.800.

Fitzgerald VT (Stanford): Full, not a ton of distance and lands a bit to the side. Relatively clean though. 9.750.

Callis UB (ASU): Oooooh some crazy legs on the Tkatchev. Toe shoot some better control. Legs apart on the DLO but sticks it. 9.800.

Am I the only one that feels Callis has some resemblance to Elena Eremina? Probably bc I usually am on comparisons but…

Okay, looks like Garcia isn’t vaulting and Kyla Bryant will be. So she’s back in the AA?

Bryant VT (Stanford): Full, yikes on that landing, her back leg goes up and has to put her hands down. Unfortunate that it didn’t pay off. 9.250.

Leonard-Baker UB (ASU): GORGEOUS handstands. Nice on the Maloney. Sticks the full-in…or really close to it. 9.925.

For those paying attention to the live stats, they’re not the most accurate with names…use at your own risk.

Well, these two teams seemed to switch places. Now Stanford had a rough landing rotation and ASU went the opposite with bars. What’s going to happen next?

We’re told Bryant is uncertain for floor. She’s in the anchor spot as of now but she may or may not go. Praying for your fantasy scores.

Here is our beam lineup! pic.twitter.com/HEecGKgeUz

Wilson BB (ASU): BHS LOSO nice. Slight check on the full turn. Switch half was sharp, front toss not so much and another check. Stuck dismount! 9.825.

Hoffman FX (Stanford): Didn’t catch the first pass but got a great reaction. Ring to Popa a little short. Double tuck chest slightly down. FHS to Rudi to stag, love that ending. 9.825.

Stanford called Cole’s routine a “gritty effort” on Twitter and all I can think of is Gritty the Flyers mascot. #PhillyPhilly

Gutierrez BB (ASU): In for Udowitch today. Bang on her series. RUFOLVA!! Really cool. Front walkover a bit off. Sticks the 1.5 dismount. Excellent! 9.850.

Flam FX (Stanford): Nice double arabian, redemptive after vault. Interesting music..it gets better after the beginning. Front full to front pike solid with a little step. Great straddle position on the leaps. Double pike, hard to see from the back but it looked solid as well. Nice comeback! 9.850.

Leonard-Baker BB (ASU): Straddle jump to LOSO with a check. Much tighter on the full turn. Beat jump to side leap. BHS LOSO with some legs on the BHS. 1.5 dismount with a controlled hop back. 9.675.

Lawson FX (Stanford): 1.5 to double back. Good landing! More interesting music but I like her choreo. Very confident it seems. Double pike piked down a little. 9.900. Dang girl!

Love that Tabitha is dancing too!

A. Szafranski BB (ASU): Side aerial looked a tiny bit off but she hits. Split leap to split jump. She moves so quickly on beam. Lovely full turn. Full-twisting swingdown and a great dismount. 9.775. Again…low??

Hoang FX (Stanford): Literally does not stop smiling. Huuggeee DLO with a slight step. Lovely leaps. FHS to front layout to front full. Nice. Double pike, definitely went into the first flip a little odd, thought she’d be fine but she sits it. Too bad after such a bomb start. 9.200.

Sam’s “welp” is everything.

Callis BB (ASU): One of my fave mounts. So precise. Triple series, takes it slow but good hit. Split jump to stag, so flexible. Very unique front series there. Side aerial to front full dismount, slightest of steps. Lovely way to end. 9.85.

Bryant FX (Stanford): Like that someone else is using this Kanye floor music, has anyone done it since Kat Grable from Arkansas? Full-in chest a little down but she WENT for it. Determined. Front tuck to double pike nice. Double tuck, so open and nails it. Clutch performance! I’m gagged.

Every pass looked like she was absolutely determined to stick it at all cost. Not that all gymnasts don’t want that, but she just really shows it. Waiting for her score.

Both teams had critical hits to replace low scores, though Stanford’s was a bit more detrimental. This is so close!

Cole BB (Stanford): Bent legs on her series and she’s off. Oof, lots of ground to make up already. Split leap to stag much better. Front aerial confident AF. Nice dismount. Sensed some anger beam there. 9.225.

The woman behind Jess Ginn is wearing lit up devil ears. Name a better mascot to emulate. Oooh, lots of fans repping them it looks like!

Stephenson BB (Stanford): I feel validated bc her hairstyle is one I actually wear on a regular basis. GORGEOUS front aerial. Nice leaps too. Gainer full almost a stick, very nice. 9.825.

Callis FX (ASU): Looks like a little music issue. Still smiles through it. Double pike pretty high but one foot goes out. 2.5 lovely. Beautiful illusion turn and position on the ring leap. 1.5 to front layout, close but hits it. So springy. More interesting music, lots of that tonight. 9.750.

Lawson BB (Stanford): Arabian lands close to the beam but stuck. So cool. Nice switch leap. Seems so calm and collected. Some windmill arms on the series but stays on. Gainer pike with a little step. Nice. 9.800.

Kuhm FX (ASU): Whip to double back, good landing. Lots of power on the back 1.5 and barely stays in. Great leap combo. OMG such cool piano music for the second half of the routine. FHS to front lay to stag…missed something in the middle there but very nice last pass. 9.875.

Navarro BB (Stanford): Another fab mount! Huge air on her series with just the slightest adjustment. Good front full. Front aerial, has to check and leg goes up a little but she stays on. Good save. Switch leap to straddle seemed more tentative. Oooh that was so close on the dismount, stepped back a bit but it’s good. 9.725.

Belkoff FX (ASU): Double pike, whooooh it’s powerful and she takes a few little steps back but stays in. FHS double full, much more controlled. So much height on the leaps. Great last pass too. Pretty routine minus the double pike. 9.850.

Fitzgerald BB (Stanford): Confidence on the front full. Front aerial with a littleeeee check. Switch leap to split jump, perfect. Choreo is very tight. Front aerial to back tuck, omg she’s off to the side and fighting but has to come off. Too bad for her. Sticks the dismount but that’s gonna be it for Stanford tonight. 9.175.

K. Szafranski FX (ASU): Missed that first pass but she looked good on it. Double tuck, nice landing. 1.5 to front lay, very good. Clutch routine that will absolutely tie it up for ASU. 9.925. Sets it up for a big one for Cairo.

Leonard-Baker FX (ASU): She can just have some fun here. Big double tuck. 1.5 to front full, good one. Loveee her dance. Why isn’t that viral? Last pass, double pike…perf! Didn’t need it but a great score for her. Very good. 9.95, kind of expected it after Szafranski.

So ASU rings a victory bell. Did not know this was a thing.