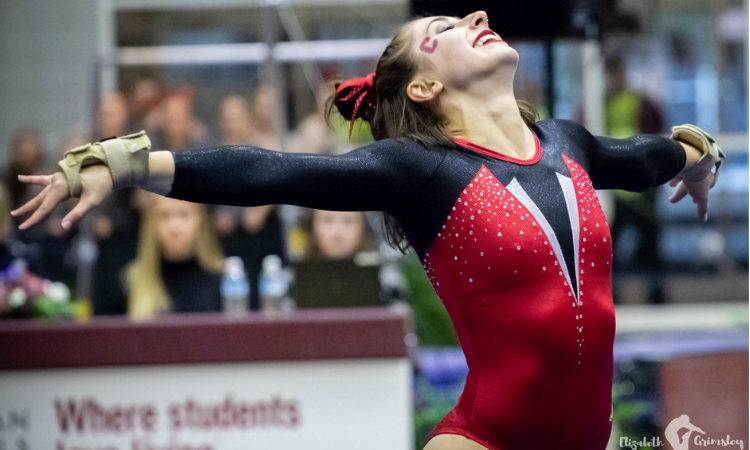 DIII teams Brockport and Ithaca are meeting up with Cornell for its Big Red Goes Pink Invitational—the team’s annual breast cancer awareness meet. All three of these teams are coming off a solid week five showing with Brockport scoring a season high, Ithaca putting up some big floor scores and Cornell finishing with a 191-plus for the third meet in a row. Though the Big Red are favored to win this meet, watch for Brockport to put the pressure on it as the Golden Eagles push to be the first NCGA team to break 190.000 this season.

Things are getting underway out in Ithaca. Gymnasts have marched in and Cornell is announcing its senior class as it’s both a breast cancer awareness and senior night meet.

Kurfirst (CU): Big Yurchenko tuck full… uncontrolled on the landing with a large step back

Mackey (CU): Yurchenko layout half with a controlled landing

Dudley (CU): Yuchenko layout full, great distance and height, just a bit too much power and hops back

Lee (IC): good series, bobble on full turn but dances out, fall on her beat jump + straddle 3/4 but finishes with a really nice RO 1 1/2 dismount STUCK!

Jackson (B): Shaposh to bail has some leg issues, massive double tuck to finish with a few steps back

Bustamente (IC): Side somi is solid, switch leg aerial is super cool and unique, front toss + bhs lovely, and a stuck piked gainer… that was a GREAT set!

Holcomb: Off on front mount, bhs loso is super solid and floaty, leaps were a bit shy of 180 but very controlled, bhs gainer full lands with her chest down a bit and has to step forward

Wead (B): Bail short of handstand a bit, nice free hip + toe shoot, some leg separation on the blind full + double but overall pretty good… think this one might have been an exhibition

After 1: …there are no live scores so I don’t know for sure where everyone is at.

Cornell looked great on vault! The only major issue I saw was some lack of control on landings. Otherwise, shapes in the air and chest height on landings looked really good. We didn’t get to see much of Brockport on bars, but Doll and Jackson had nice sets with big releases. From what we were able to see of Ithaca on beam, the Bombers looked to have had a solid rotation with some really unique skills.

Kurfirst (CU): Blind to Jaeger is a bit low but caught, nice bail to HS, blind full + double with a small step back. Good lead-off.

Patient (CU): Massive tkatchev but hits feet on the floor out of her pak, finishes strong with a pirouette to double with a small step

Webster (CU): Clean blind to bail HS but takes an extra glide before the kip?? looked okay from this angle but must have caught a bit wonky, finishes strong with a nice dismount

Luniewicz (CU): Blind full + Gienger with a lot of leg separation but rest of set is really clean and a good comeback after Webster

Mager (B): slight check on backtuck, bhs back pike is nice

Gery (IC): Front through to huge double tuck! manages to stay in bounds but toes the line a bit, cute she’s getting the crowd to clap with her… ends with a great double pike! That was really fun.

Kowalik (B): Front aerial + beat jump a bit slow on the connection, works to save the BHS LOSO and stays on, stuck gainer full… not quite the usual solid set we see from her but still very nice

After 2: Again, haven’t seen many scores besides what Cornell has posted on Twitter

The stream was a bit crazy during this last rotation as they were jumping back and forth during sets… so I apologize for half-completed routines! Anyways, we still haven’t seen much from Brockport, so I’m not sure where it’s at right now. However, we’ve seen quite a bit from Ithaca and it looks like its having a great meet! Super solid on both beam and floor. Cornell wasn’t able to live up to the vault rotation earlier and ended up having to count a 9.300 but still had some shining moments.

Murphy (CU): BHS LOSO with a slight check but WOW her lines are really pretty, a bit hesitant on the hitchkick + side somi, finishes with a stuck front full.

Patient (CU): BHS + front toss to a sitting position is off from the get-go and she ends up sliding off, bobble on the side aerial, nice jumps, gainer pike with a small hop… just a bit tentative throughout

Mackey (CU): Cat leap + switch side is big and confident, standing loso to knee + side aerial…awesome! Another great jump connection and a stuck gainer pike. I LOVE these sets! Such unique skills

Dudley (CU): Super solid bhs loso, straddle 1/2 + beat jump is nice as well as her side aerial, RO 1 1/2 is good… good comeback routine after a fall from Lund

Green (CU): Handstand mount is lovely, front aerial + bhs is great and super aggressive, cat + aerial + back full stuck! I really liked how aggressive she was throughout. Really attacked everything which is something we didn’t see from the previous routines

Kowalik (B): I missed her first pass but great leaps, RO + whip half + front full is a bit out of control but stays in bounds, BEAUTIFUL rudi + split jump to close

After 3: Wouldn’t it be nice if I could tell you scores?!

Fortunately, we got to see some more from Brockport this rotation and the Golden Eagles looked fantastic on their best event—floor. Cornell ended up having to count a fall on beam and looked pretty hesitant throughout. However, I loved the unique combinations from Patient and Mackey and will definitely be following them a bit more closely in the coming weeks.

Chall (CU): Super controlled RO 2 1/2! One of the best ones I’ve ever seen! Crazy legs on the front lay + front full, a bit scary on her rudi… landed short and bounced forward out

Holcomb (IC): Nice toe-on to pak, a little too aggressive on the half pirouette to toe-shoot but sticks the toe-front!

Webster (CU): Open double pike for her first pass is great. Double tuck lands with her chest down just a hair. Not quite full split on the Strug + wolf full combo. RO + 1 1/2 is almost stuck but ends up taking a controlled step back

Herczeg (CU): BIG double tuck and opens it up at the end! RO 1 1/2 + layout is too powerful and bounces out. Love this set, it looks like she’s having so much fun! Finishes with a nice rudi.

Haklik (CU): RO 1 1/2 step out through double tuck is great! What a difficult pass! Doesn’t get her wolf full around but… close enough?! ha. Front lay + front full is really clean as well.

Henry (CU): Really powerful double pike and bounces back out of it, front lay + front full + front half + double stag is interesting…unique pass but the front half was a bit low, closes with a stuck double tuck

Welp, we didn’t get to see a ton from Brockport and Ithaca here, but Cornell had a great meet aside from some mishaps on bars and beam. Looks like our DIII teams also performed well as both hit season-highs today!

READ THIS NEXT: The DIIISMOUNT Week 5