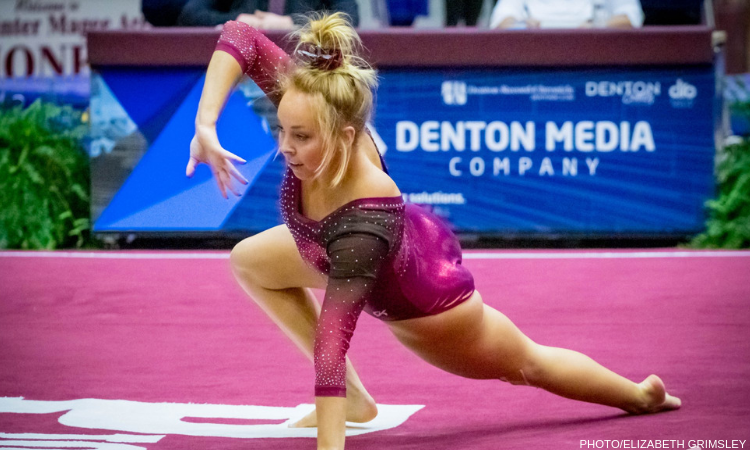 Week five is complete, and there are some clear leaders that are starting to pull away from the pack. UW-Stout and UW-La Crosse sit atop the WIAC while Brockport, Ithaca and Springfield have distanced themselves from the rest of the NCGA-East. However, that’s not to say big things aren’t happening with the lower ranked teams. This week, we saw Gustavus score a season-high, Ursinus bounce back after a tough outing in week four and Rhode Island College score season highs on vault and beam.

For the second week in a row, freshman Britney Wolfe broke a 9.700 on beam. She competes a floaty back handspring layout, and her routine is capped off with a solid side aerial + back full dismount.

Clemens broke the school record this weekend after scoring a 9.800 for her high-flying Gienger and stuck dismount.

Best Moment of the Week

This weekend, Brockport honored volunteer coach and former gymnast Shelby Schumaker. Schumaker retired early due to a recent Lupus diagnosis. The team surprised her by dedicating its performance to her.

the best kind of people are the ones that come into your life, and make you see the sun where you once saw clouds. the once in a lifetime kind of people. my heart is so full—thank you to these two for being my best jimmies ever

The Big Storyline: Springfield had its best meet of the season with a few gymnasts scoring season highs and two scoring personal bests—Jess Clemens with a 9.800 on bars and Lena Morant with a 9.500 on the same event. Week after week, the Pride has been steadily improving and continues to solidify its spot in the top three teams in the NCGA-East.

Implications: With a three-point lead over Cortland, Springfield is becoming a top team in the conference this year and proving it can make a push for the NCGA-East title.

Records: Clemens broke the school record on bars with a 9.800.

The Big Storyline: Beam falls and tight scoring on vault and floor led to some uncharacteristic team scores from Air Force and Whitewater. All three teams ended up counting at least two falls on beam, which was especially disappointing for an Air Force team that has been solid all season and ranked in the top 20 on the event the past few weeks. As for the two DIII teams here, we expected this to be a bit closer between them than it was with UW-W continuing to struggle with putting up full lineups with full difficulty.

The Big Storyline: Ursinus had a much better finish than it did last week when it was unable to field a lineup of five on bars after an injury in the first rotation. The Bears nearly matched their season high, thanks to standout performances from Lindsay Rush on vault, and Emma Brown, who scored a team-high of 9.600 on floor. Though plagued with some injuries, Ursinus continues to make the best of its situation and showed resilience in its comeback after an unfortunate finish in week four.

Implications: Ursinus will stay in the No. 5 spot in the NCGA-East.

The Big Storyline: Brockport hit a fantastic meet and managed to sweep all the individual titles in this closely-ranked competition with Ithaca. However, both teams did well and had a lot of success. In fact, 13 of the top 20 DIII scores this weekend belonged to gymnasts from Brockport and Ithaca. Rhode Island continued to struggle on bars but put up a solid meet otherwise, scoring a season high on vault and beam.

Implications: Brockport continues to distance itself from Ithaca and Springfield and is proving it is the team to beat in the conference.

The Big Storyline: Though the Blue Devils had their lowest total of season so far, they continued their winning streak over WIAC competitors, coming out ahead with the team’s largest margin of victory this season. In addition to a team victory, Stout swept all the individual titles. Mikala Bugge was the star of the night claiming the vault, floor and all around titles for the Blue Devils. The Blugolds had two top three finishes from Ashley Benes on vault and Kiya Bjorge on floor. Katie Kalland was the Piper’s top performer, finishing second on beam with a 9.600.

Implications: Stout will remain the top DIII team this week, but Brockport is closing in quickly—trailing the Blue Devils by only 0.423.

The Big Storyline: Like Stout, UW-Oshkosh dominated its meet, besting Winona by nearly two points and sweeping all the individual titles. Titan freshman Emily Gilot was a key contributor and collected four titles for herself while Bailee Hardy claimed the fifth. The Warriors had four top three finishes from Kaitlyn West on vault, Shelsea Zehr on bars and Sunny Hasebe and Natalie Koehler on beam.

Implications: Winona pulled ahead of UW-Eau Claire in the standings.

The Big Storyline: After missing their first meet of the weekend due to weather, the Gusties brought the heat on Sunday and scored a season high with some big scores all around. Amanda Malo recorded the team’s highest score on vault and floor while Sam Ardy was best on bars. Malo’s score of 9.675 on floor is the Gustie’s first score to make our top scores chart this season.

Implications: This score wasn’t enough to move Gustavus up in the rankings this week, but it is only trailing UW-EC by 0.200.