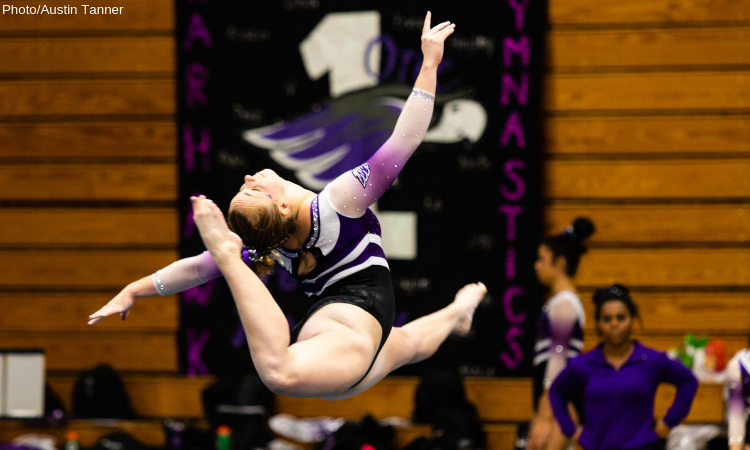 There was a ton of action this weekend. Many of our DIII teams got to show their stuff against DI and DII competitors at quad meets and tris around the country, and there were top 10 finishes galore! Some highlights include Stout proving that last week’s huge home opener wasn’t a fluke, Cortland taking three individual titles against Cornell and Brockport showing it is able to hit the big floor rotation it’s become known for the past few seasons.

In a low scoring meet overall, Jarvis managed to grab everyone’s attention with her big tumbling and fun routine to score a personal best and meet-high of 9.625.

After competing only one or two events in the first few meets of the season, Rodriguez made her all around debut this weekend. She managed to take second and help lead her team to a season-high score.

Tonjes strikes again! We see gymnasts wear bows in their hair all the time, but have you ever seen one like this?

The Big Storyline: The Pipers showed they shouldn’t be counted out when it comes to making a return appearance at nationals. The team hit a great meet to set a new season high and an eight-point score increase over last week. Meghan Webb continues to be a big contributor, scoring a huge 9.750 on beam and a 9.675 on floor.

Implications: Hamline will sit just a few tenths below UW-Whitewater and put some pressure on the Warhawks to make improvements if they want to remain No. 3 in the conference.

The Big Storyline: Ithaca wasn’t quite able to maintain the performance level we saw in its season opener, but it put enough together to stay ahead of Ursinus. Ursinus had a critical team member go down in the first event of the day and wasn’t able to field an entire lineup on bars. Besides that, the Bears had a pretty good meet with seven gymnasts setting season-high scores.

Implications: Lack of a fifth competitor on bars will cause Ursinus to fall below Gustavus in the NCGA rankings. Ithaca will also experience a slight dip, falling behind NCGA East foe Brockport.

The Big Storyline: Springfield scored a season-high this weekend and continues to inch closer to Ithaca in the rankings. Jess Clemens was a standout, hitting all of her sets to score a big 37.700 in the all around and Tali Twomey led the way on floor with the Pride’s meet-high score of 9.625.

Implications: Springfield solidified itself as the third best team in the NCGA East averaging two full points higher than Cortland, which is currently fourth.

The Big Storyline: Stout proved once again that it’s on a mission this year, taking down reigning WIAC champion UW-La Crosse by nearly two points and scoring a school-record team total in the process. The Blue Devils also set records on both bars and beam. Shadae Boone was a big scorer, placing in the top eight on both vault and floor, and Mikala Bugge took third in the all around with a fantastic 38.100. UW-La Crosse had some problems on bars in the first rotation, which ultimately took it out of the mix for second place. However, the Eagles bounced back strong and have nine top 10 finishes to be proud of.

Implications: UW-Stout will stay atop the NCGA rankings this week. UW-La Crosse continues to climb a little higher, pulling ahead of UW-Whitewater.

Controversies: A long judging conference after a floor routine from a UW-Stout gymnast caused a bit of a delay in the competition.

The Big Storyline: We finally saw Brockport hit its usual floor rotation, counting no scores below a 9.600 and besting DII competitor SCSU. The massive 48.475 on floor helped the Golden Eagles to a season-high team score and one we would typically expect to see at this point in the season from a team of its caliber. This was RIC’s second meet of the weekend in which it showed a bit of improvement.

Implications: Brockport will move up to No. 2 in the division, moving ahead of Ithaca to take the top spot in the NCGA East.

The Big Storyline: Cortland was able to score a season-high this weekend and take three individual titles against DI Cornell. Rachel Filipski won vault, and Emma Schulz tied for the beam title and won the all around in only her second meet competing every event. She was joined on the podium by teammates Kamryn Rodriguez and Megan Hanley. This was Rodriguez’s first time competing all around. Cortland is still only able to put out five competitors on bars and beam but is continuing to make the improvements necessary to stay above conference competitors Ursinus and Rhode Island.

Implications: Cortland will stay at at No. 4 in the NCGA East but have made it clear it won’t dip to No. 5 or No. 6 anytime soon.

The Big Storyline: Though we weren’t able to watch this meet, something tells us scoring was a bit harsh on vault and bars. Eau Claire nabbed two individual titles with Andrea Gessner and Lauralynn Anderson scoring top marks on vault while Hannah Lewis managed to top the competition on bars. The Titans managed to receive some higher scores on beam and floor.

Implications: Both of these teams will fall in the rankings this week.

The Big Storyline: This was a bit of a surprising meet for multiple reasons. The first is an uncharacteristic score from top-player UW-Whitewater. Though Franchesca Hutton and Abby Helmke are steady contributors the Warhawks can count on to bring in some big scores, they are struggling to get that consistency out of their other contributors. UW-W was also only able to field a team of five on bars this week and ended up having to count multiple falls there. Winona’s finish was a bit surprising as well. The Warriors were able to hold their own against the reigning national champs, coming in a mere 0.725 behind and making the distance between them and the Warhawks smaller than the distance between them and the Gusties who had managed to overtake the Warriors just days earlier.

Implications: UW-W will fall to No. 3 in the conference, just barely ahead of Hamline. Winona also drops in the rankings but manages to stay ahead of Gustavus even after a loss to the Gusties earlier in the week.