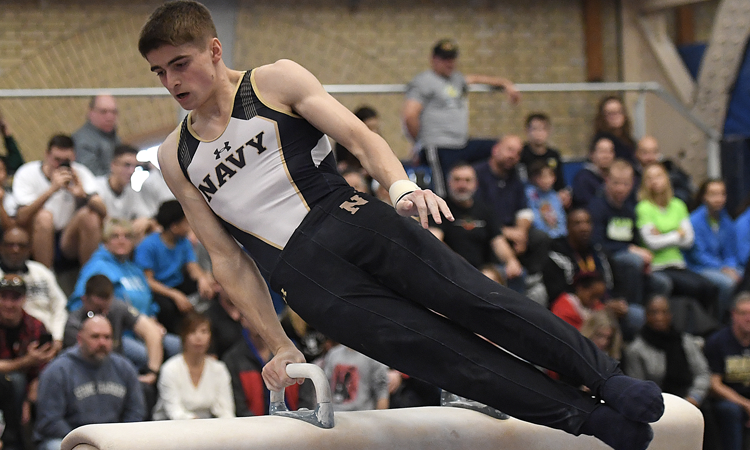 The first full weekend of dual meets brought us a bunch of high scores and a ton of dominant individual performances. Oklahoma continued to assert its dominance on the rest of the schools while the Big Ten’s regular season standings began to take shape, with a few upsets as well.

Honestly, it was only a matter of time before he claimed this honor. The only question was which event it would happen on first.

Cole Casanova (Army) – All Around

In a weekend where world championship competitors won multiple event titles at their meets, nobody won more titles than Cole Casanova did on the road at Springfield. Casanova was a part of the winning team, set a new career high while winning the all around and won or tied for the win on five of the six events. To top it off, he also set new career highs on three events—no big deal. This is Army’s second gymnast to be featured here this year, so keep your eye on it in the weeks to come.

Emyre Cole with a HUGE 14.85, Anthony McCallum with a 14.75!#GoBlue pic.twitter.com/EkYgGZSdL6

What a massive vault! The difficulty for this Tsuk double pike is insane and so is Cole’s ability to do it. This one has a bit of trouble on the landing, but teams better watch out when he finally gets that stick.

The Big Storyline: The Cardinal freshmen proved once again that Stanford is a major player this year, propelling Stanford to its third straight win over California this season with a new high score as well. Freshman Brody Malone earned a win on high bar and freshman Ian Gunther posted the top marks on pommel horse and still rings as Stanford swept all the titles. Troubles on pommel horse and parallel bars dismounts plagued California as they just missed matching its season best score.

Records: Malone’s 84.550 is the highest all around score recorded by a freshman this season, and the second highest of any athlete this season.

The Big Storyline: A huge high bar rotation helped propel Penn State to victory over visiting conference foe Nebraska while setting a new season best score in the process. The Nittany Lions won five of the six event titles up for grabs with star Sam Zakutney winning three of the four events he competed. Nebraska’s Anton Stephenson nabbed the Huskers’ only event title of the night, using his stellar yurchenko two and a half to win the title on vault.

Records: Stephenson’s vault score of 14.950 is the highest number recorded on the event by any team so far this season.

The Big Storyline: After trailing heading into the final rotation, Michigan rocked its vault rotation to best its season debut score by over 10 points and take down Minnesota on the road. On his way to winning the all around, Cameron Bock also won half of the event titles to help the Wolverines take all but one win in Minneapolis. Justin Karstadt won pommel horse for Minnesota’s lone win of the weekend, but the Golden Gophers still had a good showing and posted their season high score as well.

Implications: In the Big Ten regular season standings, Michigan is now 1-0 and Minnesota 0-1.

Records: Bock’s score in the all around is currently the top all around mark in the country this season.

The Big Storyline: Levi Anderson’s score counted on every event aside from rings as he led the top-ranked Sooners to victory over the visiting Buckeyes. World medalist Yul Moldauer returned for Oklahoma on four events, winning two and posting the top score in the country on parallel bars. Moldauer’s world championship teammate Alec Yoder won his signature event, pommel horse, to lead Ohio State. Despite Yoder’s routine, the Buckeyes struggled on the event as well as high bar, posting a total a few points lower than their opening one a few weeks ago.

Implications: Ohio State will likely fall a few places in the rankings after not reaching the 400-point barrier so far this year while Oklahoma will easily maintain its top ranking.

The Big Storyline: In front of a home crowd, William & Mary was able to post a season high score, but it wasn’t enough to stop a Navy team off to a hot start to its year. The Midshipmen’s depth came into play as they were able to overcome the Tribe’s four event title winners, led by freshman double winner Andrew Lyubovsky. Navy was unable to hit the 400 mark as it did last week due to some struggles on parallel bars and high bar, but leaders Ben Provost and Frank Bradley stepped up on their important events.

Implications: Navy may drop out of the top 10 with other schools posting higher scores than it did while William & Mary will likely remain ranked near its current 15th spot.

Records: Navy’s 68.250 pommel horse rotation was three points better than its previous best and is one of the top 10 totals recorded on the event by any team this season.

The Big Storyline: Illinois ran away with this one early, leading from start to finish in a meet that, however, saw both teams record season highs. The Illini set new season highs on every event, despite a high bar rotation that saw multiple falls. The anchors on each lineup came up big for Illinois, with Alex Diab, Johnny Jacobson, Michael Paradise and Ross Thompson winning each of the events they anchored. Iowa struggled on high bar, arguably its best event, but performed well on the other five to best its season high score by over four points. Vault was the Hawkeyes’ best rotation of the night, with Andrew Herrador and Bennet Huang tying for Iowa’s lone title of the meet.

Records: Alex Diab won his 23rd event title on rings, tying the record for the most in Illinois history.

The Big Storyline: Cole Casanova used a dominant performance to win every event aside from pommel horse as he propelled Army to a win over Springfield. Stephen Lewis of Springfield was the only gymnast other than Casanova to win an event, posting the top score on pommel horse and tying for the win on parallel bars. Springfield bested its previous high score of the year by 10 points while Army improved by four.

Implications: Despite posting team high scores, both teams will likely stay ranked around the same position next week.

Records: Army’s 69.650 on floor marked a new school record on the event while Casanova and Lewis both posted career highs in the all around.