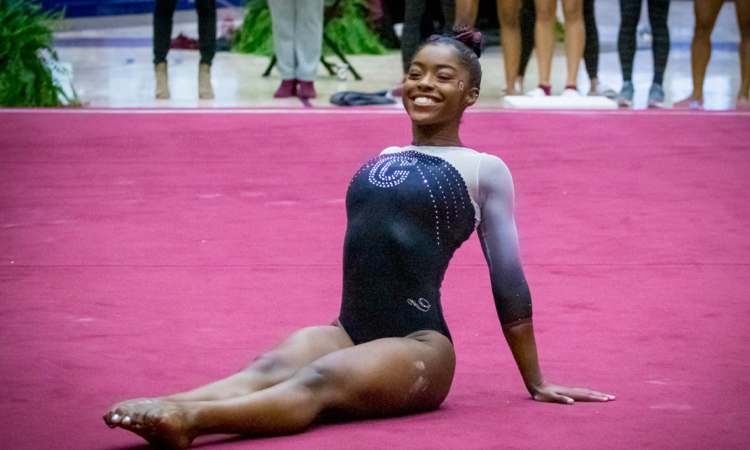 The USAG season is starting to ramp up this week, with two more 195-plus scores in the books as well as the longest list of 9.850-plus individual scores we’ve seen so far this season. Bridgeport had a breakout meet, Yale and UIC kept cruising at the top and Air Force is looking like a serious threat. There were some great individual performances throughout Division II, and the perennial Lindenwood/Texas Woman’s rivalry was as interesting as ever with the two registering exactly the same score at the same time but in two different meets.

We wanted to show more love to the non-top teams in college gym in 2019, so we broke out our Dismounts into DI, DII (all USAG nationals teams) and DIII. Each week, we’re also dishing out a few superlatives for some of our favorite moments, looks and results from the weekend of competition. Below those, you’ll find your typical results and highlights from every DII and USAG nationals-eligible team’s meet. For reference, teams eligible for USAG nationals include those with less than seven and a half full scholarships. They include, Ivy league schools, all DII teams, Air Force, Centenary and SEMO.

Alicke, a former German elite, has always excelled on bars for the Flames, and this week she tied the top bars score of the USAG season. Her routine is difficult and unique, featuring a Ray and a double full dismount.

Bridgeport’s freshmen have started the year strong, but Gwinn (hilariously called “Cookie” by her team) made the biggest splash this weekend with season highs on both of her events: a 9.850 on vault and a 9.875 on floor. In J.O. Gwinn was massively powerful but occasionally struggled to control her landings. If she has them figured out so soon in her college career, she’ll be a massive weapon for the Purple Knights.

Under the Radar Team

The Bulldogs’ excellence this year has been overshadowed by UIC’s immediate dominance in USAG, but they have been ranked No. 2 since the very first week they competed. The success is quite a jump from last year, where they were ranked No. 5 at the end of January, and especially 2017 when they sat at No. 9 at this point. Even more impressively, Yale’s excellent freshmen are restricted by injury, so it’s accomplishing this with only one routine from a newcomer.

The Big Storyline: UIC put up yet another season-best mark; the Flames continue to improve week by week. The Flames recovered from mistakes on beam early in the meet and withstood a late charge by Northern Illinois by excelling on bars in the final rotation.

Implications: UIC will remain atop the MIC and USAG.

The Big Storyline: Lindenwood had a strong showing at Iowa State that included season highs on vault and floor. Junior Ryan Henry had a great day, with season highs on two events and in the all around while sophomore Aleah Turon returned from her 2018 ACL injury to become one of the team’s most valuable vaulters.

Implications: The Lions won’t see any major ranking changes this week, but they’re creeping closer to No. 2 Yale in the USAG rankings.

The Big Storyline: Yale is still cruising in 2019 despite injury restrictions to its freshman class. It couldn’t pull off the upset versus New Hampshire, but it was able to register one of the highest scores of the USAG season with the help of a very clean floor rotation.

Records: Alyssa Firth set a career high on floor that was also good for the individual title.

The Big Storyline: Bridgeport cruised to a season high by over a point on the road at Brown which was also the second highest team score of the USAG season. Senior Maya Reimers and sophomore Kathryn Doran picked up individual titles on their best events while freshmen Crystal Gwinn and Julianna Roland continued to prove their worth to the team with great performances.

Implications: UB will jump a few spots in the national rankings, but it will stay put in USAG.

The Big Storyline: Seattle Pacific had a spectacular first half, putting up great floor and vault rotations before having a disaster on bars that left it in fourth place. Air Force cruised to an expected but still impressive victory, putting an exclamation point on its new place near the top of the MPSF.

Implications: Seattle Pacific will drop a few ranking positions and will be passed by Alaska in MPSF standings. Air Force will hold steady in conference and MPSF standings.

Records: SPU’s Jadacie Durst and Itzia San Roman set new career highs on floor. Air Force got a collection of career highs as well, including from Tyler Davis and Anna Salamone on vault and Mariana Murphy on bars.

The Big Storyline: Penn struggled on bars and couldn’t recover, but it kept the pace up to squeak over 190. The Quakers will return home for the entire month of February and will look to bounce back.

Implications: Penn will drop a few ranking spots but will stay in USAG nationals qualifying position in No. 8.

Controversies: Scoring was tight throughout this meet, but a video of freshman Ava Caravela scoring a 9.275 for a very solid Yurchenko full was the most extreme case and is circulating as an example of judging inconsistency.

The Big Storyline: Texas Woman’s continued to explore its depth and Morgan Colee was back on vault and bars, helping the Pioneers take the win in this DIII-opponent quad meet. The total score was the team’s highest of the season by almost a point, primarily thanks to eliminating most of the major mistakes on beam and floor. While it still had to count a fall on beam—Hunter Vincent attempted a back handspring layout step-out layout step-out—it cleaned up floor, an event that had been causing it trouble to start the season. Centenary also had a fantastic showing, posting a season high by almost two points and besting the two other DIII teams at the competition, thanks to an impressive 48.275 on beam.

Implications: Because of some lower scores to start the season, TWU still sits rather low in the USAG rankings, especially as the two-time defending national champion. However, it is on the right track. If it can clean up vault and eliminate major beam mistakes, it will be right up in the 195s alongside its other MIC and USAG counterparts. For Centenary, it sits at an impressive No. 69 in the country after week four.

Controversies: There were so. many. judging conferences after beam and floor routines in particular. Whether the judges were out of practice with DIII routines and the fact that they sometimes score lower or don’t start from a 10.0 or the two paired up on the events happened to be in disagreement over more things than not, we don’t know. But it definitely slowed the meet down.

The Big Storyline: Cornell led throughout the meet to defeat Cortland at home. The Big Red excelled on bars where it put up three routines over 9.800 and on beam where it put together the best single event of the meet. The final score was a season high for the second week in a row.

Implications: Cornell won’t see a major change in its ranking this week. Next week it faces off against Penn, which should be fascinating since the two have been ranked closely all season.

The Big Storyline: The Redhawks continued to struggle, particularly on bars, but freshman Anna Kaziska was once again a revelation. We’ve heard that this squad has had some injuries in practice recently, and at this meet only eight gymnasts competed.

Implications: SEMO’s ranking will drop another few places this week, and it now sits behind DIII team and conference-mate Centenary.

The Big Storyline: Southern Connecticut freshman Hannah Stahlbrodt soared at this meet to break the program record in the all around in only her third meet as an Owl, as well as picked up two individual titles. Sophomore transfer Jordan Peloquin also had a fantastic day. The Owls set a season high and the performances of their newcomers should make them very excited for the future.

Implications: The Owls won’t see any major changes in their rankings this week.

The Big Storyline: West Chester swept Springfield on the road, closing with a great beam rotation that was good for 48.450.

Implications: The Golden Rams will trade places with Southern Connecticut in the USAG rankings, jumping to No. 10. The two are often very close in ranking and could end up fighting for the same qualifying spot to USAG nationals.