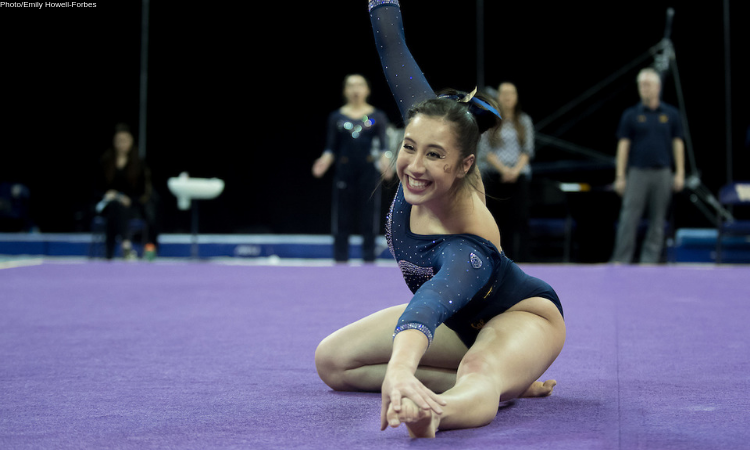 This is my third straight week live blogging Cal, so I won’t bore you with exactly the same intro blurb I wrote the last two times. Short version, I think Cal needs to get more underclassmen into its lineup if it wants to keep pace as the season goes on. Cal disagrees, and it’s a source of some friction between us. On the bright side, sophomore Nina Schank made her floor debut last week with one of my very favorite routines that I thought would be lost forever after she never got to compete it last year. Here’s hoping she gets to keep that spot.

It’s been smooth sailing for the Wildcats so far this season: They set a season high at home last week, and with Christina Berg and Maddi Leydin shining, they’re not hurting for Payton Bellows. That said, it would really be nice if she could get back in a lineup or two or if we could at least figure out exactly what her deal is.

JaNay Honest is on the floor of this meet and unfortunately she can’t pronounce Kyana but neither can dude. It’s like Diana not like Kiana guys. Pretty sure you have a copy of the media guide.

Really happy to see Schank hanging onto her lineup spot on floor! Not so happy to see no Solari and no Bordas.

John Court wants to emphasize that his team is still rebuilding.

Both teams are in new leotards today! Here’s Arizona’s. I’ll get a pic of Cal when I can.

PARKS – UA: Twisting onto the table on her Yurchenko full, hop into salute but pretty solid start.

JONES – CAL: Maloney to Pak, bit of feet, over on a handstand on the high bar, couple of empty swings, full in dismount with her chest down and a hop.

LEYDIN – UA: Really nice full, noticeably better body position than the first one with a smallish hop back.

GEORGE – CAL: “This smile tells the story of what a gifted athlete she is.”

Tkachev, didn’t quite get her hands over and falls, just walks out. Gets through the rest clean, stick on her ftdb dismount.

LEUNG – UA: Blocks way over to one side on the table and vault keeps moving sideways, piked but a good landing.

SHU – CAL: Ray, way off on her overshoot, lands right on top of the bar and can’t kip out of it, puts her feet down. Awful start from Cal.

BORDAS – CAL: Blind to Jaeger, falls, overshoot, misses a handstand on high bar, blind full double back. This is hard to watch.

SWANSON – UA: Best full of the bunch so far. Really clean on the table, beautiful floor.

WATTERSON – CAL: Pak, toe on to van Leeuwen, getting through it. Toe full double back deep, hops to salute. FINALLY a hit.

Yeah. Poor Cal. Arizona’s start was nothing special but it mostly did its job and that should be all it really needs.

Looks like new coach Janelle McDonald is on the floor coaching bars for the Bears. It’s only fair that she gets to go through what Justin and Liz did last January. Nice of the girls to give her such a great professional development opportunity.

Also interested that Bordas went when she did, this isn’t the first time that Kuc has been pulled in difficult circumstances.

HENDRICKSON – UA: Blind to Jaeger, a bit close, ooh the catch was super hairy but she worked through it. Great double lay with a hop back.

JONES – CAL: Big full! Form isn’t perfect and she had a hop back but by far the most amplitude today.

MASTRANGELO – CAL: Fairly soft onto the table but still a big vault with a hop back. She’s been working one and a halfs. If this were UCLA she’d have thrown it there just because there’s nothing to lose now.

SWANSON – UA: Full turn to Tkachev, oooh bent her legs on the Pak, switch kip, double lay, bends her legs a bit to get past the bar and a hop.

CLAUSI – CAL: Split legs onto the table, one and a half with a tiny bounce but her toes stayed down. Willing to call that a stick. Yay!

LEYDIN – UA: Toe on to Pak, bit of leg sep, nice Markelov! Really big, one of the best I’ve seen her do. Blind full to double back stuck. Great!

“She’s definitely proving that she is a fifth year senior.” LOL JANAY.

GEORGE – CAL: Full, stuck dead. Amazing second half of the rotation for Cal. Super clean on the block in slowmo… and the mat moved under her and she still didn’t move.

BERG – UA: Blind to pike Jaeger to overshoot, bit of leg sep in the middle, full twisting double back up on her toes but more or less holds the landing. Dude squad in the audience chanting CHRIS-SY CHRIS-SY.

That was a pretty clean rotation. Arizona’s top half is fairly yikes on bars, while Cal was great on vault (49.3!) but it has a lot of ground to make up clearly. This will be a RQS drop score regardless of what the Bears do from here.

Arizona has this athletic tape that’s nude with a black tattoo pattern and it’s really unique. From a distance it can look like some awful skin complaint, especially for the one girl (Cowles? I think) who usually covers her back with it.

SO. SEILNACHT – CAL: Rudi double stag, kinda close to the line but solid. One and a half Barani split, great, one and a half punch lay. Nice secure start.

LEUNG – UA: BHS LOSO bit of an adjustment on her front foot but good. Full turn, switch switch way short of split. Hitch kick side aerial, one and a half twist with two quick steps. Good hit to get back on track.

One and a half front lay, I think that’s her second pass, I’m always missing her first somehow. Two and a half nice and secure to finish. In replay the first is a double pike and she had a bit of abounce out of it.

DAVIS – UA: Triple series, right up to the end of the beam but super secure. Split to straddle 1/4, uncertain landing but no actual problems, hitch kick kickover front a bit deep. Full turn is nice, one and a half with a hop to the side.

GEORGE – CAL: Double back to open, overpowered, has to take a really big lunge. Front double full is fantastic, one and a half front lay I think. Cal is building back.

Well the dude commentator has found a different wrong way to say Kyana.

FREIDIN – UA: She’s fun to watch, a great dancer as well as gymnast. Flic loso with questionable form, switch to beat, side aerial with an adjustment. Her gainer pike is gorgeous, airy with her arms out to the side, step back.

SCHANK – CAL: Double pike, hop back and an OOB, front lay front full great. She looks like she’s having so much fun. Switch side wolf full, Rudi a bit messy in the air and lands staggered but hops to lunge fine.

COWLES – UA: Cat leap front aerial to beat, looked like she was going over to one side but she worked it through fine. Full turn, she’s so stylish on beam, her upper body work is fabulous. BHS LOSO with a touch of feet, switch split a touch short.

CLAUSI – CAL: JaNay says “Starting her routine off on her head… and now she’s gotta tumble? Imagine that.” Love her. Full in is great, looks like she’s trying to stick it for a second, switch side wolf full. Front double full and steps quickly out of it but makes it work in her dance. Great routine.

Looks like Bordas in for Williams in the anchor.

BORDAS – CAL: Really hoping for a good hit here. Her dance is phenomenal. Double pike, almost stuck, goes for a baby lunge. Dance is NEXT LEVEL. Switch ring switch half, great. Performance quality through the roof, she’s playing to the cameras. Rudi with legs crossed a touch but mega controlled landing. One and a half front lay.

Cal got screwed a little on floor scores there. Not that it matters that much, but I still feel a little bad. Arizona is putting together a really nice meet here.

CLAUSI – CAL: Beautiful choreo, switch switch, bhs loso with feet and a bit of a check. Full turn, beat side aerial back full with a hop.

SWANSON – UA: Front thru two and a half!! Really good landing. Double back with a bit of cowboying, double full punch front.

KEELEN – CAL: BHS LOSO, great, super aggressive. Front aerial, I lost the end of that sorry but I think it was good.

COWLES – UA: Front lay front full, bit low, solid landing. Switch ring tour jete 1/2, two and a half twist… oh yikes. Comes in deep and forward rolls out of it, step out of bounds. That’ll have to be a fall. Big Yao Jinnan mood.

WILLIAMS – CAL: Punch front LOSO is great, switch short of splits to switch side. Her switch technique is odd, I’m not totally sure that should be credited vs a straddle 1/4. Gainer pike stuck.

LEYDIN – UA: Front thru double back, a little under, step forward into lunge. Switch side split full, tour jete 1/2 to Popa, the team just calls her Aussie and idk how I feel about that honestly, double pike with a scoot back.

WATTERSON – CAL: Glad she’s finally getting her shot, BHS LOSO, ugh bends sideways and falls. Oh my god… She went for a side aerial back full, missed the second foot and just dropped off the beam, saluted and walked away. That won’t be a hot score.

Cal managed to drag a halfway respectable score out of that but… ugh. Arizona is really starting to get its head together this season, though. We’ll see how it goes when they’re back on the road but this is promising.