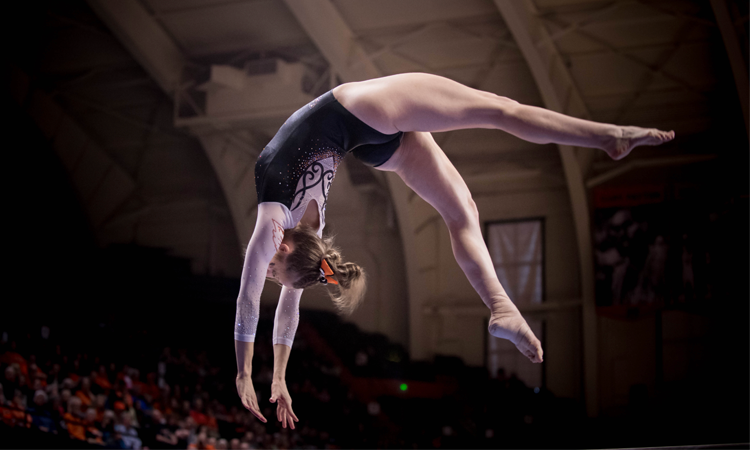 As we head into week four, teams are shaping into the teams they’ll eventually be when we reach the end of the season. There are some key matchups this weekend to keep an eye on, and you can find out about them below.

Why You Should Cancel Plans For It: Auburn has won all three meets it’s competed in this season; not a small accomplishment considering one of those wins was against LSU. That makes the Tigers’ matchup with Georgia all the more exciting since the fellow SEC squad is just coming off a season-high score of its own. This year more than ever has seen SEC matchups become more and more legitimate contests, and this meet should be no exception. It will also feature some of the country’s most exciting freshmen in Auburn’s Derrian Gobourne and Georgia’s Rachael Lukacs. Expect them to vie for titles on vault and floor, specialties for of them.

What Else You Should Know Before Tuning In: Georgia freshman Megan Roberts is finally back from injury, making her debut in the bar lineup versus Alabama last week.

Why You Should Cancel Plans For It: Given how both teams’ seasons have been going thus far, neither outcome would be particularly surprising in this meet. Either way, it will surely be fun to watch. Expect another down-to-the-wire finish like they each had last week too. The event we’ll be watching for both teams is beam: LSU hasn’t had the best go of it this season, and we’ve all seen how judging has been on that event in Tuscaloosa. As for wishful thinking, it would also be exciting to see performances from each team’s midyear freshmen (LSU’s Bailey Ferrer and Alabama’s Sania Mitchell), but don’t bet on seeing both of them either.

What Else You Should Know Before Tuning In: The minor ankle injury suffered by LSU redshirt junior McKenna Kelley a couple weeks ago seems to have not been serious since she was back in the vault and floor lineups last week versus Florida. Expect her back again this week.

When You Need to Tell Your Friends You’re Busy: Saturday, January 26 at 8 p.m. ET

Why You Should Cancel Plans For It: This is probably the biggest meet of the weekend, and it’s full of exciting names! The Sooners are consistently one of the best teams in the country, Denver is a strong under-the-radar squad that upset Alabama and Michigan week one and both Arkansas and Missouri are up-and-coming SEC members. Oklahoma will be looking for redemption on floor while Denver will be doing the same on beam after it counted two scores in the 9.300-range yet still broke 196 as a team. The Razorbacks and Tigers have both had seasons with extreme highs and lows so far—both are coming off of low meets that they will want to bounce back from as well.

What Else You Should Know Before Tuning In: Missouri freshman Hannah McCrary’s status is unclear after she didn’t compete last week and was seen on crutches on the sidelines. The gymternet buzz of the past two weeks has centered around Sooner Maggie Nichols, who ended up not competing last week due to a bruised heel. We’ll see if she’s back in action on Saturday, especially after being in Orlando this week to receive the NCAA Inspiration Award.

Why You Should See the Error of Your Ways: Last week gave us a glimpse at this matchup, and boy it did not disappoint! The Thunderbirds will surely be hungry to come out on top after nearly upsetting the Broncos last week. It’s bound to be an exciting in-conference meet you won’t want to miss.

When the Meet’s Happening: Saturday, January 26 at 8 p.m. ET

Why You Should See the Error of Your Ways: Illinois has yet to hit its stride, and Nebraska is in a slump. This meet could be much closer than rankings suggest, and no matter who comes out on top, you’ll see some brilliant gymnastics.

Why You Should See the Error of Your Ways: Ohio State has overtaken Nebraska for the No. 2 spot in the Big Ten. The Buckeyes have hit two 196s in a row on the road; can they make it three? Michigan State has also had a strong past two weeks, hitting big away numbers. What will the Spartans do back in Jenison Fieldhouse?

Why You Should Clear Space on Your DVR: Kentucky has the potential to be a lot better than its current ranking, but it needs to bring its A-game to have a chance against this Florida squad in Gainesville. If anything, watch this meet to see two of the most exciting floor performances in the NCAA that (criminally) have yet to go viral: Alicia Boren’s movie routine and Alex Hyland’s “Fresh Prince” number.

Why You Should Clear Space on Your DVR: Utah is one of the top teams in the Pac-12 and Arizona State is an up-and-coming team. The Sun Devils lost Katelyn Lentz to a season-ending lower leg injury—we’ll see how the team rebounds. If stating this Sun Devil team is on the rise isn’t enough, senior Justine Callis took home the Pac-12 Specialist of the Week title; something an Arizona State gymnast hasn’t earned since 2013.

Why You Should Clear Space on Your DVR: UCLA is again one of the top teams in the country with exciting gymnastics that will only get better as the season progresses. Stanford is coming off a season high 196.125 at Cal and will want to continue that at home. Its gymnasts may not have the star power of the Bruins, but it’s carried by sophomore phenom Kyla Bryant. Battle of the Kylas, anyone? That is, if UCLA doesn’t rest Kyla Ross after she pulled a neck muscle on vault last meet. Plus, it’s a NorCal-SoCal showdown!

READ THIS NEXT: The Mount: Week Four MAG