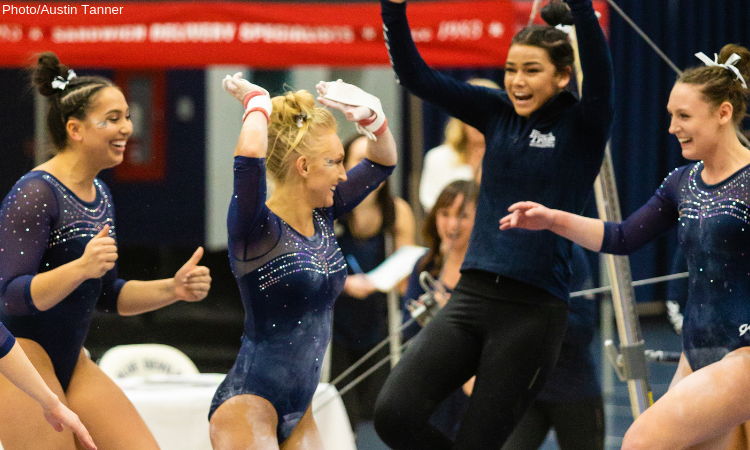 What a weekend! Though there wasn’t much action on the east coast due to cancellations and byes, we still had a lot of exciting things happen throughout the rest of the division. Most notably, we saw UW-Stout take down reigning national champ UW-Whitewater, UW-Eau Claire improve its team total by nearly four points, and a father/daughter matchup out in Colorado between Air Force and Cortland.

After being out of competition last year due to injury, Aguirre was able to compete her first college routine ever this weekend and hit her set in the exhibition spot of Ursinus’ beam lineup!

This speaks for itself…

The Big Storyline: Cortland head coach Sierra Day was back in her old stomping grounds this past weekend and brought her new team to compete against her father’s team—Air Force Academy. It was a bit of a rough meet for the Red Dragons as they continue to struggle with depth problems on bars, but there were still some great performances. Rachel Filipski and Emma Schulz were the top two finishers for Cortland on vault and floor. Filipski’s vault was good enough for eighth place and Schulz’s floor took the 11th spot—good finishes considering they were up against two DI programs. Megan Hanley continues to compete in the all around, remaining consistently in the mid-36.000 range.

Implications: The Red Dragons took an unfortunate hit in the rankings this week, dropping behind WIAC competitors UW-Eau Claire and Hamline.

The Big Storyline: The Warriors put together a stronger meet this week, coming out over a point and a half higher than their performance at the Best of Minnesota meet. Kelly Johnston hit a great beam set to score a 9.625—just a tenth lower than her personal best, and it’s still early in the season. Kennedy Utz was once again a top performer on floor, which was one of the Warriors top events of the night.

Implications: Winona was able to move ahead of in-state rival Hamline which just barely outscored the Warriors last weekend.

The Big Storyline: Like a few other NCGA institutions, Ursinus made great strides this week, increasing its team score by three points. Freshman Emma Gable made her college debut on vault and bars and ended up with a team-high on the latter. The Bears garnered a few top three finishes in this dual against DII West Chester. Lindsay Rush won vault while teammate Emma Brown took third. Eleanor LaFountain was once again the team’s top-scorer of the meet, bringing in a 9.675 on floor and placing third. LaFountain also claimed the all around title.

Implications: The Bears three-point increase pulled them ahead of Gustavus in the DIII rankings. However, they are still resting at No. 5 in the NCGA East conference.

The Big Storyline: Who would have thought that Stout would open its season ranked first in the NCGA?! After finishing last at conference last year, this team couldn’t have asked for a better start to the 2019 season. The Blue Devils broke two school records on their way to defeating two time defending national champion UW-Whitewater. Some highlights were Mallory Dick’s bar set where she set a personal record, Mikala Bugge competing in the all around after being out with an injury last year and Shadae Boone competing a Yurchenko full—making her the first Stout gymnast to compete that vault. Though Whitewater is probably disappointed with the loss, 186.000 puts it right in the mix with the other top DIII teams. Not to mention, the Warhawks had champions on every event. Freshman Abigail Missiaen stuck a massive hand front to take the vault title, sophomore Blaise Wilson had a fantastic performance tying for first on bars and winning floor and the all around and senior Franchesca Hutton claimed the beam title.

Implications: UW-Stout will move to the top of the DIII rankings and UW-Whitewater will move ahead of perennial conference foe UW-La Crosse to claim the second spot in the WIAC.

Records: UW-Stout broke the school bar record with its 47.550, led by Dick’s 9.700—a career high. The Blue Devils’ 187.575 is the highest season opener in school history and is their eighth highest team score ever. And finally, this is the first time since 2009 that Stout has outscored Whitewater.

The Big Storyline: These two teams had opposite experiences this weekend. UW-La Crosse was able to put together a much stronger competition than its opener last weekend while Hamline had a rather unfortunate meet with a rough bar rotation and an uncharacteristically weak finish on floor. The Eagles took the title on all four events and the all around and are slowly starting to add in more difficulty. Sam Weyker competed a Yurchenko full for the first time this season while Faith Sersland competed in exhibition and did a Yurchenko full-on + tuck for the first time. On bars, Kacey Mortenson added a full-in dismount. Top finishers for the Pipers include Meghan Webb’s second place performances on both vault and beam and Darby Slater’s third place on floor.

The Big Storyline: Improvement was the word of the night for these two teams. After opening their seasons with scores in the 181-range, both teams had a lot of room to grow. The Blugolds had a much better bar rotation this weekend and carried that momentum through the final rotation. Some standouts include Ashley Benes’ high-flying hand front on vault and Hannah Lewis’ clean and smooth-swinging bar routine. However one of the most exciting moments was Jordan Ehde’s beam set. After coming out of retirement to compete one final year, Ehde hit an amazing routine that tied for first with Centenary’s Navia Jordan. Speaking of Centenary…WOW! The Ladies looked incredible this weekend. Like Eau Claire, Centenary’s bar rotation was much improved, and its other events were on fire. As usual, Jordan was a top performer for the Ladies on beam and floor, but she also competed a hand front in the exhibition spot on vault. Tavia Smith also looked great and just had some little struggles on her beam series. Finally, freshman Kendall Sanders competed all around for the first time and finished with a strong 37.750.

Implications: Both teams will move up in the rankings thanks to their big performances this weekend. UW-Eau Claire moved up from No. 77 to No. 75 and Centenary moved from No. 76 to No. 73.

The Big Storyline: There were major struggles on bars for both teams, with only the four top finishers able to crack the 9.000 mark. Bar rotations aside, this wasn’t a terrible meet for either squad. UWO would have been right on pace to score around a 185.000 again and Gustavus a score in the low 180s, so with full difficulty added back in and just a few less falls these teams should be sitting in a score range that feels more comfortable for them. Both teams had some great performances with the Titans Emily Gilot taking the vault title with a nearly stuck Yurchenko half and the Gusties Amanda Malo scoring big for her clean tumbling.

Implications: UW-Oshkosh takes a bit of a hit in the rankings, moving from No. 70 to No. 74. However, this is mostly due to other teams starting their seasons or drastically improving their scores as opposed to the Titans falling because of their struggles.

The Big Storyline: Gustavus still hasn’t quite put everything together yet, but it did do enough to pull out the win against Winona. After a rough bars and beam rotation, Winona was trailing the Gusties by three points. However, the Warriors rallied in the final rotation to score its highest event total of the night on floor. Kaitlyn West was a solid contributor for the Warriors, claiming two event titles, while Sam Ardy claimed two for the Gusties.

Implications: Coming into this meet, the Gusties were only half a tenth behind the Warriors. Thanks to their strong finish tonight, they should pull ahead in the in-progress rankings as we head into week four.