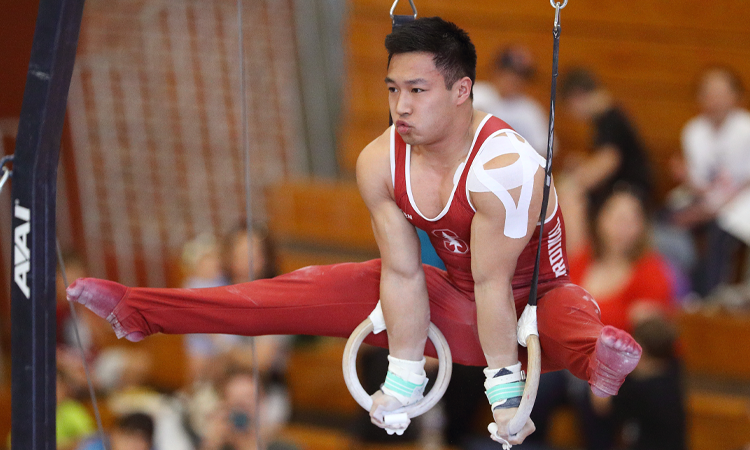 With only two teams not in action, it was another full slate of men’s meets on Saturday. Oklahoma showed us why it’s the four-time defending national champion by posting the top score of the year in front of a home crowd, and Michigan’s season debut was spoiled by a slim margin by Illinois in Chicago. Navy also continued on its hot streak, proving that the Midshipmen just may be a dark-horse contender for the NCAA team finals this April.

The form. The stick. The reaction.

Matt Davis (Army) – All Around

The freshmen continue to impress this season. With Penn State’s Sam Zakutney out of the all around, Davis seized the opportunity and won the title himself, scoring four points higher than last week while doing so. Clearly, competing against the No. 3 team in the country didn’t phase Davis, so watch for him to pull some more “surprise” performances later this season.

In November 2018, former Oklahoma gymnast Jeremy Killen passed away. In their home opener, the Sooners held a tribute for Killen before the meet and the gymnasts donned special patches on their leos to honor his memory. Killen was a member of the program from 1994-1997 and won an NCAA title on floor his senior year.

UIC at the Windy City Invite

With the future of the UIC gymnastics programs uncertain so is the future of the annual Windy City Invite. Deadspin writer and gymternet favorite Dvora Meyers shot this picture at the end of the meet, capturing our hearts in the process as well.

The Big Storyline: Penn State cooled off from its big opening weekend, scoring a little over 10 points lower than last weekend’s trip to Army. Some of that can be attributed to star Sam Zakutney not competing six events and struggling on two of the three he did do. For both teams, parallel bars and high bar were a struggle, with only a handful of gymnasts breaking 13.000. Despite that, Army put together a performance nearly identical to last weekend while also having freshman Matt Davis snag his first career all around title in only his second meet.

Implications: With Penn State only posting the eighth highest score this weekend, it will certainly drop a few spots in the rankings this week. Army too will drop in the rankings with Iowa and Michigan in their season debuts posting higher scores than the Black Knights.

Records: Army posted a 67.000 on rings to set a new program record. The previous high was 66.450 set last February in a win over Springfield and William & Mary.

The Big Storyline: Clay Mason Stephens grabbed two of Illinois’ four event titles as it won its fifth straight Windy City Invite by edging Michigan in the team competition. Alex Diab and Michael Paradise won their events, rings and pommel horse, for the second weekend in a row as the Illini fell just short of matching their score from last weekend. Michigan had a quartet of event winners, led by Cameron Bock’s two point win in the all around in the team’s season debut. Minnesota’s lone event winner, Vitali Kan, repeated his performance from last week by tying for first on vault. Iowa’s highest finisher was Jake Brodarzon who took third on rings, and Washington’s highlight was Nathan Tsuji’s seventh place finish on floor. Kaleb Booth led UIC with a 16th place finish on vault.

Implications: With over half of the Big Ten teams competing here, it provided some clarity as to how the conference may shape up. But the small margin between teams’ scores show that we may see some parity throughout the season as well.

Records: Stephens’ two event titles are the first of his career as he sat out all last season with an injury. Minnesota’s George Khoury, the former team manager, made his Gopher debut by leading off the team on pommel horse.

The Big Storyline: In its home debut, Stanford was unable to match its giant score from last weekend but was still able to post the nation’s second highest score of the weekend. Misses on pommel horse and high bar cost the Cardinal some valuable points and allowed the Golden Bears to nab a couple of event titles. California’s score improved by over three points from last weekend as did Darren Wong’s all around total, hitting 81.000 and posting the highest all around score of any freshman this season. California closed the gap on Stanford quite a bit Saturday and will look to edge even closer to the Cardinal next weekend at home in the team’s third straight matchup.

Implications: With Oklahoma’s huge total this weekend, Stanford will fall in the rankings but should still be ranked No. 2 after posting the fifth highest score so far this season. California’s ranking should be similar to its current No. 9 ranking after improving upon its score and outscoring Iowa’s season debuting score.

Records: Stanford has taken a 2-0 lead in the series standings between the two teams this year with five more regular season matchups to go.

The Big Storyline: Oklahoma did as Oklahoma does, posting the nation’s top score this year by over seven points. World medalist Yul Moldauer also only competed on rings, making Oklahoma’s potential high score scary high. Air Force and Arizona State came into the meet only separated by two points in the standings, but the Falcons hit 35 of 36 routines to outperform themselves from last week by almost 13 points, giving them the edge over Arizona State. Senior Lukas Texeira of Air Force was also the only non-Sooner to grab an event title, using his signature high bar routine to match the scores of Oklahoma’s Levi Anderson and Gage Dyer.

Implications: After winning its 104th straight matchup, Oklahoma will retake the No. 1 ranking after spending this week ranked second. Both Air Force and Arizona State should continue to sit just outside the top 10 with their totals.

Records: Genki Suzuki of Oklahoma won two events on his way to posting the highest all around score in the country so far this year. Arizona State’s Kiwan Watts scored an 82.250 in the all around to post the second highest.

The Big Storyline: Navy continued to impress in its second meet, besting 400 and posting the fifth highest score of the weekend. Led by Lucas Beltran’s titles on floor and vault, the Midshipmen won or claimed a share of five event titles. William & Mary was led by Jacopo Gliozzi and David Watkins, who won pommel horse and rings, respectively, while Springfield’s Stephen Lewis took the all around title. Temple’s Nicolino Dibattista took second in the all around as the Owls improved upon their season opening score by nearly 50 points by adding two more gymnasts to their lineups.

Implications: Navy has cemented itself as the favorite for the ECAC title through the first three weeks while William & Mary and Springfield showed the battle for third will be a competitive one.

Records: For the first time since the 2017 season, Temple was able to compete full lineups on every event and record a team score that will compete to be ranked in the top 20.

The Big Storyline: After only bringing four gymnasts to the Rocky Mountain Open last weekend, SC United’s full team debuted this weekend against Arizona State’s Maroon Team, the B-team of sorts for ASU. SC United was able to put up six gymnasts on four events but still fielded five on parallel bars and high bar to be able to achieve a competitive team score. Calvin Valrie won two event titles en route to taking the all around win while Cameron Edwards-Rea was also a double winner by posting the top score on floor and vault.

Implications: Meets between GymACT teams are building up to be very competitive this year with Temple now able to field full lineups and NorCal United just a few routines short of doing so as well. All three of these teams are pushing each other to do exactly what GymACT set out to do, promote a higher level of competition.

Records: SC United’s score of 349.600 is only just under two points shy of achieving its best score since the 2017 season.

Controversies: We have no scores for Arizona State’s Maroon Team! The results here will be updated if they become available, but at the time of original publication we have been left in the dark.