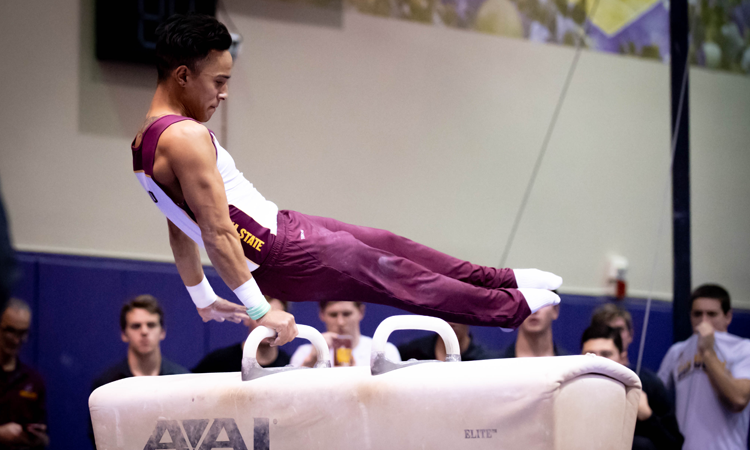 The first full weekend on men’s meets is behind us and it was full of surprises, upsets and great gymnastics. The weekend was highlighted by the impact performances of freshmen making their NCAA debuts, and the open style competitions welcomed postseason caliber performances from teams across the nation. The Sooners’ biggest threat to their five-peat has emerged in the form of Stanford, and Penn State showed us why it deserved a higher preseason ranking.

Stephen Nedoroscik’s ability to swing horse is nearly unmatched. He brings the difficult skills while also performing his set with nearly flawless execution, making it no question as to why he is the two-time defending NCAA champion on the event and brought in the highest score among all gymnasts over the weekend.

In a meet with four top 10 teams, a gymnast from one of the lower ranked squads taking an event title was an uphill battle. However, Texeira had no problem doing so, easily outpacing the field with his high bar routine featuring a Yamawaki to Gienger combination, multiple Tkatchevs and a full-twisting double layout dismount. Watch for Texeira to win high bar event titles for the Falcons all season long.

Brody Malone (Stanford) – All Around

In a weekend full of phenomenal performances by freshmen, none stood out more than Brody Malone’s all around debut for Stanford. Malone was the only freshman to hit 80.000 in the all around and helped propel Stanford to the highest team score of the season so far by recording top two team scores on rings and vault. Malone was also the lone Cardinal to compete the all around and have all scores count towards the total.

The Big Storyline: Oklahoma took another step toward its fifth-consecutive NCAA team title by winning the Rocky Mountain Open and posting the highest score over the weekend. The win also extended the Sooners’ undefeated streak to 102 consecutive meets. Despite a few falls on parallel bars, Yul Moldauer only competing two events and only winning one event title, Oklahoma was able to outscore second place Nebraska by nearly seven points thanks to its consistent performances through all six rotations. The Huskers, however, were able to upset both Minnesota and Ohio State—two teams ranked ahead of them in the preseason coaches poll—with their performance this weekend.

Implications: With Kiwan Watts back in the lineup, Arizona State’s Gold Team improved its score by over 12 points from last weekend, placing itself as the favorite to win the USAG Collegiate Championships again this season.

Records: Air Force senior Lukas Texeira matched his school record score of 14.450 on high bar to take the event title, outpacing the rest of his competitors by 0.650.

The Big Storyline: Stanford made its case as the favorite to upset Oklahoma this season by posting a massive 411.250 team score to open its 2019 campaign, tying the score of the defending NCAA team champions. Senior star Grant Breckenridge led the way for the Cardinal, taking the all around and parallel bar titles. But it was the debut of three freshmen that stole the show. Ian Gunther, Brody Malone and Blake Wilson all competed for the first time for Stanford, performing amicably and showing that the Cardinal is a legitimate NCAA title contender.

Implications: California and Stanford will meet seven times during the regular season along, so in the overall standings Stanford now has a 1-0 record over California.

Records: Highly touted California freshman Darren Wong placed third in the all around with a 77.700 in his first meet as a Golden Bear. Wong also led California with the team’s highest scores on pommel horse and vault.

The Big Storyline: In his Illini debut, freshman Michael Fletcher grabbed the high bar and all around titles to help lead Illinois to an easy victory over in-state rivals UIC. Senior Alex Diab competed in four events and won three as he posted a giant score on rings to lead the nation on that event. UIC, despite losing team leaders Asad Jooma and Satchel Hudson to transfers, opened its season strong, posting a score only a few points below previous season openers.

Implications: UIC will be looking to increase its team score over the season to try and contend for an ECAC championship title in likely its final season as an NCAA program. Illinois was picked to win the Big Ten conference this season but was outscored by Penn State by several points this opening weekend.

Records: Reigning NCAA rings champion Alex Diab started his campaign to repeat as champion strong by upping his career high on the event in his first routine of the season. Diab scored a 15.050 this weekend to surpass his old high of 15.000. Michael Paradise of Illinois also notched a career high 14.850 on the pommel horse to take the event title.

The Big Storyline: Penn State swept all the events and ran away in the team event to claim its sixth straight West Point Open title and 21st overall. Junior Sam Zakutney had a busy weekend for the Nittany Lions, winning the all around on the first day of competition and winning all three event finals he competed in on the second night. Zakutney’s performance in the all around this weekend is also the highest all around score of the year thus far. Second place finisher Navy had to use a big final rotation to surpass rival Army, who was sitting in second place after the fourth and fifth rotations.

Implications: Penn State, picked to finish fourth in the Big Ten, posted a team total nearly three points higher than any other Big Ten team this weekend. Navy emerged as the frontrunner for the ECAC title this year, but Army’s strong performance at home showed that it is in the conversation for the championship title as well.

Records: Temple’s team score at this meet outscored all of its totals from the 2018 season, and according to Twitter, Temple was missing two key lineup contributors. Look out for the Owls in the weeks to come!