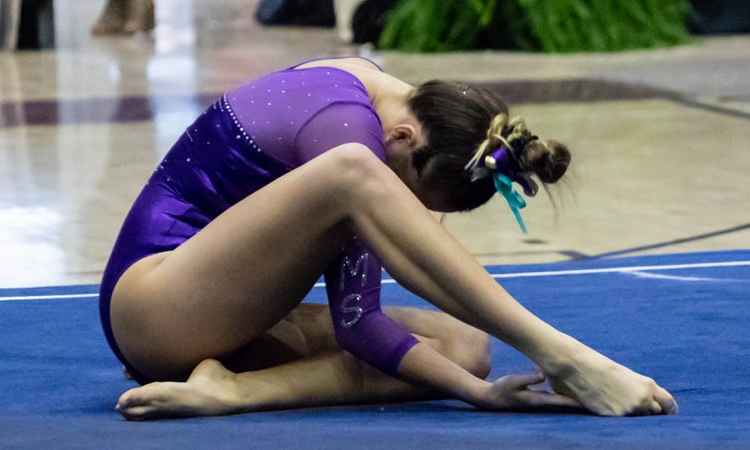 USAG competition really ramped up this week with nearly all the eligible teams competing. UIC still holds the top spot thanks to a solid 194 while Bridgeport also impressed alongside Yale.

We wanted to show more love to the non-top teams in college gym in 2019, so we broke out our Dismounts into DI, DII (all USAG nationals teams) and DIII. Each week, we’re also dishing out a few superlatives for some of our favorite moments, looks and results from the weekend of competition. Below those, you’ll find your typical results and highlights from every DII and USAG nationals-eligible team’s meet. For reference, teams eligible for USAG nationals include those with less than seven and a half full scholarships. They include Ivy league schools, all DII teams, Air Force, Centenary, SEMO and UIC.

Brown had some challenges in its opening pair of road meets, but Costa’s breakout performance, especially on the second day, gives the Bears plenty to be optimistic about. Her technique shined on bars where she picked up an event win with a stuck landing and a 9.850.

Southern Connecticut beat its opening week record due in no small part to freshman Stahlbrodt who competed all around in her first meet and hit three for four, leading the team on all but vault. The Owls graduated several stars last year, but it looks like their legacy is safely in the hands of this talented newcomer.

The Flames were dominant this week to turn in the first 194-plus score of the USAG season in what may be their last home opener ever. It’s bittersweet to see the team so successful and know that it might be too late to change anyone’s mind about the state of the program.

The Big Storyline: Lindenwood got its season off to a solid start on the road in 2019, finishing a pace back from its Division I competitors but showing a lot of potential in a tight-scoring environment.

Implications: The Lions make their debut at No. 5 in USAG rankings and No. 3 in MIC.

Records: Courtney Mitchell set a career high of 38.850 in the all around while Lindenwood recorded its second highest score in a season opener.

Controversies: Breanna Franklin scored 9.300 for a hit on her 10.0 SV vault. The vault had imperfect dynamics and a generous step back, but it was still scored bizarrely harshly, even compared to the rest of the meet. She also scored a 7.950 on floor that was adjusted up to a 8.850 before scores were certified. The routine was not streamed, so we have no explanation for the change.

The Big Storyline: Seattle Pacific was only able to get one freshman into its opening lineups, meaning some of the others are likely working through injuries. But it did have a respectable start led by junior Darian Burns and senior Itzia San Roman.

Implications: The Falcons start the season at the bottom of the MPSF more because of good of starts Alaska and Air Force had than because of any shortcoming of their own. They came very close to upsetting Sacramento State and will have additional chances to claim a conference win as the season goes on.

The Big Storyline: Texas Woman’s put up another strong home performance, led by Bria Northrop’s triumphant return to the all around and a breakout day from freshman Isabel Goyco.

Implications: TWU improved on its first week score and was able to stay near the top in conference and national rankings, trailing only UIC in each.

Controversies: Morgan Colee had a scary fall on her bar dismount, but she seemed to walk away unharmed.

The Big Storyline: UIC cruised in its home opener, recording the highest score of the USAG season once again. Centenary finished an impressive second place on beam.

Implications: The Flames hold onto first place in both USAG and conference rankings this week

Records: UIC’s Kayla Baddeley and Ashley Albrecht set career highs on floor, and Baddeley claimed one on beam as well.

The Big Storyline: It will be fascinating to see how Air Force utilizes its massive freshman class in 2019, and at this meet we got our first look at three of the newcomers as well as some key returners. Senior Analise Howard was missing, which is disappointing but not too surprising after she also was absent from the Falcons’ intrasquad. The team put up a solid score despite a challenging bar rotation, meaning that they have plenty of room to grow over the weeks.

The Big Storyline: SEMO hasn’t managed to find its feet yet this season, registering the third lowest score of any team week two. There were highlights though, including freshman Anna Kaziska’s beam and all around titles. But it isn’t in a good position as a team at this point.

Implications: The Redhawks are ranked No. 68 in the NCAA standings, as well as at the bottom of their conference and second from the bottom in USAG.

Controversies: The originally reported score for SEMO was a little higher than the official one. We’re not sure if that indicates a clerical error or if a score was reviewed.

The Big Storyline: Yale put up an impressive score to open its season and narrowly beat out fellow USAG team Bridgeport.

Records: Both Yale and Southern Connecticut recorded the highest opening score in their programs’ history.

The Big Storyline: Brown didn’t have the cleanest start to its season, struggling through a series of misses on beam and floor, but it should be excited about strong debuts from freshmen Costa and Sophia Petrillo, as well as a bar title from Kate Nelson.

Controversies: There was a delay before the second rotation as the bars suffered a structural issue, possibly having to do with the floor anchor or the anchor cable.

The Big Storyline: The Bears crept closer to Alaska in the second meet of the weekend on the strength of two very clean rotations at the beginning, and they were able to pick up several more individual titles.

Implications: The improvement wasn’t enough to lift Brown from the bottom of the ECAC conference after week two.

Controversies: A judging delay in the second rotation over the bars score for Alaska’s Kaylin Mancari led to the rest of the rotation being offset by one routine.

The Big Storyline: Cornell senior Lyanda Dudley, who was out most of the 2018 season with an injury, made her comeback on vault, bars and beam. Unfortunately we can’t have nice things, and we learned that all around star Amy Shen will be out for the season due to an ACL injury.

Implications: Cornell debuts third in the ECAC conference and seventh in USAG standings.

The Big Storyline: Penn recorded the highest balance beam score amongst the four teams with a 48.500, led by a 9.800 from Caroline Moore.

Implications: Penn currently sits in fourth in the ECAC conference and ninth in USAG standings. West Chester ranks one spot ahead in USAG standings and second among the Division II ECAC teams.