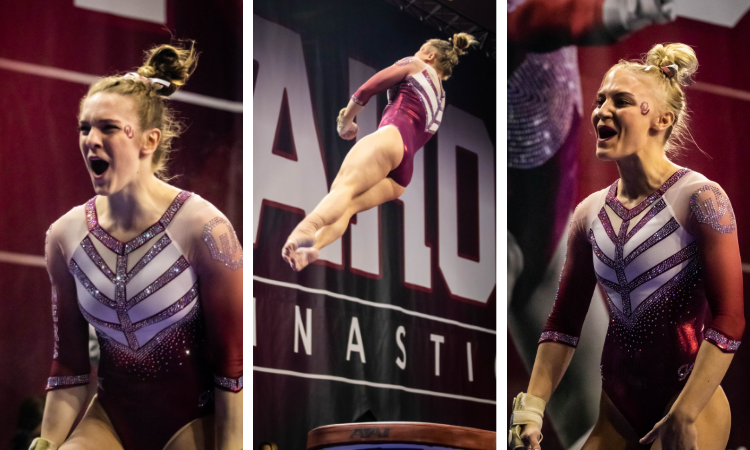 The Oklahoma Sooners became the first team Friday night to field a whole lineup of 10.0 start values since the devaluation of the Yurchenko full, as they went on to beat No. 5 Georgia by a score of 197.825 to 195.300. But it wasn’t a happy accident or something that happened overnight.

“We’re very methodical about what we do,” head coach KJ Kindler said. “We’re the first team since the rule change to ever do that, so that’s a pretty cool thing. Coach Lou Ball should be very proud.”

They say the best work is done when no one is watching. That can’t be more the case for the Sooners. It all started in the back room of the Sam Viersen Gymnastics Center eight months ago.

Some days, Kindler doesn’t even see him. But in this back room, Ball set a goal with his vaulters to be the first team to fill a lineup with 10.0 start values. However, it wasn’t like the team had all these Yurchenko one and a halves waiting in the wings and just hadn’t used them yet.

Senior Nicole Lehrmann, who had only ever competed a full before 2019—and never competed vault at all before her junior year—was one of the largest factors in helping the team achieve the goal. She has solid dynamics on her full, but upgrading isn’t as simple as adding another half twist.

“It was on my bucket list to compete a one and a half,” she said. “I’ve worked really hard at it this past summer; it wasn’t always easy.”

The method to Ball’s madness is actually pretty simple: Find the consistency in practice so you know you can hit the skill no matter what in competition.

“By laying that expectation on us, it helps a lot when we get to a meet atmosphere and have those nerves,” Lehrmann said. “It helps to know I do six, seven, eight one and a halves every day, and they’re good even at the eighth one.”

The consistency appears in Ball’s coaching style as well. He’s not strict one day and “la di da the next,” Kindler said. He always expects the best, and the gymnasts give it to him. And while he’d love every one of his vaulters to perform a 10.0 start value, he does recognize their capabilities, ensuring even the Yurchenko fulls are “the absolute most impeccable 9.950 that they can do.”

And while Oklahoma may be the first team to accomplish this feat, it won’t matter unless it brings that consistency instilled in practice day in and day out to the rest of the season, keeping up the string of six 10.0 starts for every meet to come, right into the national championships in April.