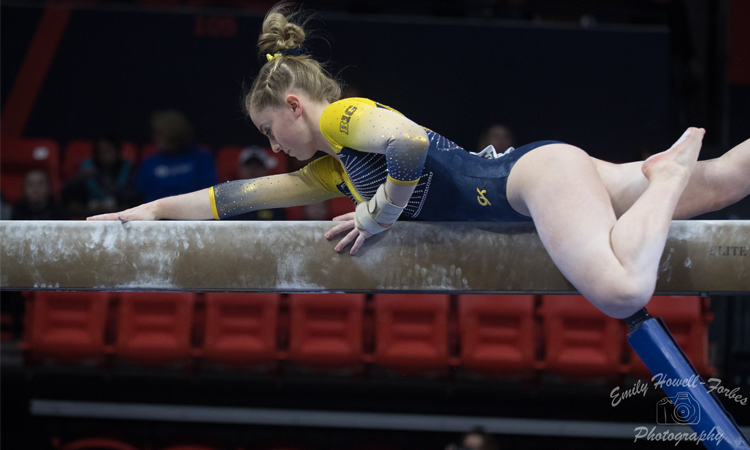 Alabama hosts Michigan, Denver and Bowling Green in a quad meet that is sure not to disappoint. It’s the second quad meet in as many weeks for both the Crimson Tide and Wolverines, both of whom will be eager to improve on last week’s performances. Meanwhile, it’ll be our first look at the Pioneers and Falcons who open up their seasons tonight.

Alabama is coming off of a quad meet win, but with a score of 194.750 the Crimson Tide look to improve. The team was mainly held back in week one due to beam, tallying just a 47.700 after two falls and tight judging in regards to the new beam pause rule. The talent is there—and it’s just the start of the season—so look to see if the team can improve upon this total tonight and in weeks to come. Shallon Olsen and Emily Gaskins lead the Alabama freshmen while upperclassmen like Wynter Childers, Lexi Graber and Ari Guerra are ones to watch as well.

Michigan also had its share of mishaps at the Cancun Classic, rebounding from a shaky start on beam that consisted of the first two gymnasts falling to tally a 196.050 overall. With Alabama also having struggled last week, this meet could easily come down to who can put up the better number on beam. Watch for freshman Natalie Wojcik who had a breakout first meet that included scoring a 9.975 on her Yurchenko one and a half. Her classmates poses similar star power and will impress as well. Olivia Karas has also returned, competing vault (only a Yurchenko full), bars and beam in her journey back from an Achilles tear.

It’s our first look at Denver in 2019. The Pioneers lose just three routines from 2018 while gaining a freshman class that includes Alexandria Ruiz and Alexis Vasquez. Expect Maddie Karr and Lynnzee Brown to lead the way in the all around for the Pioneers while Mia Sundstrom should compete in the all around as well. Courtney Loper is back after missing most of 2018 for unknown reasons. According to tentative lineups, we can expect to see her on beam and floor. With this in mind, the Pioneers are poised to be a deeper team in 2019 than they have been in the past few seasons. Beam cost the team a berth to nationals last season; with new faces, can it fare better on the event in 2019? Vasquez will certainly lead the way on the precarious event, and Kaitlyn Schou won’t disappoint on the event either. Watch to see how the lineup plays out tonight, especially with what we know about Alabama beam last week.

Bowling Green also kicks off its season tonight. Jovannah East will lead the Falcons in 2019 while the team’s freshman class should soften the blow of some of the team’s losses from 2018. Of the freshmen, Tess Muir is slated to compete vault, beam and floor, Katelyn Goldstrom is expected to compete on bars and Paige Bachner is likely to compete floor per Bowling Green’s meet preview. Classmate Anna Maria-Kanyai’s status is unknown—she was seen in a boot in late-December. Especially watch for the Falcons on floor, where their choreography never disappoints.

The meet is being streamed on SECN+ if you’d like to follow along, and live stats can be found here.

And Denver’s tentative lineups are:

Mahoney – another yfull with clean full. STUCK. She got the Bama hammer, which is apparently similar to the stick crown. 9.825

Loper – small checks here and there; nothing major; tuck full, stuck. Nice return for her! 9.8

Vasquez – this is the freshman debut we’ve beem waiting for! long wait in between routines. front aerial bhs loso, small check and pause between aerial and bhs, leap series nice; does a Y-turn, so unique for NCAA! beautiful sissone to follow. side aerial to gainer full stuck! solid debut for her. 9.8

Karr – how is she already a junior? side aerial bhs good; hitch kick side somi solid; beat jump to straddle 3/4 maybe a slight check; stuck ro lay full to finish. 9.85

Lawson FX – opens with nice double pike; great flexibility on leaps; some form on her connection pass, but keeps it in bounds and lands it; did I mention I LOVE BGSU floor choreo? little low chest on double tuck but solid overall. 9.45

Beyer – OOB on first pass, great flexibility on leaps; handspring lay lay half to split jump nice; has to put hands down on doulbe tuck. 8.8

Augustine – nice combo pass, may have switched to a pike to get the lay around. good last pass, missed the rest cuz the stream is switching around so much  Seemed like a solid routine overall! 9.725

East – 2.5 to lay good — so much power! looked like she was close to OOB; did a side pass too, a front 1.5; again loving the choreo; great last pass! this is why she’s their anchor. So. Good.

A little bit of a shaky start for BGSU on floor. Bama started well on vault and is currently in the lead. Denver had a very solid beam rotation to start its season and Michigan had an ok start as well. A little 9.7y for the Wolverines.

We move on to vault for the second rotation of the night. pic.twitter.com/ZGrRYihApx

Dickson UB – good bail, not quite to hs; hits handstands into tkatchev, great flexibility; just a step on the dismount; that’s her sophomore debut! 9.8

Guerra – straddled jaeger, nice; bail to hs looked good to me; some legs here and there; nice DLOk just a step back 9.85

McLean – the fact that she’s beaming is…not good? bhs loso is good, as is her full turn; cat leap switch side solid; jump connection to standing loso; saved the landing on her ro 1.5 9.75

Funk – good connection and extension on her leaps; side aerial to gainer full, the routine looked good from what I’ve watched! 9.85

Wojcik anchored beam at the same time as Karr floor and she did very well as well! 9.875

Sundstrom FX – opening double tuck, good landing, maybe slightly large lunge; she has the same music as last season; lay to lay full nice and controlled; popa to wolf full good; her routine is unique in the fact that she does 2 leap series to get up to difficulty rather than 3 tumbling passes.9.725

Kern – Lay lay full good; mised the start; short double back but lands; nice routine up until that last pass 9.575

Ruiz – making her college debut here! off to a solid start so far; ro 1.5 lay solid; I LOVE her choreo. good, clean, secure double pike to close. GREAT start to her collegiate career. 9.75

Schou – nice routine so far; good to see her back in action! fhs rudi split jump is lovely — she’s such a twister! great routine for her 9.825

Brown – opens with her HUGE DLO. so amazing. I can’t even. nice leap connection to drop to floor, so fun! 1.5 to lay to stag jump solid; closes with a great double pike! basically stuck. Great to have her back on floor for sure! 9.875

Competition between the top three is TIGHT. Just 0.25 is separating Denver from Alabama and Michigan is just 0.025 above Denver. Beam scores are definitely erring on the low side once again in Tuscaloosa. Another good bars rotation for Bama. Vaults looked good for Bowling Green from what I saw, they’re definitely making use of what they have! Michigan will be proud of this beam performance after last week, even if the scores are lower than you’d expect for an SEC meet. Denver had another solid rotation on floor. They’ll want to work on getting some of those landings nailed down, especially in the lower half of that lineup in order to boost their scores.

We will head over to floor next. #GoBlue pic.twitter.com/VNDyYfd9D6

Freshman Kate Goldstrom about to make her collegiate debut leading off the bars lineup. pic.twitter.com/NDobV78tBw

Kanyai – shap to pak, some leg form; nice final handstand and then is short on blind full and then again. Didn’t finish routine. 8.275

Gaskins – has to do an extra circle around on her mount…which the commentators just called a dismount…definitely some checks here and there; solid side aerial; gainer full with small hop. 9.25

Osman FX – great start so far; little short on the lay on her combo pass but stays on her feet, just a slide back; good double tuck to close. good leadoff routine! 9.7

Farley – nice double pike to open; some form on her combo pass but pulls it around; closes nicely as well. 9.7

Karas – her floor debut; with full difficulty and all! Opens with her dbl arabian; switch half wolf full good; 1.5 to lay secure landing; it’s great to have her back on floor! double full to close, a little too much power, but a solid return to floor for her! 9.725

Aside from Ruiz, Denver looked good on vault for the first meet of the year. Bowling Green had a ROUGH go of it on bars and only scored a 46.2 on the event. And Michigan looked good on floor from what I saw, just some form issues and short passes here and there were keeping them down. One more to go in Tuscaloosa!

We will close out the season opener on balance beam. Freshman Tess Muir opening up the rotation. pic.twitter.com/v1fqtB6kDw

McLean – just does the full, but it’s a beautiful one! flaired and all.

Wojcik – another gorgeous 1.5 from her!

Brown – maloney to pak, basically how she normally does it; shap half good; lovely DLO, just a small hop forward; another great routine for her! 9.85

Beyer – we mised the beginning, but she dismounted with a unique standing loso to gainer full dismount. 9.7

Augustine – beat jump to straddle 3/4, didn’t look quite extended to me; stuck lay full dismount. I obviously missed something. 9.125

Bachner – front toss good; a little off on side aerial to back tuck and comes off, but love the uniqueness of that! she’s just a little nervy, but ends well with just a small hop in place on her dismount. 9.1

Mahoney – we missed the start, short double tuck that opens early and bounces forward, rolls out of it. 9.3

Armbrecht – did’t see the beginning, but nice rudi to stag jump to end. 9.875

Olsen – hugeeee piked full in to open; front tuck through to double tuck secure; closes with double pike, almost too powerful but mostly hones it in on the landing. 9.9

We’ve got an upset in Tuscaloosa as the Pioneers take this one! Super close between Denver, Michigan and Alabama but the Pioneers ultimately came out on top. Scores were a little tight throughout the meet, maybe this is becoming a Bama trend? What? An SEC team with tight scoring? I just counted. Only 5 scores over 9.9 for the entire meet.

Definitely a rough meet for Bowling Green and lots to improve on for the Falcons. Michigan turned in about the same performance as last week but I think they’ll be happy with the improvements on beam especially, even if it’s not reflected in the final score. Bama still definitely had its moments on beam, but again still improved from what I saw last week. Denver remained pretty consistent throughout the meet and used its final rotation on bars to seal the deal. There’s definitely some small things the Pioneers will want to improve over the season but it’s only the first meet and it’s definitely a great start to the season for them.

A Twitter Moment of the meet can be found here.