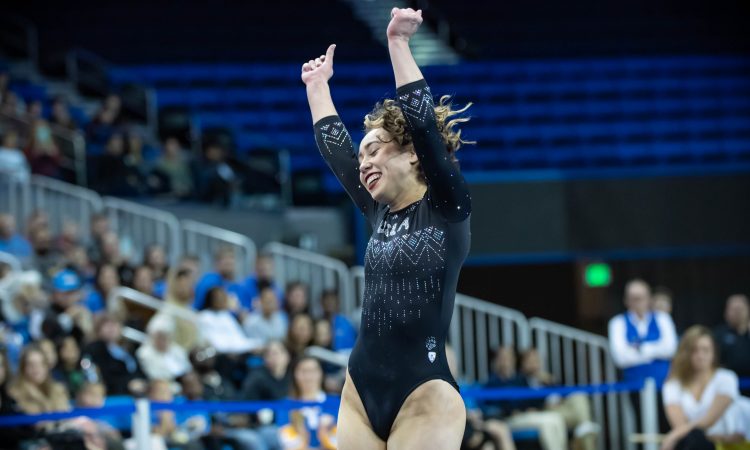 UCLA opened its 2019 season on Friday night with a routine win over Nebraska, picking up the team title by a margin of a point and a half and registering its highest first-meet mark since 2005. The first rotation was punctuated by junior Kyla Ross’s career high 9.975 on vault after sticking her upgraded Yurchenko one and a half, and three Bruins registered scores of 9.950 on floor.

Visiting Nebraska started the season a little more slowly, but it should be heartened by junior star Taylor Houchin’s return to the all around after an injury held her out of floor in 2018. Houchin led fellow Nebraska all arounders Megan Schweihofer and Sienna Crouse with a 39.350 and picked up the bars title with a 9.925.

Katelyn Ohashi’s floor routine has been the subject of a great deal of speculation over the past weeks, but Ohashi was keen to point out that the secrecy surrounding it wasn’t a ploy for attention—the routine simply wasn’t finished yet. She and head coach Valorie Kondos-Field felt the pressure to follow up on 2018’s wildly successful Michael Jackson routine keenly and didn’t decide on music until very late in preseason.

In the end, the concept came from UCLA alumna Ariana Berlin, who Kondos-Field invited over for dinner to help the pair brainstorm. The bones of the routine came together in the last training sessions of 2018, but Kondos-Field video chatted Ohashi nearly every day over the holiday break to tweak it, and the changes continued until, in Kondos-Field’s words, “about 5:30 tonight.”

Learning the routine so late certainly didn’t adversely affect Ohashi’s performance quality, which Kondos-Field firmly believes is better than it’s ever been. But it did have one effect—Ohashi was genuinely uncertain if she’d be able to remember her choreography.

“My biggest goal was literally remembering my routine, so… I got it!”

Ross commented that the question she’s been asked most this year is how Kondos-Field’s imminent retirement has affected the team. For the most part, she doesn’t feel that it makes a big difference.

“I think that we go into every season the same way, the same motivation, the same intensity and the same love for each other, so I didn’t feel any extra emotion coming into today,” Ross said.

Ross and Ohashi agreed that one of the biggest challenges of the preseason was their leadership roles on the team. For one, it’s not a role that comes naturally to either gymnast—Ross has had to work hard on speaking up in group contexts while Ohashi has struggled with the responsibility of her charisma often leading her teammates to follow her example.

Most of all, though, leadership roles come with difficult logistical decisions. The two, giggling, related the outlines of a strategical miscue that resulted in the whole team missing their Christmas party in December.

“One day… me and Katelyn tried to come up with a workout and we messed up,” Ross said. “It was actually really hard.”

Kondos-Field chimed in with the full story: Apparently Ross and Ohashi had felt that the team’s weekly intrasquads weren’t putting enough pressure on them and wanted to up the stakes. “So they said maybe everyone should have to hit a series,” Kondos-Field said. “So there’s, say, 15 girls who do beam, and we’re going to have to hit 10 in a row—one after the other—and the same thing on bars.”

The team tried again and again to accomplish the task Ross and Ohashi had set and couldn’t do it. But they refused to give up, even when they ran several hours over the scheduled length of the practice. Kondos-Field ultimately called her husband to bring the food from the party, which she planned to host at her home, to campus because she had no idea how long the task would last.

Ohashi and Kondos-Field agreed that that day was the day the 2019 Bruins transformed from a good team into a great one, and Kondos-Field praised her athletes’ willingness to raise the bar and follow through on a self-imposed assignment instead of accepting defeat.

Ross had a slightly different take. “I’m surprised no one hated us for that.”

“I’m so grateful that we won last year because it really takes the pressure off this year, not to have to do it for ‘Miss Val’s last year.’” – Valorie Kondos-Field

“This year I really decided that I’m gonna do whatever it takes to be able to get that 10.0 vault for my team, so I just kept working hard even though the one and a half scared me so bad.” – Kyla Ross

“One of the reasons that Margzetta isn’t on floor today was that we switched her routine around Wednesday. So poor little thing, let’s go exhibition, and we’ll see how you do. She killed it.” – Valorie Kondos-Field