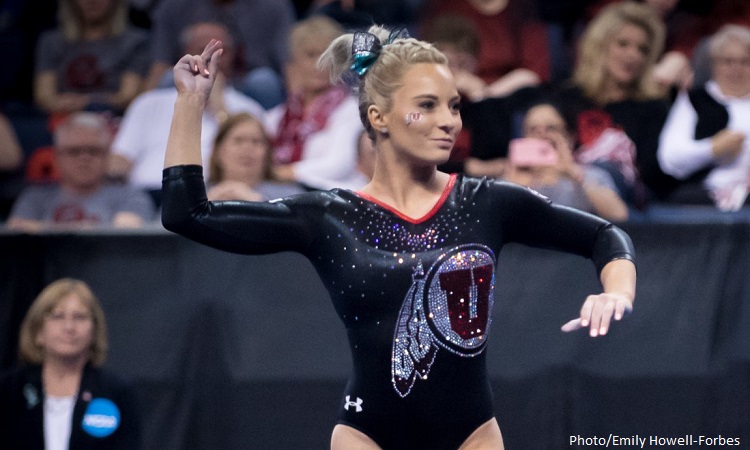 This Big Ten/Pac-12 matchup is a bit lopsided; it is definitely more about our first look at Utah and Penn State in 2019 than it is about who will win in the Huntsman Center.

Utah looked prepared in last month’s Red Rocks Preview. Look for bars to be a weakness—if there is one; the event featured several misses in December. That is nothing to be concerned about week one, rather a point the team likely focused on in the final weeks of preseason. Freshmen Hunter Dula and Adrienne Randall should have an immediate affect, and of course keep an eye on MyKayla Skinner to continue her all around title-taking ways.

For the Nittany Lions, the preseason preview was a touch rockier, full of classic early-season errors and nerves. Lauren Bridgens should remain a reliable all arounder for Penn State, and the team will need Sabrina Garcia to find consistency in her senior season to succeed. Watch for newcomers Erynne Allen and Jessie Bastardi to crack a few lineups.

It looks like Utah will be sporting a new leo!

Notes: Dymiana Cox (Penn State, ACL) and Cammy Hall (Utah, Achilles) are out for the season. Missy Reinstadtler (Utah) had a sprained ankle and sat out the Red Rocks Preview but is presumed healthy.

Announcers reminding us that Sarah Shire Brown competed for Utah in the 2007 season before transferring to Missouri!

Maddy Stover’s mom was a gymnast! She says Penn State was her mom’s biggest rival. PSU was a powerhouse back in the day.

The answer to this question is yes:

Is the Utah mascot wearing a leo?????

Looks like we’ll start a touch late. Cheerleaders were just on the floor, Megan Marsden is doing an interview, and the screen is black! Those of you who watch a lot of Big Ten will find this familiar.

Ah, here we go, march in is happening.

Marsden telling us Reinstadtler will likely be in the AA for postseason, not earlier as they manage her body and keep her healthy.

Oh, friends, the Utah intro video is fun. This team knows how to do hype.

We’re hearing that Skinner has “upped her difficulty” which…!

Isa (Utah): FTY, some hip angle and a hop with staggered feet, but good amplitude.

Skinner (Utah): DTY, her usual and stuck. A touch cleaner than it can be, she’s cleaned up the second twist. 9.95, yep, just maybe a deep landing position for that .05.

Bonsall (PSU, exhibition): Maloney, some leg sep, Pak, nice! DLO, big step forward. She could factor in for sure.

PSU did much better here than in its exhibition meet a few weeks ago. No falls in January is a great start for this team. Utah looks very strong on vault; landings are much cleaner than many teams this early in the season. Some of the scores were maybe a tiny touch home score-y, being generous when it comes to hip angles, but it’s not by any means an absurd score for that rotation.

Bonsall (PSU): FTY, some low chest on the landing, and not the distance Utah was getting. Maybe a hop?

Tessen (Utah): She had mono in preseason, which is why we didn’t see her at the Red Rock Preview. Blind + Jaeger, some legs on the catch. Bail hand, shy of handstand. FTDB, stuck, very secure landing. Good start.

Garcia (PSU): YHalf, very piked. Something happened on the table, and she got almost no block, big step. I think that is new for her? Pretty sure she was previously an FTY girl.

My feed dropped! Will jump in as soon as it’s back.

Astarita (PSU): FTY, piked down and a big step back. Not huge height.

Chinnery (PSU): FTY, some hop back, but much better amplitude.

Reinstadtler (Utah): Blind + Jaeger, slight arm bend on the catch, great bail hand. Full-in, some hop. She’s so pretty through her legs and toes, as always.

LaGuardia (PSU): Hip angle on her FTY, big step back.

Bridgens (PSU): Y1.5! Wasn’t sure she’d do it. Not her best distance, lands deep and takes a big step back, but great to see that vault from Penn State.

Skinner (Utah): Ray, some bent arms on catch, bail hand. Toe on, FTDB, small step back. The Ray is new this year. This is the best she’s looked on bars in college, in my opinion, and having her last is a smart move by the Utes.

Utah’s bars was stronger than in the RRP! We’re at a fully hit meet so far (light some candles). Penn State had some rough vault moments and definitely didn’t show the amplitude that Utah did, so the scores feel accurate to me.

Randall (Utah): She’s so precise, with a great beam tempo. BHS Loso, solid. Beat + sheep, a better one! Switch + split. HUGE LOVELY Rulfova. Love love. RO 2/1 and a step. If the judges are being harsh, they could take a pause deduction before the dismount.

Waiting on a floor score. Wondering if McCracken’s bottom hit before her feet on the front, which would mean she didn’t have a combo pass. 8.45, yep.

Bonsall (PSU): Double tuck, good landing. Tour jete + split full, good, maybe a teeny bit shy on the split. Barani + front 1/1, little wild on the barani so the full bareeeeely stayed in, but she held it. Double pike, can’t pull it around, knees down. Just endurance, it seems.

Merrell-Giles (Utah): Switch + split, little check. Bhs loso loso, nothing to take on it. Front aerial, slightly off line, dropped one shoulder. SHE GREW THREE INCHES IN OFFSEASON WHAT. RO 3/2, some knees, but stuck. Good, again just small things. 9.9…I would go 9.85 but hey.

Lee (Utah): Her carriage is so excellent. Great shoulders, neck up, chest. Love. Bhs loso no pause at all into it, teeny balance check. Switch + beat + straddle 1/4, smart, added the beat because she had a small bobble after the switch. Beat + side aerial + 1/1, very nice. 9.675, yeah, hit on the leap series and pause.

Skinner (Utah): Her classic quick pace. Bhs loso, teeny bobble but covers it. Side aerial feet + split. I think she’s singing along to her music? Switch + straddle + back tuck, totally solid. Cheers for her U. RO double back, small hop. A good set.

Garcia (PSU): Double tuck good controlled landing. Performing well, as she always does. Double pike, another good landing, not super high. Switch side Popa, good. 3/2 front lay, nice ending. Good landings throughout. Good recovery from the early mistakes in the rotation. 9.825, feels a touch tight, but hit on amplitude, and judges knowing what is coming from Utah; you want more difficulty in your anchor when you’re up against a top 10.

Burch (Utah, exhibition): Apparently she’s vying for the leadoff spot! Bhs loso, clam and clean, small check. Cat + front aerial, slightly off but covers it into a beat jump. Split + straddle 1/4, gorgeous feet. Gainer full off the side. I’d guess we’ll see her in that leadoff at some point.

Well. The wheels came off a bit for PSU there. Some of it is endurance, I would guess some is nerves, but not the showing the Nittany Lions wanted. Utah has little nervy things on beam, which we expect in January. The Utes will refine those things throughout the season.

PSU had beam issues last year; it’ll be interesting to see how the team recovers from that floor performance on the event.

Garcia (PSU): Oooh in the leadoff, interesting. She can be inconsistent…hitch + switch side, good! Fun combo. Side aerial, breaks at the hips, a few tenths. Bhs loso, off in the air, and she falls. Uh oh. Sheep, not bad position. Gainer full, small hop.

Roberts (Utah): Front lay 3/2, really excellent body position. She’s very precise. Double pike, steps forward instead of back a touch, they may or may not take a tenth. 3/2 + front lay, very nice. That was great. 9.875, I’m not mad at that.

Bastardi (PSU): She has an almost lackadaisical way about her, and it works! Front aerial bhs, little wobbly. Front toss + beat, good. Switch + straddle, good split. She seems calm. Side aerial 1/1, was a bit off on the aerial, but saved it.

Reinstadtler (Utah): BJ Dass’ choreo is a little more refined and less bombastic than we’re used to from Utah, and I LOVE it, the gymnasts are performing it so well. Double tuck, very high. Switch ring, missed a connection? 3/2 + front lay. We’ll see if she adds a leap. Switch ring + split full, maybe that is the makeup. Double pike, nice landing.

Merrell-Giles (Utah): Really interesting opening choreo, pretty with her lines. Pike full-in, good landing, not her highest but by no means low. 3/2 punch lay punch pike, good, didn’t increase in amplitude but also didn’t lose it. Switch ring + tour jete half, good. FHS rudi + straddle, solid. That was very good. Not as explosive as she’ll be by April, but very nice.

Skinner (Utah): Double double, you know what this one looks like, her usual great landing. Tour jete 1/1, she was maybe a touch shy on rotation? 3/2 through to 2/1, very good. Punch front, orphaned, for the front tumbling requirement. Full-in, legs apart maybe in the air? Not sure, and not sure it’d get taken anyway, but just not quite as tight as it usually is. Overall, that’s the floor you expect from her, though.

Lee went 9.6, and I (and our announcers) aren’t sure why. I would guess a SV connection issue. Perhaps in those leaps.

Randall (Utah, exhibition): full-in, chest low and steps forward, didn’t really get the set she needed. Missed her leaps pondering Lee’s score. 3/2 to front lay, controlled. Double pike, low chest but just by a bit. With work on the full-in, she could be a factor.

Nice! For both teams. Utah was held back from a really huge score by little beam things. A few scores felt high, emphasis on few, and a couple could’ve gone higher. No complaints from me on the final score, this was absolutely a 197-level performance. Penn State recovered well on beam; this is a solid showing excepting floor. With that cleaned up, Penn State will be in a good position in the Big Ten.