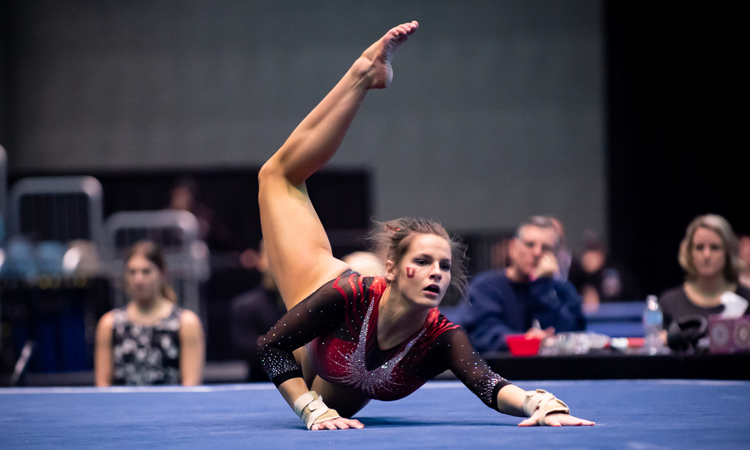 Whether you’re a fan of all-out expressive dance or balletic choreography, everyone will be able to agree that these 10 floor routines are some of the best of 2018. From Gracie Kramer’s finger-crawling choreo to Lanie Snyder’s hard rock routine, these were our favorite floors of the year.

I’m picking a rather obvious team but an under-the-radar gymnast from the team for my first favorite floor routine of the 2018 season. Kramer’s spunk really comes through, and the choreo is just so funky that it makes me want to watch this routine on repeat.

I had the pleasure of covering USAG nationals in person and got to see a lot of stellar floor routines from unsuspecting people. However, this one has stuck with me over the past eight months. Jordan’s grace, artistry and beautiful form sets her above the rest and really captures your attention and doesn’t let go until the last pose. Just look at the TWU fans in the back cheering for her too.

This set is fun from start to finish. When Snyder’s music started during the Big Ten championship, everyone in the arena took note. She exudes performance and joy in every moment of this routine, and it was always a pleasure to watch.

I’m struggling to find a 2018 video, but trust that Cooke was every bit as dynamic and graceful last season. From her set on the double tuck to her turn combination, this routine is gorgeous. I’ll even excuse the leap struggle in this video because the dance is that good. I can’t wait to watch Cooke in her senior season this year.

I’m not sure why I like this routine so much. The choreography definitely isn’t anything revolutionary, but there’s something so joyful about the way Hundley presents it and the music is just fabulous. (I’ll always be grateful to Jenny Rowland for swapping her Super Six lineup so this could be the soundtrack to UCLA finding out it won.) It’s not a groundbreaking pick, but it’s just freaking fun.

Aberger, who was a competitive dancer in her high school days, was a stalwart for the Owls across three events during her career but shone the most on floor. This routine has everything—from a team chant to fouette turns—and the presentation is so beautiful.

This is all about the double layout for me. Don’t get me wrong, the rest of the routine is great too—and Yanish is a compelling performer—but that body position on the double layout is what gets me every time.

I know it’s the same routine she had last year, but her long lines and elegant movement make this one of my favorite routines to watch, so I’m not complaining about getting it for an extra year. The slow, calm music is a nice break from the many pop/hip hop/upbeat songs in most NCAA teams’ lineups.

Hamline had an impressive floor lineup last year, but Cooper was a standout. She had a fantastic front pike through to double pike to open her set and closed with a double tuck. Plus, she has a front headspring in her choreography—it doesn’t get much better than that!

Reigning national floor champ Tali Twomey has one of the highest double backs I’ve ever seen. She just pops right off the floor—it’s super impressive. She also looks like she’s just loving life and having a blast whenever she steps out to compete, which I love to see!

There were so many great floor routines we couldn’t mention. What were your favorites? Let us know in the comments below!

READ THIS NEXT: The Most Anticipated Floor Routines of 2019