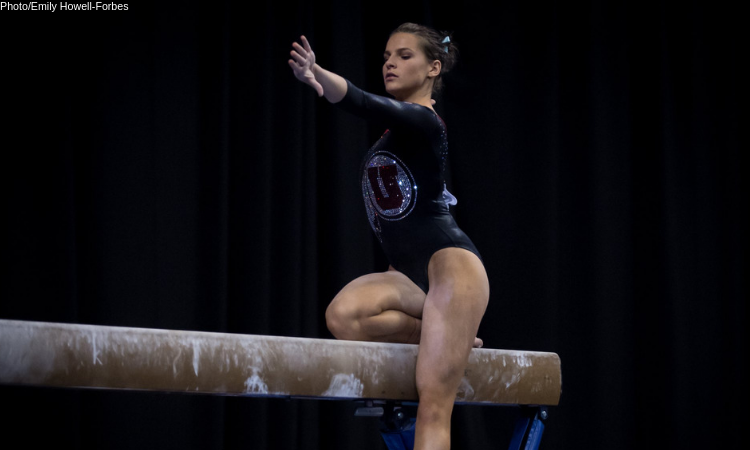 It’s that time of year again! Tonight we will get our first look at the 2019 Red Rocks! While the quantity of routines lost from 2018 is small, the graduated seniors left some big shoes to fill. How will the new freshman fit into the picture? Note that freshman Cammy Hall recently tore her achilles and will be out for the season.

Also in injury news, Missy Reinstadtler has a sprained ankle and will be limited tonight.

The Utes will go to vault, then bars, then they will alternate between beam and floor to close it out.

Isa VT – Another good y-full with a small hop back

Roberts VT – stuck y-full! Glad to see her back!

I guess six is all we’re going to see on vault. All could definitely factor into the lineup, but the last 4 were the most impressive. I’m guessing Tessen and Reinstadtler will factor in as well, if healthy.  Onto bars..

Dula UB – falls on jaeger. couple of short handstand, but the rest of the routine was solid. small step on landing. Apparently she’s recovering from mono, so endurance might be a struggle at this point

Well, this rotation is off to a rough start…

MMG UB – apparently upgraded, so let’s see how it goes. close on deltchev, upgraded dismount to a full in. A hit!

Skinner UB – huge tkachev, kinda college salutes out of that dismount, but solid as always. She changed her routine this year to add the same bar release.

Burch UB – good jaeger, solid routine, but not quite as big as the last few routines we’ve seen, but a viable option!

The rotation got off to a rough start, but they pulled it together in the end. I think there were several short handstands, but the TV angle is not good, so I’m not 100% sure. Right now, I’d go with Lee, MMG, Reinstatdler, Isa, Skinner, and Randall for the lineup.

Soloski BB – fron areal BHS seros – solid! small step on dismount. great leadoff! I could see her replacing Stover in that spot (not that we can ever really replace her 😉

Dula FX – good double pike to start. good back 1 1/2 to front layout. this choreography is fun! good double tuck to finish it off.

Both events look very good so far! No major errors from anyone.

Randall FX – good full in to start (spotted). good combo pass. solid double pike to end it (spotted). That could be a great routine this season!

Skinner FX – here we go! great double double as usual! Fun choreo again. Very nice second pass. can’t believe how many flips and twists she fits in! and nice full in to finish. Amazing as usual. I don’t think I can really say anything else!

The Red Rocks look very ready on beam and floor! No major mistakes on either event (aside from a major wobble on beam from Burch).

For beam, I think I would go with Soloski, Randall, Skinner, Lee, MMG, and Burch. For floor, I would go with Dula, MMG, Roberts, Randall, Lee, and Skinner at this point, but I also like Burch on that event, and I’m sure Reinstatdler will be in the lineup once she’s healthy.

The biggest surprise for me was Macey Robert’s routines on vault and floor! She looks to be back and ready to kill it this season!

READ THIS NEXT: Potential Lineups: Pac-12 Part I