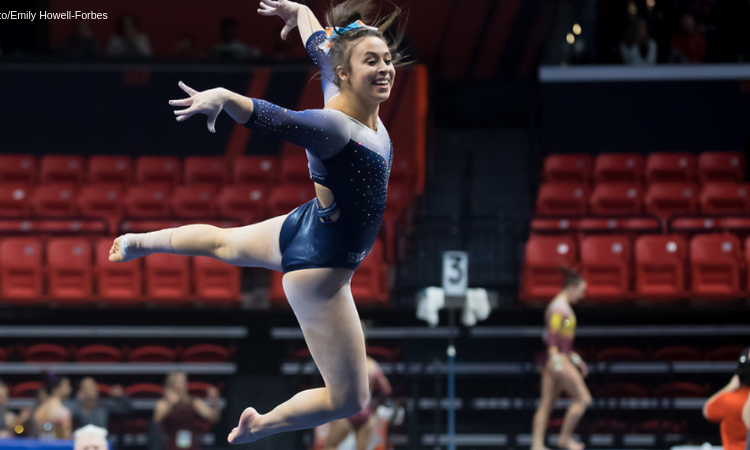 Every year, gymnastics fans anticipate the new skills and exciting routines that will be brought by freshman classes across the NCAA. The upperclassman gymnasts working alongside them, however, are often working just as hard to continue what they started. Some of these gymnasts may have faced a disappointment or setback in 2018, or they could have made strides toward doing something truly great but didn’t get to really show out. Either way, all of the gymnasts on this list should look at 2019 as a chance to build on the work they’ve already done.

Baddeley was a freshman standout for the Flames last season, with her huge Yurchenko full and beautiful beam form garnering the second-highest scores on those events for UIC for the entire 2018 season. She was also the MIC Newcomer of the Year. All this should set Baddeley up for another huge season in what could be the last one of the UIC program; if she does what she’s capable of, the three-event star could make a name for herself even outside the conference.

Illinois saw unprecedented success in 2019, in part thanks to the immediate all around impact of freshman Nicole Biondi. She competed all four events each week, starting from the beginning of the season, but also tended to consistently count a score in the low 9.7s as part of her program. As she enters her sophomore season, it would be great to see Biondi develop even more confidence; she has a lot to be proud of after 2018 and even higher all around scores could put her up there with the big names in the Big 10.

Menzione was the only Ball State gymnast to count an RQS on every event in 2018, which should show just how critical of a competitor she is for the Cardinals. She’s been building on her consistency since she first began at Ball State, and she even found more footing on her previously unsteady events (like posting a career high 9.800 on beam three times throughout the season). For her senior season, it would be great to see Menzione continue in all around success.

The freshman and former Peruvian elite competed beam and floor for the Cyclones in 2018 while intermittently appearing in the vault and bars lineups. Though her scores weren’t the highest on the latter two events, she has the foundation from her elite days to work up her consistency to augment the high scores she achieved on beam and floor. With several key vaults missing from last season’s lineup, she might fill enough holes to even compete the all around more consistently in her sophomore season.

Stanford’s freshman class last year made up a huge chunk of its lineups, but Rogers didn’t see competition time as much as her peers due to nagging ankle issues. She competed six bars routines for the Cardinal in 2018, only hitting one. That being said, Rogers was an accomplished all arounder in her J.O. days, and she’s been seen training hard in preseason with the goal of coming back strong. If she finds her consistency and puts the pieces together, Rogers could make an impact in 2019 on bars and potentially other events as well.

The former U.S. elite didn’t have the ideal start to her career at Georgia, suffering a preseason injury that prevented her from competing for the first start of 2018. However, when she did make her debut on bars and eventually added beam, it became clear that she can definitely live up to her original potential, and it will be great to watch that continue as she goes into 2019. She’s been training floor and competed one vault last season, so it would be great to see her confidence and preparedness rise to add those events and become an all around stud for the Gymdogs.