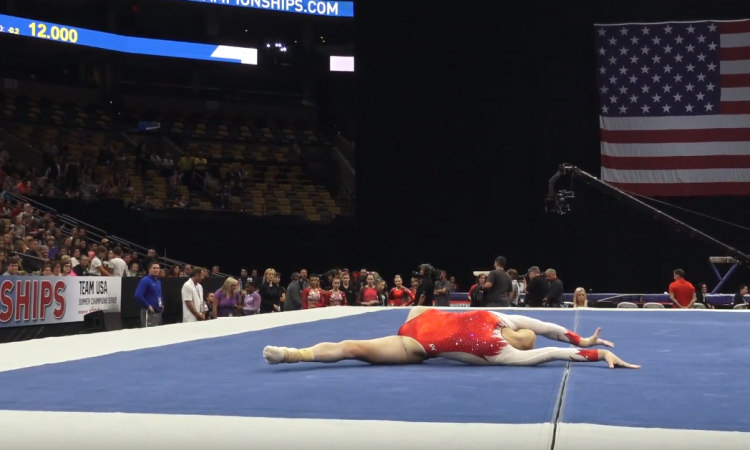 The first days of a new signing period often leave us with more questions than answers, and this year is no exception. Here are some teams we’re watching carefully in the coming weeks and months.

Arkansas likely still has a scholarship available of the two opening up, with one of its two commits described as a “scholarship commit” by her club and no word on the other. British elite Lucy Stanhope recently verbally committed to Arkansas, and while it’s uncertain what year she plans to move to Fayetteville, it’s possible that she will fill the gap in the class of 2019.

Alyona Shchennikova was one of a handful of elites who did not sign with the presumed intent of trying for the Olympics. While sole signee Gabby Wilson and presumed walk-on Abigail Gaies are strong recruits, if Shchennikova is in fact putting off her collegiate career, the Wolverines will want to fill the space.

We currently estimate that Oklahoma will only have 10 scholarships in use for the 2020 season after neither Ragan Smith nor Kaitlin DeGuzman signed. DeGuzman still might, though her social media doesn’t give many hints about her plans, while Smith is expected to wait a year to try for the Olympics.

Amanda Cashman was previously listed as a Utah commit, but she did not sign and no longer has links to the Utes on her social media. She seems to have visited at least two other programs, and the switch that now seems likely will be big news.

Maya Perez-Lugones, twin sister of Georgia freshman Alyssa, was recently announced as a verbal commit for the Aggies. It’s uncertain whether she will join for the 2019 season or finish her gap year and make her debut in 2020. She does not seem to have signed yet.

Washington signed only one, with verbal commit Ellie Bagley not participating in her gym’s signing day ceremony. It still has a scholarship to fill, and if there’s a new scholarship-worthy Husky in the works, it could make a big difference to the program’s depth.

These high-profile teams all signed more scholarship gymnasts than they will graduate in 2019. While they might have spots opening up from one-year scholarships that we didn’t know about, it’s also plausible that there will be some scholarships changing hands and maybe even medical retirements on those teams.

Watch our monthly Recruiting Roundups as more updates on next year’s freshman class come in!

READ THIS NEXT: What Surprised Us on Signing Day