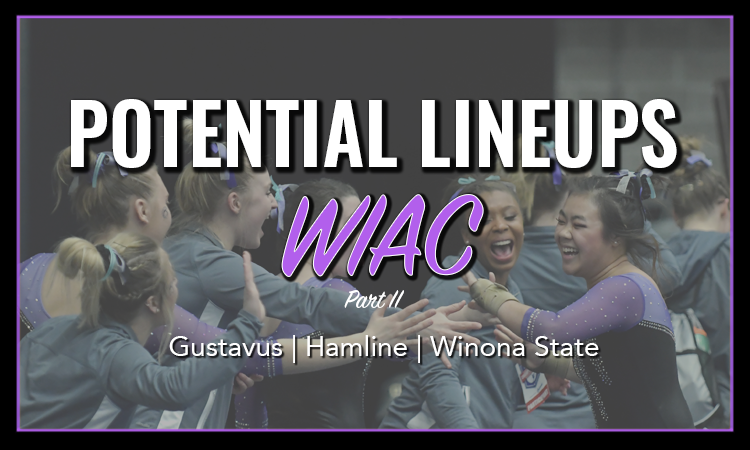 The second part of our WIAC potential lineups focuses on the three Minnesota teams. Traditionally led by Winona, we saw a shift in the rankings last year with Hamline coming out on top. Gustavus also proved it was a force to be reckoned with when the team finished fifth at the conference championship—right between Hamline, which was third, and Winona, which was sixth. All three of these teams have something to prove this year with the Pipers and Gusties hoping to show their incredible finishes weren’t flukes and the Warrior’s wanting to bounce back as Minnesota’s top DIII team.

Hamline qualifying to nationals was truly the highlight of DIII gymnastics last year. Vault and floor were consistently great events for the Pipers, but beam and bars really came together at the conference championship to put them in title contention with Whitewater and La Crosse and two full points ahead of the fourth place team. The team followed up with a record-breaking performance at nationals to finish fourth. However, with five major contributors having graduated, it could be tough to repeat the amazing season the team had last year.

The Pipers’ vault lineup was ever-changing last year, which allowed for many returners to get some experience. Caitlin Cooper’s Tsuk layout will remain a staple in the lineup. Others that could potentially join her are Meghan Webb with her big Yurchenko layout and Darby Slater with a handspring front. Both had the opportunity to compete at nationals last year. Freshman Nicole Johnsen is another that could see some lineup time with her solid Yurchenko layout.

Bars was one of Hamline’s weakest events in 2018, and with three of the team’s usual contributors graduating, this year will likely be similar. Lydia Ingram and Kelsey Renneklev lead the way with Ingram competing a unique twisting dismount and Renneklev a Gienger. However, both need to clean up form to boost their scores. Though it’s a weak event for the freshmen as well, there are two that could potentially break in with Johnsen competing a nice Jaeger and bail routine but has small form issues throughout. Carolina Schlawiedt is another new face we could see, with a clean giant half to bail combo and blind full + double back.

Beam was another one of Hamline’s weaker events, but the lineup hit when it counted. With three returners with RQS above a 9.000 and a few others with experience, the team should be in a good position here if it gains a bit more confidence and consistency. Freshmen Katie Viles and Johnsen are also in a position to be lineup contenders. Viles competes an aerial + roundoff series and Johnsen has a great side somi.

Floor was a stellar event for the Pipers last year. Like vault, their lineups changed quite frequently so there are only two returners who were regular members—but those two both have a massive RQS above 9.600. Four other veterans saw action—one of which competed at nationals—so the team should be in a solid position to build on the success it saw last year. Johnsen and Viles could also see some time out on the floor with Johnsen competing a nice double pike and Viles scoring big for her pretty front tumbling connections.

The Pipers are likely to have a solid and consistent year thanks to strong returning gymnasts as well as freshmen that are ready and capable of filling lineup spots. However, in a conference where every team is really stepping up its game, a weak bar rotation could hold the team back from repeating as national qualifiers.

After losing their star all arounder Eboni Jackson to an Achilles injury early in the season, Winona struggled to figure out a lineup that made up for her loss. However, it pulled it together at conference to finish sixth. This year looks like it will be one of rebuilding as it lost eight seniors and five additional team members but brought in nine freshmen. With such a young team, it will be critical to build confidence early in the season to fight for one of the top three spots at the conference championship.

Though vault was the Warrior’s lowest ranking event in 2018, they actually scored higher and more consistently here than their other events. Unfortunately, the team just did not have the difficulty to keep up with the higher ranked teams. This year, they could be looking to replace some of their lower scoring vaults with strong freshmen. Kaitlyn West and Hailey Bryant scored big in J.O. for their clean Yurchenko layouts, and Maya Fernando has a great handspring front. Watch for these three to swoop in and become consistent lineup members.

Katie Carling and Katie Pipp were big stars on this event throughout their years on the team, and making up for their loss will be no easy task. However, veterans Sunny Hasebe, Alexis Burton and Hannah Norman have shown great work in fall training videos, with Hasebe and Burton catching solid Jaegers and Norman with a pretty blind full + Pak combination. Freshmen Fernando, West and Bryant are all possibilities as well, along with classmate Hannah Matuszak, who has a beautiful double layout.

Many returning gymnasts saw action in the beam lineup last year, which should benefit the team greatly this season. Lone senior Natalie Koehler was a staple in the lineup her first two seasons, so watch for her to come back strong this year, as she has shown great work this preseason. West and Bryant could also get a chance to shine on beam as the former has a clean set that has scored as high as 9.400 in J.O. and the latter has unique skills, such as a back handspring + back tuck series and gainer pike off the end of the beam.

Floor is another event where many veterans got good experience last season—all of whom managed to score above a 9.200 at some point. Kennedy Utz and Leah Messelt will lead the way and are already ready for season, both having been featured as standout routines on the team’s Instagram this fall. Messelt in particular will be exciting to watch as she has upgraded to a whip + double pike opening pass. Though the Warrior veterans are fully capable of a great lineup, watch for freshmen West, Matuszak, Bryant and Sarah Fortuna to see some time in the top six or in exhibition.

Winona’s season will be interesting to watch with 13 members of the team being underclassmen. With Jackson’s departure, look for West to potentially fill the role of all arounder. Also watch for more of its freshmen to break into lineup or exhibition spots as they grow and become more confident in their gymnastics.

Talk about peaking at the right time! Throughout the season, Gustavus saw a steady progression in its scores, culminating in its highest mark of the season—and third highest in the team’s record books—at the conference championship. The score of 185.725 led it to a fifth place finish, the team’s highest finish since 2004. The Gusties lost four of the sets that helped in their exciting ending last year but have two very strong freshmen that could potentially compete all four. Watch for this team to build upon its amazing conference showing from 2018 and continue its rise in 2019.

Their strongest event in 2018, the Gustie’s return five gymnasts who saw a lot of lineup time. However, freshmen Brooke Merila and Sophie Redding come in poised to take over two lineup spots, both having competed big Yurchenko layouts. Redding in particular could be a star as the team recently featured a video of her working an extremely viable Yurchenko full in its Instagram story. Merila also has some training videos of Yurchenko fulls, so if the two come together, it could be a big boost to the lineup.

Two-time event qualifier Sam Ardy is the standout here with her beautiful Maloney, but fellow seniors Veronica Vasina and Amanda Malo are right there with her. Vasina competes a Jaeger to bail and Malo was seen working giant + hop change + Healy which is quite unique as well as difficult. Again, Redding and Merila are possible lineup options. Neither competed routines that were up to the level for college, but both have training videos of skills that could get them there, with Redding showing a big Tkachev and Merila a unique double full dismount.

An area of inconsistency last year, the Gusties will definitely need to focus on hitting strong, confident sets in 2019 as this could be a make or break event. They return four beam workers who saw a lot of action last year and two others who were in and out of the top six. So they have enough depth, but it now comes down to who can hit under pressure. All arounder Amanda Malo will almost certainly remain in the lineup, however Redding and Merila could take over two other spots, with Redding scoring as high as 9.425 in level 10 and Merila having an aerial + back handspring series and a pretty illusion turn.

Floor has the greatest depth this year with eight returners that shared time in the lineup last year and two freshmen who could make an appearance. Ardy is poised to become a consistent lineup member as she was recently seen training a difficult back two and a half. Merila will also be a key contributor, having scored as high as a 9.625 in level 9.

Gustavus is a team to watch this year. Like Oshkosh, it is a team on the rise with great new talent that the program should be able to build on. Pay attention to what it does about all arounders as it has two strong veterans in Ardy and Malo and now have two freshmen who could also compete all four events.

READ THIS NEXT: Potential Lineups: WIAC Part I