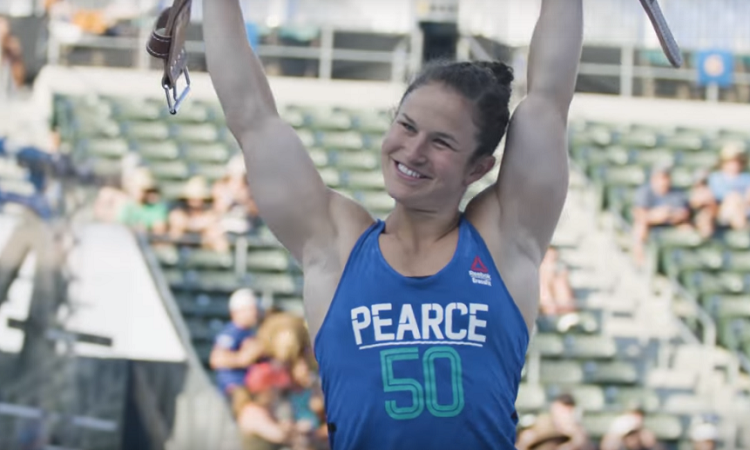 Kari Pearce was a member of the four-time Big Ten champion Michigan team from 2008 to 2011; the 2011 squad was the last Michigan team to qualify to the Super Six. Pearce was primarily a vaulter, though she saw time on floor and bars as well. She majored in movement science and became involved in CrossFit in 2014, qualifying to the CrossFit Games that year. Now a four-time CrossFit Games qualifier, Pearce is one of the world’s top athletes. She was ranked No. 2 female in the world after the Open in 2017 and was named 2018 Fittest American Woman. You can view all of Pearce’s CrossFit stats here.

Answers have been edited for length and/or clarity.

Kari Pearce: Transitioning from gymnastics to CrossFit was a mix of very tough and very easy. I was not used to long endurance type workouts. Also the weightlifting was difficult. I did a little right after college, but it is so technical that it takes time and patience to learn.

The bodyweight strength, body awareness, discipline and work ethic that I learned from gymnastics helped me become successful so quickly. Though I didn’t know how to do some of the higher-skilled movements, such as butterfly pull-ups or ring muscle ups, I was able to put my bodyweight strength with my body awareness and learn them quickly. My first regionals had two handstand events and I was able to win both. This really helped secure my trip to the CrossFit Games.

CGN: You spent some time after college in weightlifting, bodybuilding and powerlifting. What is it about CrossFit that made it stick when those other disciplines didn’t?

KP: For me, there wasn’t enough variety in any of those sports, and I got bored pretty quickly. The thing I love about CrossFit is there is always something new to learn and so many things to get better at. It reminds me of gymnastics because you can always work on learning a new, more difficult skill and perfect all of the ones you already have. I also love the feeling of being so fit in every aspect. I’m good at endurance, can lift a lot of weight and can do crazy things with my body.

CGN: How is a week of CrossFit training different than a week of gymnastics training? What does a normal workout look like for you now?

KP: CrossFit training is quite different from gymnastics training. There is a lot more variety. In gymnastics, you tend to practice the same movements over and over again because you must perfect them. Of course you do drills and other things, but a lot of the time is spent on the skills in your routine or learning new ones during the summer. The conditioning portion that we did is a lot like CrossFit but without weights. For gymnastics we would have four to five hour practices. Now I tend to split up my training into two sessions that are each about one and a half to two hours. They include a variety of weightlifting, mono-structural endurance work, gymnastics skills and Metcons [metabolic conditioning].

CGN: Nutrition is an important part of gymnastics and CrossFit, and the conversation around it has evolved a lot in the last decade. Has your nutrition changed much since you made the switch to CrossFit? What part does it play in your training now?

KP: I thought I knew how to eat healthy when I was doing gymnastics but had a lot to learn. I ate pretty healthy but also had a lot of processed food. You work out a lot though, so I was able to stay at a good weight for gymnastics. Now I am much more aware of what I put into my body and the timing of it. I work with RP Strength, which has made it a lot easier and I have learned a ton as well.

CGN: You’ve mentioned on Instagram that your body is healthier now than it was during gymnastics; can you elaborate? What do you do to prevent injuries and keep your body working the way it should?

KP: Yes, I am certainly healthier now. It’s a combination of the prehab exercises I do and just paying more attention to recovery. I see my doctor, Dr. Park, every week to make sure I get anything worked on that is causing me pain. I also think there is just less pounding on your body with CrossFit as compared to gymnastics.

CGN: What is your life like outside of the gym? How was the transition from Ann Arbor to New York?

KP: I like spending time in the parks in NYC, especially Riverside because it is quieter than Central Park. The transition was a crazy one, but that was to be expected. I loved Ann Arbor but was ready for a change. New York is where I found CrossFit, so it will always be a special place for me.

CGN: What advice do you have for gymnasts thinking about trying CrossFit?

KP: I think gymnasts should do CrossFit because it’s a great way to continue to be physically active. Also they already have the perfect foundation for it. As I said before, it reminds me of gymnastics because there is always something new to learn and perfect. Plus, you get to do it with a bunch of other people, which makes it so much fun!

CGN: What are your CrossFit goals for the future?

KP: My No. 1 CrossFit goal is to make it to the podium!