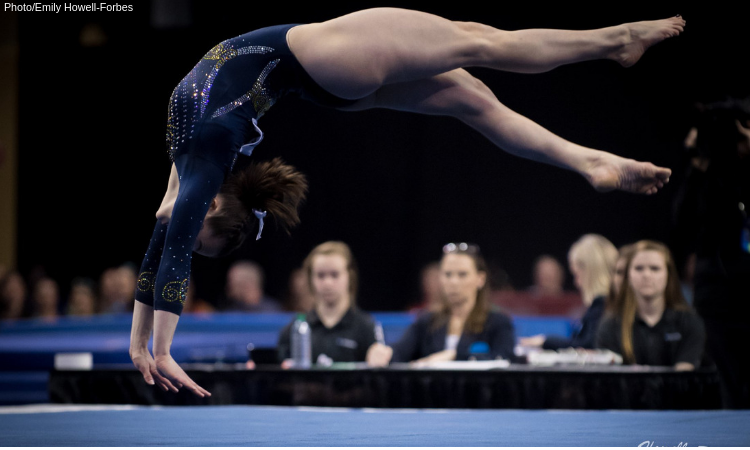 The 2018 season saw many teams improve their final ranking from past season. But no conference had more improvement than the EAGL, which saw its teams move up nearly eight spots in the final rankings on average. With some big superstars graduating, including 2018 national qualifiers Cami Drouin-Allaire (GW) and Morgan Lane (UNC), you might think the teams in this conference are in danger of dropping in 2019. However, every team is also returning a lot of talent. Here are six gymnasts who had a stellar 2018 season.

Haley Brechwald had a phenomenal freshman season, winning a conference record six Rookie of the Week honors and eventually EAGL Rookie of the Year. She also helped her team qualify to regionals for the first time since 2013. Brechwald competed all around every meet and was incredibly consistent—only scoring below a 9.700 six times all season. She’s strong on every event, but her standout is floor where she opens with a full-in and has a career high of 9.925. Look for Brechwald to help lead Pitt to new heights in 2019.

While Mary Elle Arduino usually competes in the all around, her stand out event is beam where she competes a triple series and boasts a school record 9.950. On this particular event, she’s only had two falls in her three years in NCAA—a rare feat. With the graduation of top all arounders Gabriella Yarussi and Tyra McKellar, expect Arduino to step up and become the new frontrunner for Towson. This combined with a talented freshman class should help the Tigers have a great 2019.

2018 was a disappointing year for the Tar Heels, just missing out on qualifying for regionals despite finishing an impressive sixth in the country on floor. A major factor in that sixth place finish was three-event star Khazia Hislop. Her tumbling and leaps are sky high, which allows her stick landings nearly every time. She has career highs of 9.925 on vault and beam and 9.950 on floor. Expect Hislop to continue to be a star for North Carolina, especially after the graduation of Morgan Lane.

While Chelsea Knight was the biggest all around star for N.C. State in 2018, the team’s success would not have happened without the supporting gymnasts as well. Drew Grantham was one of three regular all arounders for the Wolfpack and has career highs of 9.900 on floor and vault. On vault she competes a floaty Yurchenko full with great distance. Expect Grantham to step into the role Knight had and continue to be a dominant force in N.C. State’s lineup.

The huge senior class George Washington graduated in 2018 played a big role in the Colonials’ rise in the ranks over the last several seasons. While Alex Zois was technically a part of that class too, she is staying on for a fifth year. She competed all around for most of 2018 but was overshadowed by several of her teammates. Since so many of those teammates have graduated, expect Zois to be a major factor in the all around and help her team to not be left behind in this rebuilding year.

Last but certainly not least is Lauren Diggan of New Hampshire. As a freshman in 2018, Diggan made an immediate impact, competing on vault, bars and floor in nearly every meet and tallying career highs of 9.850, 9.925 and 9.900, respectively. She was also a five-time EAGL Rookie of the Week (which was tied for a conference record until Haley Brechwald broke it with a sixth win). The most impressive skills in her repertoire are a unique hop full on bars and a beautiful full-in on floor. She has also been seen training beam this offseason, so expect her to challenge for a lineup spot to complete her all around set.