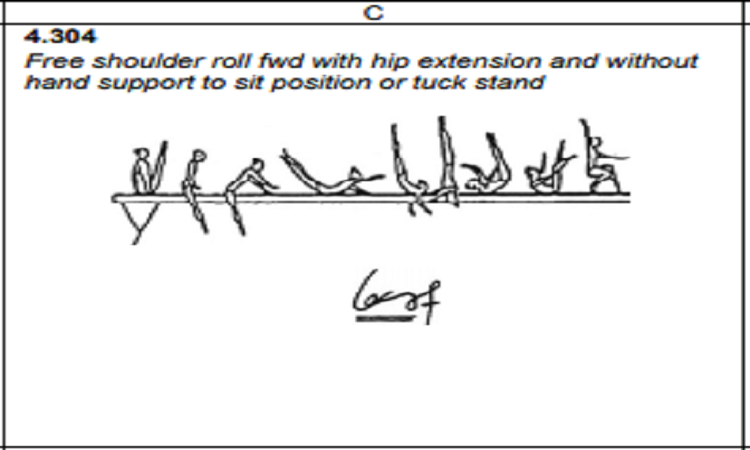 Gymnastics skills fade in and out of popularity often, especially as the code and equipment change. The 1980s were full of skills that have fallen out of use but are ripe for a comeback. Here are a handful we’re hoping to see more often.

We see these now and again, but deviations from the usual double salto are always refreshing. More, please! For reference, a double pike or double tuck dismount is also a C.

One of the most neglected of the single bar releases—in a class with Deltchevs, Shushunovas and Markelovs—a Comaneci salto can jazz up any bar set. While we’d like to see more of all four unique releases, the Comaneci is perhaps the most elusive. The most recent iteration came when Dani Barmore competed the skill for UW-La Crosse in 2016. Minnesota sophomore Lexy Ramler competed one in J.O., and Natalia Berruti, an uncommitted 2019, is training the skill, so we are holding out hope for its return.

Front twisting is enjoyable, but we’d love to see someone do an updated version of this pass. Front handspring front layout stepout front handspring rudi anyone?

Whip backs had a long reign as a common piece of the tumbling pass puzzle, but as difficulty increased, whips faded away. The whip half is a unique way to change direction, though, and could spice up combination passes.

Bars has changed drastically over the years, and as the set moved further apart, close circling skills were dropped in favor of giant-based skills. There remains an entire sub-section in the code for pike circles, though, with variations including releases as difficult as G and F. The Zucchold, a D, falls in this category, for example. Creative gymnasts could play with this section of the code to build some unique and difficult routines, even with the modern bar setup.

Handstand pirouettes have fallen out of style on beam and floor in favor of building non-acrobatic difficulty from turns and jumps, which are easier to connect for CV and take less time. Mounting the beam with a jump or press to handstand and full or one and a half pirouette is a C and would bring unique flair to a modern routine.

Rolls are another dance element category that has all but disappeared, but the skills remain a unique way to add non-acrobatic difficulty to a routine. So, Oklahoma, who is going to carry on Kelly Garrison’s shoulder roll legacy?

Since Yurchenkos have taken over the vaulting landscape, we’ve lost entire categories of vaults. While we see the stray Tsuks and handspring pike halfs, twisting handspring vaults have largely been forgotten. Handspring double fulls and above all start from a 10.0, as do many handspring full-on variations. The handspring full-on full-off (shown, 9.8 SV) is worth more than the Yurchenko layout (9.75 SV) that we see often outside of top tier teams. It is an intriguing category of vaults that we’d love to see explored.

READ THIS NEXT: GREG MARSDEN THROUGH THE AGES