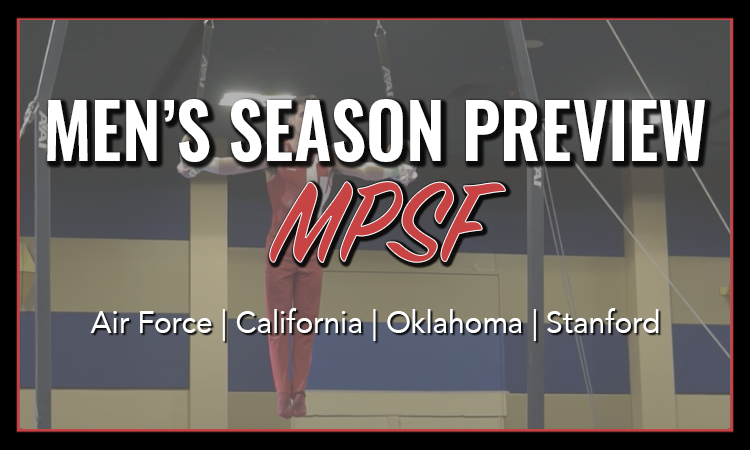 The Mountain Pacific Sports Federation (MPSF) is the smallest yet one of the strongest conferences in men’s gymnastics. Led by four time defending team champions Oklahoma, the MPSF has had all four teams qualify to the NCAA championships every year since 2012, a streak that can easily be extended into 2019.

Oklahoma has all the tools necessary to challenge for its fifth consecutive team championship and continue its undefeated streak another season. Stanford will be the top challenger from the MPSF to knock off the Sooners after finishing fourth at last year’s championship.

California and Air Force will have their sights on finishing in the top half of the conference this season. Air Force is losing only a handful of routines from last year and has a large freshman class to develop, and California will try to use its senior laden and experienced team to build upon its 10th place finish at the NCAA championships.

With a large freshman class and losing only three gymnasts from last year’s team, Air Force will be looking to challenge for a higher NCAA championships finish in 2019. Senior Jonah Urlaub is the team’s top returning all arounder and vaulter, and senior Lukas Texeira will help lead the team on rings, vault and high bar. The Falcons have finished as high as 10th over the past several seasons (2013, 2017), and if they can get a few competitive routines from their eight-member freshman class, the Falcons could potentially make a return to a similar position this season.

The loss of Yordan Aleksandrov, reigning MPSF high bar champion and Bulgarian international elite, will be tough for California, but thankfully it will have freshman Darren Wong to help soften the blow. Wong is an elite gymnast who recently represented Canada at the 2018 Senior Pan American Championships and has the potential to immediately replace the all around spot left open by the graduation of Aleksandrov. Aaron Mah, another Canadian elite, will also look to continue being a mainstay across all six and help the Golden Bears make moves up the rankings this season. After placing fifth at the NCAA championships in 2015, this experienced California squad will be looking to bounce back from its recent 10th and 12th place finishes.

The Sooners are the four time reigning NCAA team champions and haven’t lost a single meet during that four year championship run. This season should be another incredibly successful one with the loss of only four postseason routines from last year and the addition of a small but stellar freshman class. Freshman Spencer Goodell was a part of the U.S. team that won the gold medal at the 2018 Senior Pan American Championships and classmate Vitaliy Guimaraes won U.S. junior national titles in 2018 on floor and vault. Returning for Oklahoma is senior Yul Moldauer, reigning NCAA all around champion, 2018 U.S. World Championship team member and 2017 world bronze medalist on floor. Moldauer will be a standout all arounder once again this season, but also watch for senior Levi Anderson to be a big second six-event gymnast for the Sooners as well.

Stanford will have many routines to replace this season with the loss of its top two all arounders from last season in Robert Neff and Ryan Sheppard. Senior Grant Breckenridge, a regular in the rings, parallel bars and high bar lineups last season, has the ability to compete in the all around and may need to if Stanford hopes to improve or maintain its fourth place finish from last season. The Cardinal also has high hopes for freshman Ian Gunther, who could immediately make an impact in its pommel horse, parallel bars, rings and high bar lineups. Stanford is also getting Jacob Barrus back for a redshirt senior season, which will help the Cardinal maintain strong parallel bars and high bars lineups.