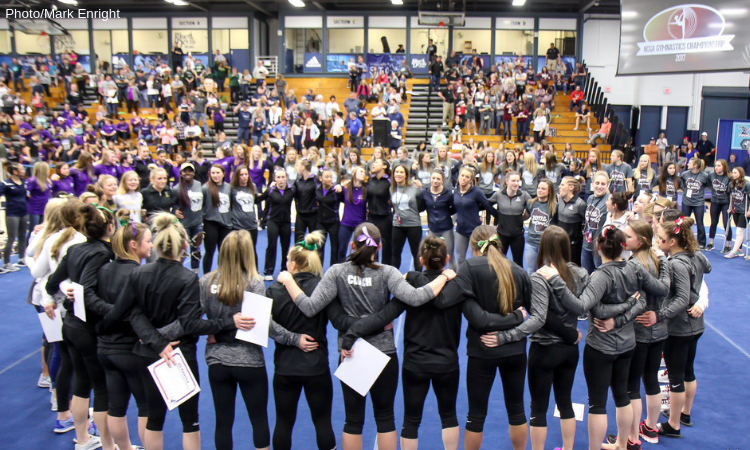 You know that shirt you have in your closet? The one that’s been hanging there in the corner for years. You know it’s there, but you tend to overlook it when getting ready to go out. You can’t exactly remember where it came from and you have other shirts that are a bit more glamorous, so you decide on one of those instead. Well DIII gymnastics is kind of like that shirt you’re picturing. Many people know it exists, but it tends to be somewhat hidden in the shadows of their flashier and more recognizable DI and DII counterparts.

Because of this, DIII gymnasts often encounter misperceptions about their ability, passion and overall experience as student-athletes. To showcase the reality of life as a DIII athlete, the following alums provided an inside look at their DIII journey and how it influenced their lives post-gymnastics:

Why did you choose to continue your gymnastics career at a DIII school versus pursuing another option (retirement, walk-on, etc.)?

Andrea Gross – HU: I started gymnastics when I was 11. By the time it was my senior year in high school, I was competing level 9/10 and felt like I was just making progress in the sport. I wasn’t ready to be done. Doug Byrnes made me feel so important when I came on my recruiting trip. And I needed to be in a city, so Hamline was the perfect choice.
Sam Sadler (Wiekamp) – UWL: The first year I was in college, I went to a university that didn’t even offer the sport, but then I was contacted by Utah State because of a video I had on YouTube. When I visited the college, I didn’t feel “at home.” However, I decided that I had been working too hard to come back to a sport I had tried to let go of. My coach and I both knew Kasey [Crawford], assistant coach at UWL at the time, so we decided to investigate that option.
Maddy Scozzie – Cortland: I looked at some DI schools, but ultimately I wanted to be able to compete a lot (instead of making the lineup on only one event) and have the chance to learn new skills. I also wanted to be able to focus equally on my degree as well as gymnastics.
Jen Sklenar – Brockport: I definitely wanted to continue gymnastics in college and pretty much had decided to walk on to a DI team. Then I visited Brockport for one of its meets to see what DIII was about. When I saw the energy in the gym, along with the amount of teamwork from both DIII teams, I knew DIII was the level of gymnastics I wanted to compete at.

Did your school have a rival? Who?

Eboni Jackson – WSU: UW-Eau Claire and UW-Stout
Sam Sadler (Wiekamp) – UWL: Our biggest rival was UW-Whitewater. It is an amazing team that pushed us to continue to work harder in the gym and great competitors who kept us on our toes whenever we were competing against them.
Jen Sklenar – Brockport: Yes, we always had a friendly rivalry with Cortland throughout my four years.

What was the most surprising thing about participating in DIII gymnastics to you?

Andrea Gross – HU: There were a couple eye openers for me when I started as a freshman. It was amazing to me how many non-student-athletes thought we were there on scholarship. Another is the fact that gymnastics gets the least support on campus. We are one of the only teams without a locker room, so we come to practice from class and put our gym bags, backpacks and grips on the low beam. We also have to pay for all of our own travel gear. I know friends at other schools with gymnastics programs as well, and we share similar stories.
Sam Sadler (Wiekamp) – UWL: Before coming to DIII gymnastics I always believed it was for those gymnasts who couldn’t make it in DI—almost as if it is a lesser program than DI. I quickly found out that really isn’t the case. The difference between the two comes in the mindset of the athlete. DIII athletes are going to school for their education first and their sport second.
Maddy Scozzie – Cortland: The most surprising thing for me about DIII gymnastics was its skill level. I didn’t realize that we would get to compete against DI and DII schools and that our routines would be competitive with higher divisions. I also didn’t realize how many more skills I would learn once I got to college.

What’s something you wish everyone realized or understood about DIII gymnastics?

Abby Clark – SC: Just because we are in DIII doesn’t mean we aren’t as competitive or talented. We love gymnastics just as much as everyone else; we just don’t get scholarships like DI and DII.
Allyse Dieringer – UWW: When someone pursues a college sport without external motivation, such as scholarship money and media fame, they are simply in it because they love it enough to sacrifice time away from academics and a social life. DIII athletes’ hearts are in the game 100 percent.
Andrea Gross – HU: Unlike some DI schools, most of us are working multiple part-time jobs, coming late to practice from labs and volunteering in the community. I had to work part-time jobs after practice and on weekends. Athletes do not get to pick their classes first at Hamline, so if we didn’t get a class that worked with our practice schedule, we would have to come late, leave early or miss the practice altogether.
Jen Sklenar – Brockport: Most people think we don’t do big skills, but we actually do the same big skills DI schools do, and multiple DIII schools have actually beaten DI/DII schools when competing against them.

How did your experience set you up for success in your career?

Abby Clark – SC: Understanding that hard work pays off and that the big goals are never out of reach, they just might take longer to achieve. I set a goal to compete in beam finals at nationals, so I worked really hard in and out of the gym and won beam in 2015. I not only reached my goal, but I surpassed it. Dream big!
Allyse Dieringer – UWW: You will never be happy with what you are doing unless it’s what you want spiritually. Salary isn’t everything—what makes your soul happy is. Gymnastics helped me realize that going for what you want is always worth it, no matter the sacrifices you may have to make.
Eboni Jackson – Winona: My experience being a part of DIII gymnastics helped me network. It also provided a motivating coaching staff and team with such amazing girls that pushed each other to be the best we could be not only in gymnastics but also academically.
Maddy Scozzie – Cortland: My DIII gymnastics experience taught me time management, organization, the ability to persevere and the importance of exercise in daily life. All of these things have helped me be successful in my teaching career, as well as keeping me balanced in other areas of my life.

What are you up to now?

Abby Clark – SC: I am currently living in New Jersey and working as a teaching assistant at a private special education school in Manhattan. I also started training ninja warrior almost two years ago and have competed on American Ninja Warrior in seasons 9 and 10!
Allyse Dieringer – UWW: Right now, I coach club gymnastics and refurbish furniture to sell.
Eboni Jackson – WSU: I’m pursuing my Master’s in Sports Administration at Western Kentucky University. I work with students on academic probation. I also help advise women’s basketball and work on game days with the football recruiting coordinator.
Maddy Scozzie – Cortland: This is my second year as a fourth grade teacher for Loudoun County Public Schools. I love my job!
Jen Sklenar – Brockport: I am working at Akron Children’s Hospital as a Registered Nurse.

Have you stayed involved in the sport in some capacity?

Abby Clark – SC: I coached gymnastics for about a year and a half after retiring. I still attend the Gymnastics Homeshow at Springfield College every fall, which is a really popular gymnastics exhibition show that the Springfield men’s and women’s teams put together each year. I still keep up with meet scores and recaps when season starts and try to get to a couple meets at Springfield!
Andrea Gross – HU: I am an assistant coach for the Osseo/Fridley high school gymnastics team. Our record at the end of the season is never winning, but our girls start off not having done gymnastics in their life, so it’s not unexpected. When they get a back handspring for the first time or stay on the beam at a meet, we get pretty pumped for them. I also still sub for coaches at Spirit Gymnastics (at Hamline) when they need extra help. It’s nice that I still live in Minneapolis because I can watch all the home meets.
Sam Sadler (Wiekamp) – UWL: When life slows down [since getting married and moving], I hope to get into judging and possibly start something of my own.
Jen Sklenar – Brockport: Yes! My sister, Jamie Sklenar, followed in my footsteps at Brockport. She is a sophomore on the gymnastics team, and I am her No. 1 fan. I attend as many meets as I can, and when I visit, I always try to flip around (and my body hates me for it).

What’s one thing you would tell gymnasts considering continuing their career at a DIII school?

Allyse Dieringer – UWW: Do it. DIII gymnastics has left my heart so happy with the sport. It will end your career on a good note and will make you fall in love with gymnastics all over again. DIII focuses on experiences and lessons to use for the rest of your life without the extra pressures of scholarship money and winning.
Eboni Jackson – WSU: DIII gymnastics is a great opportunity academically and physically. I was very blessed and honored to have been part of a team with amazing girls and in a conference with amazing talent.
Maddy Scozzie – Cortland: I would tell gymnasts looking into DIII that it is still very competitive and challenging, but you have more freedom without having to sign a DI “contract.” You can focus on school and gymnastics and enjoy the whole college experience. Also, the learning doesn’t stop once you get to college; you will be able (and probably expected) to continue learning new skills and improving your gymnastics all four years. It was the most fun four years of my life.
Jen Sklenar – Brockport: I would tell gymnasts considering DIII that it was the best decision I ever made. DIII gave me the opportunity to compete as a collegiate athlete, work with talented coaches, compete against very talented gymnasts and be a part of a team that felt like family. I was able to do all of this while being able to focus on and complete a nursing degree in four years. All the gymnasts are there because of the love they have for the sport, which is really evident at competitions and makes the atmosphere so much fun to be in!

READ THIS NEXT: Why You Should Care About DIII Gymnastics 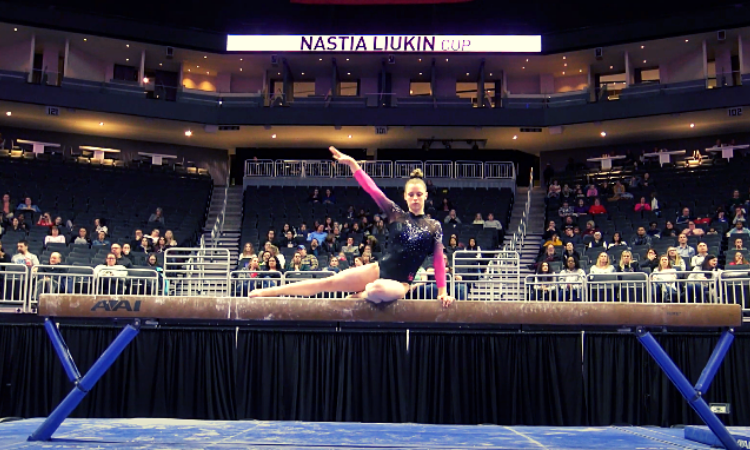 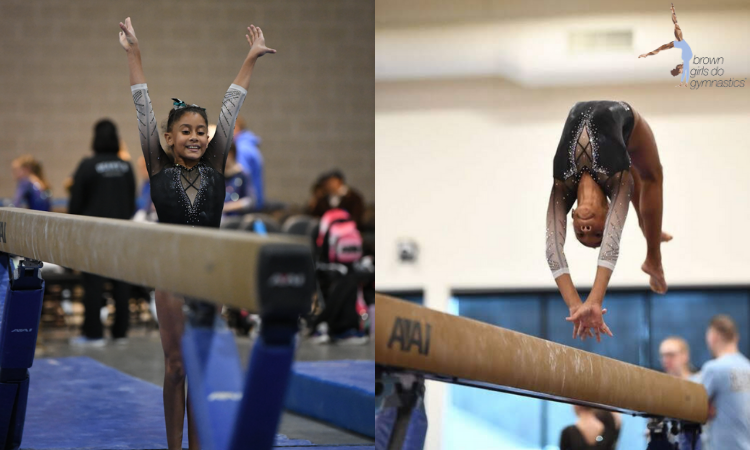