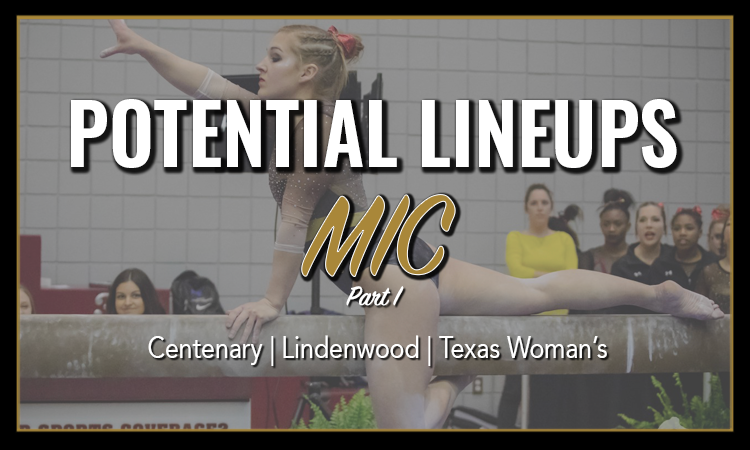 The MIC is a fascinating conference: it’s the only one in the country to have members from all three divisions, and all current members but one have picked up a conference title within the last decade. This week, we’re analyzing the prospects of the Division II and III members of the conference.

The potential lineups series is back to discuss teams’ prospects for the 2019 season. However, it has a bit of a new look: less body, more straight-forward analysis, yet all the same great information you’ve come to know and love.

Lindenwood is the four-time defending champion of the MIC, regularly defeating all of its Division I conferencemates. While the Lions lost two valuable gymnasts in 2018—including longtime star Kierstin Sokolowski—the pair contributed only four total routines, so with three strong freshmen incoming Lindenwood should be in good shape. This is a team that can break 196 on a strong day, and in 2019 it will have the luxury of depth on all four events.

The Lions lost only one vaulter in Sokolowski, and three newcomers are lineup-worthy. Nikki Baars competed a Yurchenko full reliably and Paige Sorensen has shown one intermittently. The new star, though, might be rising sophomore Aleah Turon — she missed 2018 after tearing her ACL, but her Yurchenko arabian was stellar in J.O. Other options include Ryan Henry, who vaulted regularly as a freshman, and Aleah Leman whose J.O. Yurchenko full was strong. We’ll also be watching how Breanna Franklin performs this year, after her 10.0 start handspring front pike half was inconsistent last year.

Bars is the event on which Lindenwood adds the least useful routines. Sorensen is the star of the newcomers: she competes a Ray and a beautiful bail in a bars set that would take little adjustment to be great in college. Baars shows technical promise, but she’ll need a bit of reworking to fit in here as her J.O. set was held back by a problematic Pak salto. Perpetually injured junior Georgina Harris comes from elite and has the skill variety to put together a good routine if she’s healthy. Jordan Boogerd is also an option—she was inconsistent in 2018, but her exceptional Deltchev has already made an appearance in training updates this preseason.

Beam is a perpetual strength for the Lions, and with five returners with RQS over 9.750 and at least three useful new routines, they shouldn’t have too much trouble here. Freshman Baars has great style on this event, while Hadley Roberts has a strong triple series that has already showed up in training. Sorensen might once again be the star of the bunch with very precise dance elements and scores over 9.50 in J.O. Sophomore Courtney Mitchell could also factor, having competed a few times in 2018.

Once again, the Lions have a wealth of options on floor. Baars boasts a front double twist, an E pass, while Sorensen has great performance quality and an equally impressive scoring potential in J.O. Turon’s consistency was a big asset on floor in J.O, so if she’s fully recovered in time for season she could also be a strong contender. Don’t look at returning scores and make the mistake of assuming that Leman will be easily bumped out with this influx of depth, though — she wasn’t consistent in freshman year, but she’s a very gifted floor gymnast and will be fighting for her spot.

Lindenwood is in a very strong position coming into 2019. Its biggest task through the first month or so of season will be working out which of its wealth of routines are the most consistent, and it’ll be hoping to find a few more potential 9.900+ routines to replace Sokolowski’s anchor sets. It’ll be interesting to see whether Henry steps back into the vault lineup to complete her all around four—and if not, whether Sorensen can come out strong in her freshman season and build up to an all around set.

It’s a transition year for the reigning USAG champions, with a six-member senior class departing Denton and being replaced by an incredibly talented, deep freshman group. It’s a challenge to predict frontrunners at this stage, but it will be very exciting to see who the Pioneers put up in January.

Vault might be the tightest event for the Pioneers in 2019, adding only a handful of very strong options. Dominika Bonzagni has scored the highest in J.O.—with a Yurchenko tuck full that she may have upgraded at some point to a layout— while Natalie Payne likely brings a Yurchenko full that has scored middlingly. Bria Northrop, a junior who was mostly restricted to bars in 2018, vaulted as a freshman and is a possibility here. Returners Hope Parkin and Hunter Vincent are also possibilities, though they haven’t scored at the level TWU would like in its lineup.

In 2018, bars was the event that could get the roughest in the front half of the lineup, so the Pioneers will be happy to return superstar Northrop as well as adding several potential top routines. Bonzagni has the highest scores, showing beautiful handstands and a great Jaeger. Mackenzie Balderas and Isabel Goyco have strong handstand instincts and could be useful in mid-lineup. A few other returners, like Megan Gentry and Abigail Versemann, will be necessary backups since the Pioneers don’t have incredible depth here.

Beam could be either excellent or very challenging for the Pioneers, with only two returners who competed enough to have an RQS, but numerous added options. Northrop has been strong in the past, with a career high of 9.875, but didn’t have time to settle in in 2018. She’ll be essential to stabilize this lineup since the rest is likely to be composed of underclassmen. Sophomore Paige Stuyniski was strong here in J.O., but she too was injured in 2018. Of the freshmen, the highest scorer is Ellie Ambs, who is an elegant and steady beamer with just a little leg form to clean up. Mackenzie Balderas and Payne have also picked up some good J.O. scores, and both have great form. Goyco stands out from the others with a little extra difficulty, including a switch half leap, and Bonzagni could be a backup option.

Once again, Northrop should be a factor here if she’s healthy enough, with a career high of 9.925. The Pioneers return a few good routines, but nothing that can deliver the ridiculous one-two punch of graduates Schyler Jones and Mallory Moredock at the end of TWU’s floor lineup. Once again, the Pioneers will lean heavily on the freshmen. Luckily, all seven have scored well here in J.O. Bonzagni and Sadie Bish are frontrunners here, with reliable tumbling and great landing sense. Goyco was a star in J.O. with a Sherlock floor routine, and Ambs has a great double front and a high scoring ceiling but was less consistent.

Expect some January fireworks from Texas Woman’s as it works out its lineups, but it certainly has the routines to keep pace with Lindenwood at the top of the conference and make a credible attempt to defend its USAG title. Junior Bria Northrop is a serious force and should replace graduate Schyler Jones in the all around and several anchor positions, but if her health doesn’t allow her to do so, the pressure on the freshman Pioneers could be immense in 2019.

Centenary is in a bit of a tight spot after losing numerous routines from 2018, as three rising juniors left the team in addition to two graduating seniors. However, several departing athletes seem to have stopped competing partway through last season (most likely due to injury) meaning that the team has already learned to live without their routines. The three freshman Ladies are strong competitors, but to keep their place as one of the foremost Division III programs they will need to find a few extra routines from returners as well.

Centenary isn’t in too tight a position on vault, with two only two vacant spots and most of the returners performing at a level that the team can count happily. The highest scoring newcomer by far is Dorothy Mims, who hasn’t competed yet in college but was a strong performer in J.O. The three freshmen, Kendall Knaps, Kendall Sanders and Xian Baumgartner, seem to have roughly equal Yurchenko layouts, with Knaps’ perhaps the strongest technically.

The Ladies have enough raw routines on bars, but would love to be able to replace at least one of the lower-scoring sets. Knaps is a strong candidate here, with solid handstands and a great dismount — she’ll just want to tidy up her bail to be real star. Baumgartner also has handstand potential and does a routine that features a true Shaposhnikova, always a happy surprise in NCAA.

Once again, all of the newcomers have potential on beam. Mims could be a superstar here if she materializes in 2018, with J.O. scores up to 9.500 and great difficulty. Baumgartner is steady and precise with solid leaps. Sanders has great presence and the best form of the bunch on her acrobatic series, while Knaps also has a strong scoring record but could be hit on leaps in college.

Floor shouldn’t be an issue for the Ladies, with six returners led by Navia Jordan’s fan favorite routine. Returner Aspen Hattley was also a great floor worker last season, with scores up to 9.500, and came just short of the routine numbers to get an RQS. Once again, Mims could be a star here if healthy, but if not, expect Sanders to be the leading newcomer with a gorgeous twisting set that could fit into the back half of the lineup.

Despite its losses from last season and a small freshman class, Centenary does have enough routines to compete at a similar level to 2018. Expect Jordan and Austin to continue to shine and to see some surprise new routines from returners to complement the newcomers.

READ THIS NEXT: POTENTIAL LINEUPS: MAC