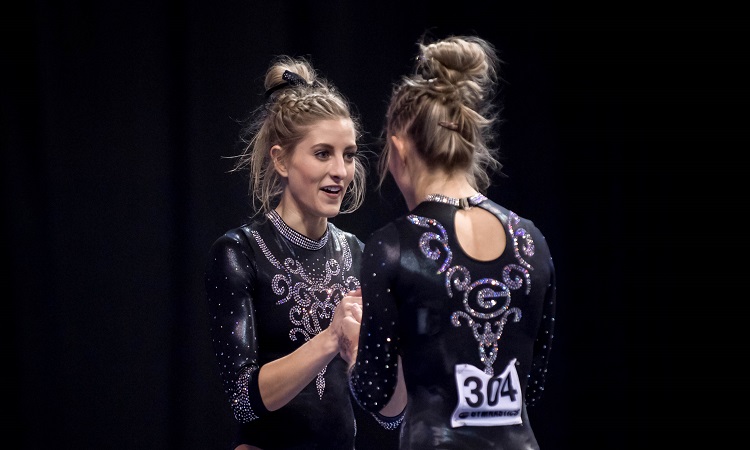 With 100 days to go until the 2019 college gymnastics season begins, there’s a lot we still don’t know, but we can guess some of the season’s major plot arcs. Here are 22 storylines we’ll be watching in 2019.

It’s been over a decade since anyone but Florida or Oklahoma has been able to score a 198 in January. Whether Florida can contend for this familiar honor will tell us a lot about the trajectory of its 2019. Could we see a new team shock us with early season dominance? If national champion UCLA is still the team we know and love, it’s not likely to reach this level so early, but a surging team like Michigan—which set the season record in Week 2 of 2018 and held it for several weeks further—could pull it off.

The UIC gymnastics teams are perched on the edge of demise. What will they accomplish in what may be their last season? The last time the women won the MIC title — 2013 — the championship was hosted at Centenary, where it will be again in 2019. The men are coming off of hosting the NCAA championship, and always host the Windy City Invite. What can the two squads put together for 2019? And, sad as it will be if we do lose both teams, there will be a flurry of transfers and changed commitments to keep an eye on.

SEC Freshman of the Year

As usual, the SEC is bringing in a high-octane group of former elites, but it often takes these athletes a while to adjust to collegiate competition. Will the likes of Trinity Thomas and Emily Gaskins dominate immediately, or will they be outpaced by top Level 10s like Amanda Elswick and Rachael Lukacs?

Will the OU Men Continue to Dominate?

Mark Williams has built a dynasty in Oklahoma, and he doesn’t seem to be slowing down. With the addition of Chris Brooks to the staff and Yul Moldauer’s continued presence on the roster, the Sooners seem untouchable. Stanford is always a threat, though, and two Big Ten teams — Minnesota  and Illinois — came within four points of toppling Oklahoma’s reign in 2018. Is 2019 the year we will see a new men’s victor crowned, or will Williams’ squad hoist another championship trophy in April?

All Star Freshman Classes for Michigan and Georgia

As two teams impacted greatly by injuries last year, Michigan and Georgia bring in arguably the best freshman classes this year. Will the massively talented and accomplished cohorts save the day, or struggle under the pressure of their programs’ dependence?

2018 saw the Ithaca College Bombers finally capitalize on their talented roster to set a slew of program records and qualify to NCGA Nationals. Can they carry this momentum into 2019, or will inconsistency drag them back down? Gustavus Adolphus is perpetually ranked on the low end of the division, but after a breakout performance at regionals last year it could be poised to build in 2019. Meanwhile, eternal bubble team UW-Eau Claire returns many of its essential routines and has brought on young alumna Danielle Schulzetenberg as head coach. She might bring new ideas that could help the Blugolds break into the top three in the WIAC.

More gymnasts than ever are electing to graduate high school a year early to fill open scholarship spots, including Bailey Ferrer at LSU, Brenna Brooks at Washington, Rachel Baumann at Georgia, Donna Howell at Penn State and Bailey Lovett at Arkansas. Will these athletes perform straight away, or will there be an adjustment period, particularly for those who can’t move to campus until January? Who will their teams recruit in the last months to fill the vacated spots in 2020?

Revenge for Florida with Elite Freshmen

Florida was a popular preseason pick for the national title in 2018 but seemed wrongfooted from the first week, with Kennedy Baker’s career-ending Achilles injury only exacerbating the problems of a team that looked unsteady more often than not despite a fairly solid ranking. The Gators lost numerous critical routines, but with a strong freshman class that includes three former elites, can they recover their mental game and return to the very top?

We know there will be a heartfelt Deanna Hong video. We know everyone will cry at senior night. We suspect the team will dedicate the season to her. What else will Miss Val’s last year bring? Another title? A full face paint floor routine? A sold-out Pauley for each home meet? Now it feels especially cruel that Pac-12s were moved. Plus, to whom will she hand the reins after the season ends?

Boise State has missed numerous opportunities to qualify to nationals in recent years, and its freshman class is strong but not game changing. Meanwhile, conferencemates Brigham Young and Southern Utah have brought on massive freshman cohorts and seem poised to explode in 2019. Can Boise State hold on, or will the MRGC conference title change hands this year?

Continued Battle for Supremacy in MPSF

San Jose State has snagged the MPSF conference title the last two years after being consistently outranked by UC Davis during the regular season. Will SJSU continue conference title dominance, or can UC Davis break through? Will a new head coach give the Spartans the consistency they need to challenge UC Davis in the end of season rankings?

Changing of the Guard at George Washington

George Washington’s 2018 senior cohort defined the team. With thirteen postseason routines gone, the talented freshman class will have its work cut out to compensate for the losses. The young team has enough talent to stay afloat, but how ready will it be in January?

This year is the first for the new postseason format which features longer weekends, fewer teams, and a more television and viewer friendly format. Will the new format for Regionals be amazing, exhausting or both? Which teams that typically qualify to nationals will miss out this year?

Rise of the Ivy League

The four Ivy League women’s programs are on a strong upward trajectory, with Yale setting a new Ivy League record and Cornell passing its program record in 2018. With strong freshman classes all around, especially for Yale and Penn, how far can the Ivies climb up the national rankings—and can Yale pass Lindenwood and Texas Woman’s to win the USAG national title?

The Arizona State men’s team announced that the roster is 58 members strong for 2019, including a whopping 25 freshmen. Massive men’s teams seem like a new reality, as collegiate opportunities dwindle and men looking to compete are funnelled into fewer and fewer programs. How many of those 58 men will see competition time in 2019? And can ASU continue to dominate the club field, and even top Division I programs? The Sun Devils finished 2018 at No. 14, ahead of DI’s like UIC, Army and Springfield.

For the last few years, the MIC and USAG titles have been a tussle between Lindenwood and TWU. Will other teams in MIC or USAG rise to challenge them or will their rivalry continue to define the fields? Which will ultimately land on top in 2019? And which team will hit the 196 mark first this year?

Last year’s new trend was ombre sleeves. What will the big look be in 2019? What wildly original designs will Oklahoma dream up? And is UCLA really switching to Under Armour, or will Rebecca’s Mom stick around for Miss Val’s swan song?

A New Era at Cal

Despite Toni-Ann Williams sticking around, the 2019 Bears feel like a very different team than what we’ve seen before as the Howells’ top-tier recruiting begins to manifest in real gymnastics. Cal showed its competitive ability in the second half of 2018, and if its sophomores are healthy and settled and its freshman are up to the challenge, it could find itself at the very top this year.

The three teams ranked lowest in Division I in 2018—SEMO, Illinois State and Alaska—all bring on strong freshman classes in 2019, with Alaska in particular also recovering several athletes from season-ending injuries in 2018. Can they rise up the rankings, and if so, who will take their places at the bottom?

The Windy City Invite has been a staple of the men’s NCAA calendar for years. Hosted annually by UIC in conjunction with a J.O. invite, the meet happens early in January and kicks off many teams’ seasons. The competition is usually attended by a number of Big Ten teams, along with UIC. Since the future of UIC gymnastics is up in the air, this may be the last NCAA competition at Windy City. Who will take what may be the final title?

With the much-discussed new postseason format comes an all-new way for individual gymnasts to progress through postseason. Individual gymnasts no longer need to win an event at regionals to qualify; the highest-scoring individual on a non-qualifying team will find herself headed to the big dance. Will it enable more gymnasts from lower-ranked teams to progress? Which surprising faces will we see in Fort Worth in 2019?

A high volume of offseason coaching changes seems to be the new normal in NCAA gymnastics, and this year’s crop of new head coaches is poised to make an immediate impact. SEMO alumna Ashley Lawson returns home after coaching Lindenwood’s standout beam group in 2018 and could be the face of the Redhawks’ resurgence. Recruiting powerhouse Umme Salim-Beasley is a great hire for talented but recently underperforming Rutgers: over her three years as the head coach at Temple, the team’s final RQS improved by over four points. Former Washington head coach Joanne Bowers returns to the NCAA as head coach at San Jose State and immediately snagged two rising star assistant coaches, while hotshot Josh Nilson took the vacancy at Temple. Division III has also been active, with Ursinus, Cortland and UW-Eau Claire all picking up young talented head coaches.

READ THIS NEXT: 7 EXCITING DIII ROUTINES TO WATCH FOR IN 2019