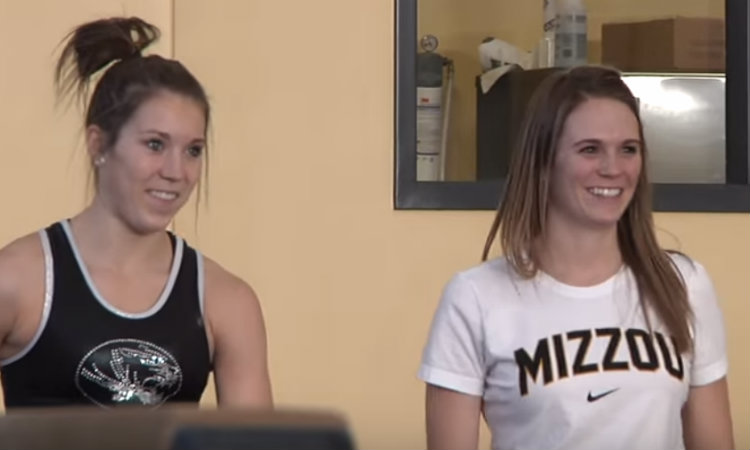 Casey Jo MacPherson, formerly Magee, was a member of the Arkansas Razorbacks from 2007 to 2010. She was an all around competitor throughout her career and to this day holds many of the highest scores in Arkansas history. She was the first Razorback to earn first team All-SEC honors and earned eight total All-American honors during her career. MacPherson was part of three Arkansas squads that qualified to nationals, including one Super Six appearance. After her college career, she then pursued elite gymnastics and even qualified to the 2011 Visa championships. She’s now in her sixth season as the assistant women’s gymnastics coach at Missouri, focusing mostly on beam and floor. In 2018, she coached the Tigers to a No. 20 finish, which included the team’s second-best beam score in program history.

College Gym News: It’s been eight years since you left Arkansas, and you’re now an assistant coach at Missouri. Can you give us a snapshot of what your life is like now?

Casey Jo MacPherson: My life basically revolves around coaching. Gymnastics is just a 24/7 year-round sport, so I go recruiting and we have open gyms during the summer since it’s voluntary right now. Actually, our whole team takes summer classes so a lot of them are around, so we get to spend a little bit of time with them. Other than that, summers are nice because it’s a little more laid back, but I definitely still have work and recruiting and trips. I love my job; I love the program that I’m working with and the staff that I work with. Our team is a lot of fun, so it doesn’t feel like work every day, and I know I’m fortunate in that sense. So even though my life revolves around it, I really enjoy it.

CGN: And what about your personal life?

CJM: My husband and I met at Arkansas; he was on the cross-country and track team there, and then he joined an elite running team down in Austin, Texas, after he graduated. He was down there about six months after I graduated, and then that’s when I started coaching at Western Michigan. We did the long-distance thing for a little while, but we’re coming up on our fourth anniversary of being married. And then our dog is not quite two years old. We got him about a year and a half ago, and he’s been a blast. His name is Boswell, but we call him for Bos for short. He’s got a funny personality and likes to be active, so we take him on runs and mountain biking. He loves playing fetch and going to the dog park. We just recently bought a house next to a trail that goes through town, and it’s next to a dog park so that’s been a lot of fun for him. My gymnasts love him. They’re always asking, “When do we get to see Bos? Are you going to bring him by the gym?” So every once in a while, my husband will bring me lunch or just stop by with him.

CGN: What was it like for you competing elite after finishing college instead of the other way around like most gymnasts do?

CJM: It was tough! It was definitely a challenge, which is why I did it. I finished my senior year at Arkansas, and I was fortunate that my body was still healthy and I didn’t have any major injuries. I was still learning, loving to learn new skills and continuing to get better, so I thought, “Why not just keep going and give it a try?” I knew it was going to be tough, but one of the hardest things about the elite world is that it can be pretty serious. I had just come out of the college environment, which is just so fun. You’re doing it with your team, for your team and the pressure is different. I felt like I thrived in the college environment with the pressure of not wanting to let my teammates down, but with elite, it was just for myself; it was a different sense of purpose. Not having that drive there to do it for teammates made it a little bit harder. And the level of difficulty is way harder, so it was hard to push myself to do that every day.

CJM: It was just because I was still learning, healthy and loving gymnastics that I thought, “OK, what can I do now?” I didn’t really want to go back to level 10 and the J.O. world because I had done that before. And when I was a kid, my club coach wanted one of my teammates and me to do elite, but at the time, I really didn’t want to train on my own and do two-a-days. My teammate said no right away, and I really didn’t want to do it by myself, so I said no. But after college, I just thought, “If I want to keep training and I don’t really want to do J.O. because I don’t think that would be as much of a challenge, why not just try elite? I know it’s going to be hard, but let’s give it a go and see what happens.” Then I’d never have to feel like I didn’t know how it would go; I wouldn’t have that “what if.”

CGN: In college and elite, you were known for your unique, out-of-the-box skill set. When you go on recruiting trips, do you find yourself gravitating toward gymnasts with similarly unique skills, or is it just coincidence that so many Missouri gymnasts are also pushing the envelope?

CJM: It’s probably a little bit of both! Some of the unique skills I did were more of me finding something easier for me to do, like I did roundoff series on beam because my back handsprings just weren’t very good. I think some of those things just happened naturally to a degree, rather than trying to be different. Of course when I’m recruiting, it’s fun to see gymnasts that are doing something different because we do see a lot of the same skills in college. But it also has to have that balance of proficiency, consistency and cleanliness. We tell recruits we want them to come in and continue to grow and get better throughout their college career, not just stay the same or even water down when they get here. That was the same experience I had at Arkansas. Also, I’m a sucker for beautiful gymnastics, so even though I didn’t do a back handspring layout or a handspring lay lay on beam, if somebody can do that really well, I’m all for it. Really, it’s just what works for that gymnast.

CGN: Do you find it odd coaching a team that competes against your alma mater every year?

CJM: The first year with Mizzou was tough, especially when we went to Arkansas. It was really bizarre walking into Barnhill and going to the visitors’ locker room. I hadn’t even been in the visitors’ locker room before! It was like, “I don’t really know where we’re going, let’s just follow the person directing us.” Overall, you want your alma mater to do well and to be successful, and I was really happy for them that they made it back to nationals this year. But at the same time, I want my own program that I’m coaching now to do well. I’m super competitive in the sense of wanting to be a good coach, so I want that to come to life through the gymnasts I coach and also to show my former coaches I’m doing a good job.” It’s a weird kind of battle. That was a big part of my life, and I got there when the program was still really young. It was cool for me to be a part of the program growing and making Super Six for the first time. Of course, you want that to continue to happen for a program you were a part of, but at the same time, I still want to beat them when we compete against them.

CGN: There’s this trend developing in college gymnastics right now highlighting the success of young female coaches, both in competitive results and athlete health and happiness. As a young female coach yourself, what do you think empowers you to connect with your athletes on a different level than anyone else?

CJM: I think back to when I was an athlete, especially in college and how much I grew as an individual. I started to thrive as I got older and matured a lot, grew up and became independent and determined. I gained so much from that experience, and that’s one of the things that I love… My favorite thing about coaching college is getting to be a part of that growth of these women, from when they come in as freshmen to when they graduate. It’s amazing to see that growth and that change and get to be a part of it. My first couple years when I was coaching, I wanted to be that positive female for them, but I think I was also trying to navigate the technical side of coaching. I didn’t have a ton of experience coaching club, so it was more a matter of getting to know myself as a coach. But nowadays I have a really good handle on both. I can be a strong coach but also be there for them as the female coach to come to, to understand what they’re going through, to be that—I don’t know if role model is the right word—but that female leader in their lives.

CGN: Do you have any aspirations for your future career? Do you see yourself maybe becoming a head coach someday?

CJM: I do, yeah! That’s definitely something I want to do. I would love to be a head coach, and down the road maybe win national championships. But at the same time, there’s always things I can learn. I feel like I grow every year; I feel like I grow every day! I’m always learning something new, I’m getting better at this and I’m constantly growing and evolving as a coach. I’m not necessarily applying for every head coaching job that opens up this moment, but it is something that I see myself going after in the future. I don’t have an exact timeline; if something comes along that I feel is the right move for me, I’ll go after it, but it’s not like I’m dying to do it right this moment.

CGN: What would you say to the current graduating class of NCAA gymnasts as they go out into the world?

CJM: Go after what you want, and if you don’t know exactly what that is, that’s OK too. It might take some time to navigate your life and what direction you want to go in, and it’s going to be weird for a while not doing gymnastics anymore. That’s such a huge part of your life that it’s weird when all of a sudden, it’s done and it’s over. You’re starting a new chapter, and it’s so many emotions: exciting, nerve-wracking and sad in a sense. Just take it in stride, and stay positive.

READ THIS NEXT: Where Are They Now: Emily Vidmar Day