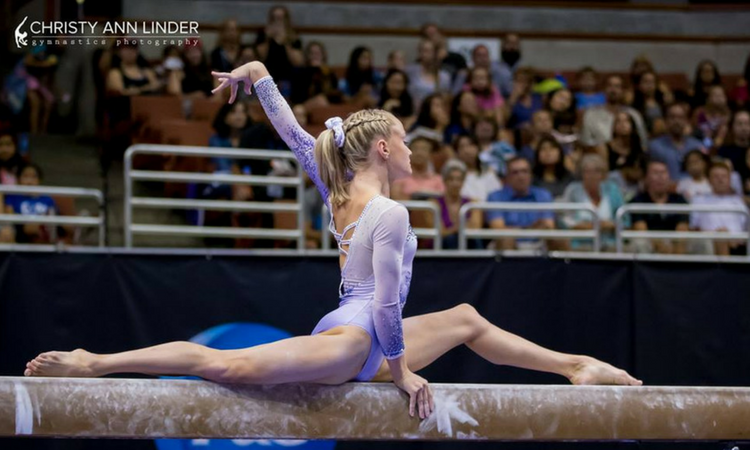 Twenty six future collegiate gymnasts competed at the 2018 GK U.S. Classic in Columbus this weekend, including commits of 13 different collegiate programs. There’s little debate which team’s commits had the best meet. Florida had three future Gators in the top five in the senior division, as well as a total of 10 top-five event finishes. Read on to see how commits of other top programs fared in Columbus!

Adams had a mixed day, crashing her attempted Yurchenko double and hopping out of bounds on floor, but she showed one of the meet’s tidiest bars routines. Her future classmate, Blanco, had some small landing adjustments on floor but showcased her trademark style and precision across four events; it’s difficult to imagine her not becoming a star in Tuscaloosa.

Hollingsworth had some technical challenges and a fall on a tuck full on beam but showed a lot of potential, especially on floor where she tumbles an outstanding open tuck full-in. Lee continued to shine as one of the country’s top juniors, ranking in the top five and beating many senior scores even with reduced difficulty—including doing timers for her second pass on floor and beam dismount. With her full set, a national junior title is possible for the future Tiger.

Williams is quickly becoming a fan favorite, with beautiful dance and technique, as well as a difficult bars set. A small issue on bars held her back from the huge scores she’s received earlier this year, but it shouldn’t be a problem by nationals.

Mabanta’s bars weren’t quite at elite standard for this meet, and with two falls and a stamina issue, her all around score suffered. But the technical ability of a future NCAA star was obvious across all four events.

Florida was the uncontested “champion” of this meet, with its seniors going 2-3-4 in the all around. McCusker shone on bars and beam to finish easily in second, showing confidence we haven’t seen from her in several years and putting herself firmly in the worlds conversation. Hurd also had a strong day, suffering a fall on beam but also showing some exciting upgrades and one of her strongest vaults to date. Jones put up one of the strongest vaults of the day to finish fourth and remain a quiet threat while Sloane Blakely had an incredible beam routine that included a gorgeous front series.

Hahn performed strong routines in Columbus, with her main downfall being lower difficulty compared to some of the top juniors in the field. With more time to increase her D-score, she could become more of a treat in the all around, showing a solid base here.

While LSU’s Dunne only competed bars and plans to petition to nationals, its juniors showed great potential including a beautiful beam routine from Finnegan and a clean bars set from Tatum. The latter in particular remains one of the nation’s top juniors in the all around, with a score that beat numerous seniors.

Shchennikova’s trademark continues to be her bars, where she’s competing an incredibly ambitious 6.2 (the most difficult set in the country) and continues to tidy her form. She also competed a Yurchenko double and another fall-free beam routine.

Ragan Smith is already qualified to nationals, so she was able to sit out floor after a fall on bars and an outstanding beam routine. Davis had a great day after a slightly rocky American Classic, showing off her style, especially on bars. The always theatrical Bowers had an atypical floor routine in the junior session, with a near-fall and an actual fall on two of her passes but was strong on her other three.

While we couldn’t track down Carey’s individual vault scores, suffice to say she’s as strong as ever on her favored event despite changing her Kasamatsu to a Yurchenko half-on entry. While she had a fall on bars, she stood out on floor where showcased a new Moors and typically almost overpowering her other difficult passes.

Johnston’s Yurchenko 1.5 will be an incredible weapon in college, and it served her well in Columbus, too. She also had clean routines on bars and floor, but unfortunately a fall on beam.

Jordan Chiles remains a vault superpower, “only” competing a Yurchenko double at this meet but executing it near-perfectly. On beam, she competed a normal double wolf with no connected Okino and stumbled on her dismount, but she was strong on floor. Malabuyo competed only two events with the intention of petitioning to nationals, and while she had an error in her ambitious beam routine, she was strong on vault.

Gilstrap achieved one of the day’s highest execution scores on floor with beautifully controlled landings and stood out on beam with precise performance of a simpler routine. Soza wowed with her execution and toe point as usual, held back only by a fall on beam, and McCallum struggled on vault and bars to put up a lower all around score than we saw from her earlier in the year. 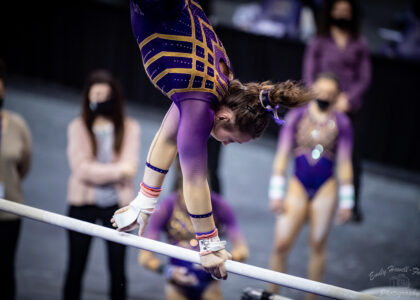 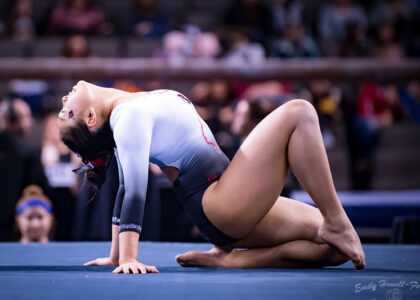 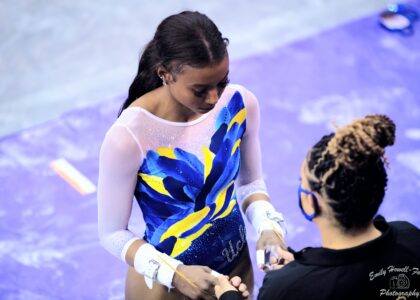