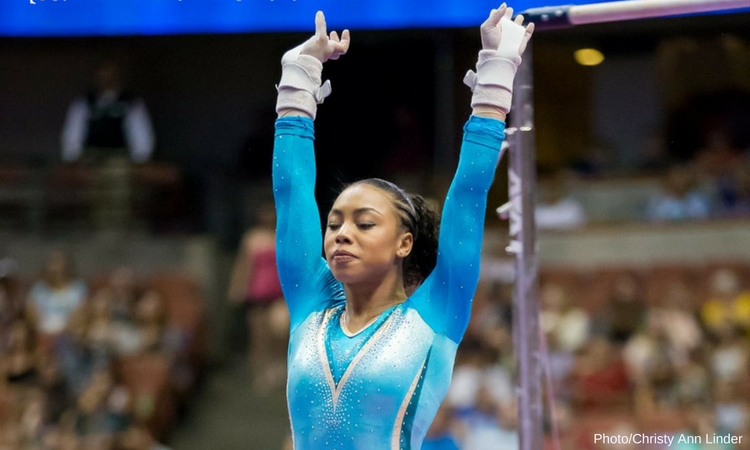 Bars is often a strong event for elites joining the NCAA; having trained a much longer routine, they can pick and choose their strongest skills to maximize scoring potential and consistency. That said, small execution errors like missed handstands are more consequential in a college routine, so there’s often some cleaning to be done—meaning elite execution scores are a great way to see who’s closest to collegiate form.

Gaskins has been inconsistent on bars in recent years, but her skill variety and handstand instincts mean it shouldn’t take much more than a routine reconstruction to make her a major asset for the Tide. Like most elites, she’s got an array of same bar releases to work with, as well as a great Pak and several Shaposhnikova variations. The trick to making this routine a regular 9.9+ might be a dismount downgrade: Her double layout often stays too close to the bar, making the landing inconsistent.

Quinn hasn’t competed in a few years, but in junior elite she had an interesting pirouette-heavy set that was more consistent than some of her release-driven contemporaries. Her routine includes lots of stalders, a great Pak and a true full-in dismount. It’ll be interesting to see what she’s retained almost four years on from her last competitive season. But if she’s in shape, she’ll fit in well with a lineup that isn’t afraid of pirouette work.

The question with Frazier isn’t if she’ll do bars at UCLA, it’s which routine she’ll show. With a selection of at least seven same bar releases to choose from, the only challenge will be picking skills that don’t cause breaks in foot and leg form—expect her stalders to go, and the Maloney might exit the routine in favor of the prettier van Leeuwen. Knowing Frazier, she might even start the season with multiple routine variants or even try to combine two same-bar releases.

Like Frazier, Thomas has a rich skill set with which to build a college routine, including some E release options, and her stickable double layout dismount will be a serious weapon in Florida’s bar lineup. Her Pak salto is the only serious vulnerability in her elite routine; don’t be surprised if she takes this skill out.

Flatley’s bars didn’t get the attention that her beam did as a junior elite, but she was a star regardless, with great handstands, a huge Jaeger and a hollow double layout. In recent training footage, we’ve seen a pared-down college routine that looks extremely viable and scored well in a handful of J.O. meets. (She didn’t compete level 10 enough to be eligible for our “most anticipated freshman” lists, so she’s featured here instead.)

And a bonus clip of one of her recent bar skills in training.