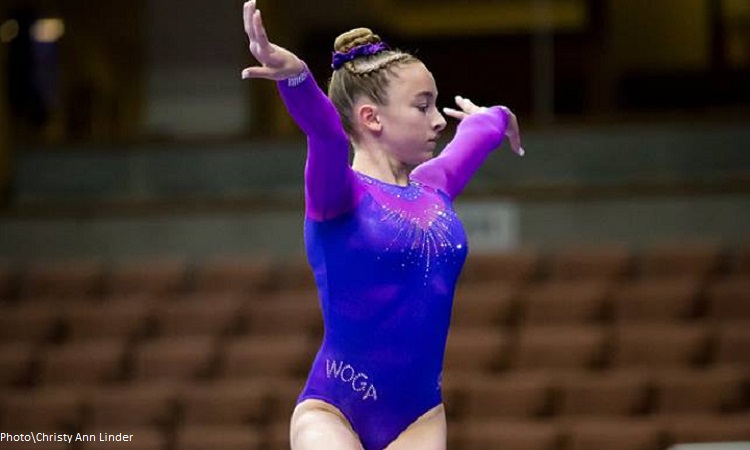 The American Classic took place this weekend in Salt Lake City, and unusually, fans got to watch it; the meet was hosted by the University of Utah and streamed free online. Three future Utes got to compete in Huntsman for the first time, and 18 other future collegiate gymnasts also took the stage to try to get their nationals qualifying scores. We’ve broken down the results by future college team.

Note that gymnasts who qualified to nationals based on this meet are bolded, but many others have already qualified at other meets.

Adams nearly stuck her Yurchenko full and showed off difficult and tidy tumbling to easily get her nationals qualifying score. She shares the beautiful flow and release amplitude typical of Buckeye gymnasts on bars, just landing her dismount a little low.

Hollingsworth had a challenging day, with two falls and some technical issues on bars, but hit a good Yurchenko full.

Williams shone on bars, putting up the best score of the meet there with some beautiful in-bar work and a near-stuck, hollow double layout dismount. She was clean on her other two events, and was the only gymnast to get a three-event qualifying score.

Mabanta had a fall on beam but was great on floor, showing passes that will adjust well to college, as well as some great dance.

Florida led the imaginary collegiate field with five commits representing four consecutive recruiting classes. McCusker had a strong day, qualifying to nationals on her two-event score. Jones shone, winning the all around—despite a fall on a jump on beam—with a stellar Yurchenko double and a double double on floor.  Blakely had a tough day with a fall on floor and an issue on beam but showed great style throughout. Gallentine impressed with one of the top junior bars routines, including a full-twisting double layout dismount, while Butler had tough routines on events that are usually strong for her (including two falls on beam) but was great on bars.

It was a tough day for the future Gymdogs, as HOPES competitor Emma Boyd had a nasty crash on bars and had to scratch, and Hahn had some amplitude issues and a fall on beam. Both are usually strong competitors who will hopefully be back and in form at the U.S. Classic.

It wasn’t Tatum’s day, but she already has her qualifying score from international competition earlier this year and shouldn’t be too worried. Finnegan started rough, bounding off the mat on her Yurchenko double and then crashing her dismount on bars, but bounced back with two strong routines to get her qualifying score.

For established elites like Shchennikova, this meet is a chance to play with new routines with zero stakes, so a dismount crash at the end of an incredibly ambitious bars set (6.2!) isn’t a big concern. Her feet looked tidier than last year in her bars work, and while she wobbled through her beam set, she resisted falling—a valuable skill for a soon-to-be collegiate gymnast.

Davis just missed her three-event and AA qualifying scores, but she did manage to hit the two-event score and will be heading to nationals on vault and bars—unless she gets higher scores at the U.S. Classic. She shone on bars and has great potential on beam, just with some iffy connections and soft legs on leaps.

Like Shchennikova, this meet was playtime for Jade Carey, who made her elite bars debut in great style with just one missed handstand and laughed through a fall on her beam dismount after a great routine. Carey has no reason not to be an all around star in college—she was beautiful on bars in Level 10, and just lacked the difficulty to immediately compete it in elite—but if she can reliably compete AA in elite too, it could make a big difference for team selections.

Like her former clubmate and future college teammate Lauren Bridgens, Johnston’s biggest collegiate selling point is a strong Yurchenko 1.5—this one was just a little tucked. She shone on bars too, with a great Jaeger and a beautiful release combination. She finished third in the all around and easily qualified to nationals.

Lee had a tough day, leading the standings after two with some beautiful work before peeling on a van Leeuwen on bars and having to scratch the rest of the meet. If she’s recovered by the end of the month, she’ll have to try again at the U.S. Classic to get her qualifying score.

All three future Utes just missed their qualifying scores, but McCallum, at least, has hers already from early in the season. She had a great bar routine that wasn’t streamed, but fell on an aerial on beam. Gilstrap impressed with beautiful technique but was just barely short of her three-event score. Soza was gorgeous on beam except for a slightly low double pike dismount and showed impressive difficulty on bars.

We’ll be back in a few weeks with coverage of the U.S. Classic. In the meantime, follow along with our most anticipated elite freshmen series to see what elite routines your favorite college team will be adding this year!