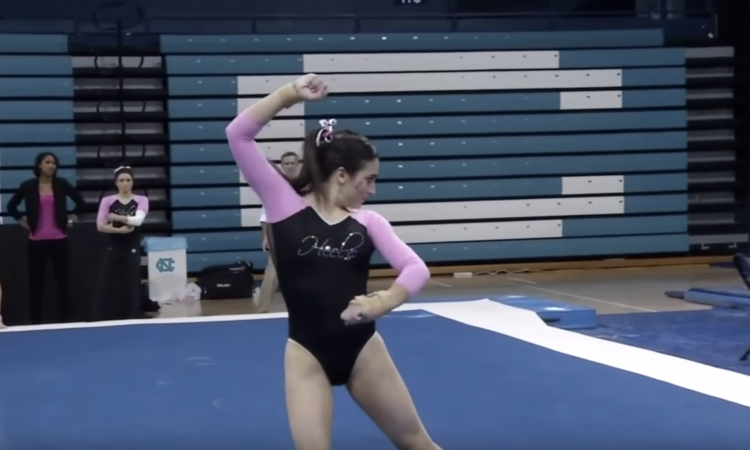 Lexi Cappalli is a 2016 graduate of the University of North Carolina. She excelled on floor, earning first-team All EAGL her sophomore year and a career high 9.925 against Georgia during her junior season. Cappalli was also an accomplished all around performer, earning second-team All EAGL recognitions her sophomore, junior and senior years. As a junior she was an individual qualifier to NCAA regionals, finishing 10th in the all around. Putting the “student” in student-athlete, Cappalli was named to the all-EAGL Scholar Team all four years as a Tar Heel and is now putting her academic (and analytic!) skills to use as a research executive.

College Gym News: You were a mathematics major at North Carolina and since graduating you’ve been working as a Research Executive. What is it about math and analytics that interests you, and what do you do with that in your current role?

Lexi Cappalli: Math is something I fell into after I figured out that Chemistry wasn’t for me. To me, it has always been a tool to find meaning. A number can tell you a lot by itself, but the context surrounding that number is super interesting and hugely important. A number’s true purpose is as a vehicle to understand something much bigger. It’s a little like literature in a way–there’s a story behind everything.

The search for the story is what has always interested me about math and analytics, and it’s how I tend to use them in my day job. I learned math in what felt like every which way you possible could—from the basic 1 + 1 to theory that continues to feel like it was pulled from a cloud in the sky. These things tend to be perceived as skills that can only apply to teaching or data/computer science professions, but they actually have very broad applications. Everything I’ve learned about logic, understanding trends, the meat behind a statistic—it comes from my time in the math world, and it all translates into what I do today, which is helping our clients make strategic decisions for their brands. Learning how to find that story for brands has been a thrill for the last two years!

CGN: What were some of your favorite memories competing for the Tar Heels?

LC: There are so many! I loved all the little things like our team huddles and the small, supportive things we used to do to lift each other up. For me specifically, it was my first and only 9.9+ on floor. I had been working towards making every little detail of that routine perfect all season. We were up against Georgia, which of course is a tough team to compete against. Floor was our last event. For as hard as I had worked for that score, the actual routine never felt easier than it did that day. Everything came together so naturally, and I really gave the performance everything I had. I knew after I hit the last pose that something big had just happened. My teammates were screaming; my parents were both there to see it, and they were both on their feet, which was such a cool moment. There’s a hilarious picture of me somewhere running off the floor screaming—just an overwhelming sense of elation as it all hit me. When the score came up, I remember my coach wrapping her arms around me and just screaming, “We did it! We did it!” I have so many amazing memories of competing, but that one definitely stands out.

CGN: What advice would you give current and future North Carolina gymnasts today?

LC: A few things, actually. Take advantage of the entire student-athlete experience because it goes beyond the sport itself. I am incredibly grateful for my time as a gymnast at Carolina, but it definitely did not define my whole experience there. I used athletics to get connected to faculty, athletic and academic administrators, the Chapel Hill community and more. To this day, the experiences I had through these connections are some of the most fruitful I have ever had.

Your college life will be different than that of most of your peers. There’s an expression you’ll hear often: “The jersey never comes off.” Even though we wear leotards, the sentiment still applies. Take that to heart because that day you first walk on campus, you are no longer just representing yourself. You’re representing your team; you’re representing your university. It’s a big deal and can feel like a burden sometimes, but don’t be intimidated by the magnitude of it. Being part of something far bigger than yourself puts a lot of things in perspective and will help you more than you realize once you graduate.

Branch out beyond the athletics bubble sometimes. Your college experience will be that much better if you find a few friends or join a club that has nothing to do with your sport.

CGN: Floor was a strength for you during your four years. Was it your favorite apparatus to compete?

LC: It was! Floor was the most fun for me because it was the place (and the event) that I could fully be myself. For that minute and a half, the floor was mine, the judges were mine and the crowd was mine. It existed in its own little vacuum for me–I had no problem truly giving it my all and performing. I fed off the crowd and reactions from the judges and my teammates. As weird as this is about to sound, I always felt like the crowd and I had our own relationship of sorts. It was an overwhelming sense of support and connection not unlike what you feel from your family or being in on a joke nobody else understands. It was a strength because I enjoyed it so much, and it was way more to me than just an event.

CGN: You competed as an individual at regionals. What’s the atmosphere like competing for yourself rather than your team?

LC: It was…different I guess. It’s a tough question for me to answer because throughout my time at UNC I had such a strong sense that representing Carolina was far bigger than me, so putting myself in an individual setting didn’t feel all that different from a team setting. I was still competing for my team. The actual competition atmosphere was different because most of my teammates were not physically with me, but I was lucky to rotate with a great group of girls (shout out to the University of Maryland!) who really embraced me that afternoon. I also got my own sign, so that was pretty cool.

CGN: What skill as a student athlete have you brought with you into the workplace?

LC: Many things, including discipline, time management, understanding the value of teamwork, self-awareness, adaptability—the list goes on. Certain things I used to do to calm myself during competitions have also helped me out in the workplace. It’s funny; I get a similar adrenaline spike walking into a presentation that I did before a floor routine. I can’t exactly start pacing the hallways like I used to pace the tape lines, but there are other (much more subtle) things that have been helpful and allowed me to project confidence even when my stomach might be in knots.