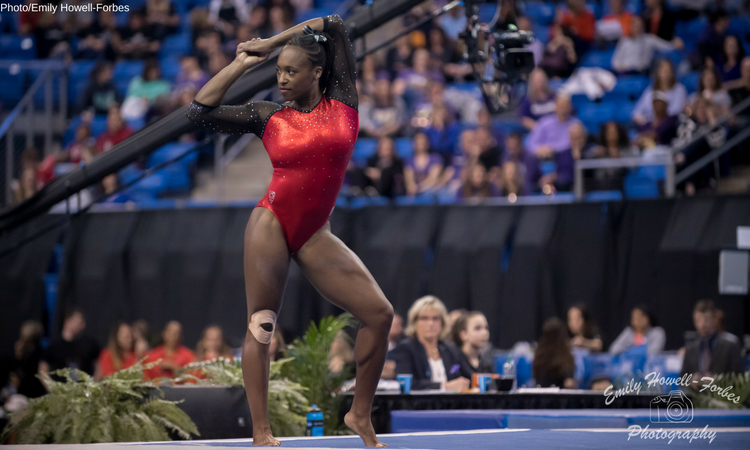 Throughout the weekend, there were many impressive performances, and contrary to expectation, there were no ties larger than three people for any event title. On vault, it proved necessary to have a 10.0 start value to win, as the winning vaults were two Yurchenko doubles and one Yurchenko 1.5. Mykayla Skinner and Brenna Dowell stuck their vaults, leaving a lasting impression on the judges, and Alex McMurtry’s superb form was enough to compensate for the small slide on her landing, all three scoring a 9.9375. This season, Dowell has had an uncanny ability to stick her vault. “I was just trying to do what I normally do,” Dowell said. “I usually talk to myself, like ‘let’s go B,’ and I felt it on the block that it was going to be a good one.” Sydney Snead, Maggie Nichols, Taylor Houchin, Mollie Korth and Alicia Boren were also impressive competitors on vault. Snead was the clear standout of the first session and Korth the surprise of the second, each sticking their Yurchenko 1.5s. Also, though individual titles are awarded after semifinals, it’s important to note Sienna Crouse’s vault from Super Six. Her Yurchenko 1.5 scored a 9.9625, which would have won the title had she performed it that way on Friday.

Like on vault, both bars champions were also from the second session, with Nichols and Elizabeth Price scoring perfect 10.0s for difficult routines. Both compete a Church—a piked toe-on Tkachev—and showcased excellent handstand work throughout their routines. Kyla Ross, Kennedi Edney, Alex McMurtry and Nicole Lehrmann were also strong contenders, and Peng-Peng Lee performed her trademark skills, with a routine featuring an enormous Ray and a Bhardwaj—a full-twisting pak salto.

The race for the beam title was over almost before it began, as halfway through session one, UCLA’s Lee put up a 9.9875 that was essentially impossible to catch. As team after team had problems on beam, it became apparent that it was unlikely anyone could duplicate the near-perfect feat she had achieved. Many expected contenders came up short, as nerves bested some typically solid competitors.

Maggie Nichols and Katelyn Ohashi tied for the floor title at 9.9625, both with routines featuring an E pass combined with unique combination tumbling and stellar showmanship. Each has previously scored multiple perfect 10.0s, so seeing them win was no surprise. Myia Hambrick, Alyssa Baumann, Anastasia Webb and Mykayla Skinner also performed incredible routines but came up just shy. Baumann was the only competitor who scored above 9.925 without an E pass in her routine despite having competed double layout a few times throughout the season. And of course, Skinner has been a floor star her entire career, featuring the most difficult single skill in the NCAA—her double-twisting double back, which is rated an H in the elite code.

The all around title was Nichols’ to lose, and she did not disappoint, as each of her routines scored 9.900 or higher, and she had nearly a full tenth lead over any other competitor. Skinner was her biggest competition, earning second with consistent scores: two 9.925s and two 9.9375s. And Price rounded out her stellar career spectacularly, fighting her way up to third without a team behind her. As it was her last competition, Price knew that this day had to count. “Throughout the day, I was just focusing on not getting ahead of myself and soaking in all the moments,” Price said. “keeping that in mind and trying to just enjoy all the people and all the events was kind of my main goal for the day. Looking back on how everything turned out, I’m pretty happy with myself.”

Looking incredibly focused in warmups, Price said she had to remind herself that she was at a meet, not to get too nervous or emotional and to just rely on her training and past experience to get where she needed to be. Her floor performance was the final routine of the day, and with all eyes on her, she put up a 9.925. However, fans thought it should have been higher; the entire arena roared with disappointment as two judges flashed 9.850s, with even gymnasts from the first semifinal leading the jeers. “To have all that love and support from the entire crowd and the fans from the other teams—even though I don’t know them, and they’re obviously here supporting other people—it’s just a huge honor to have been recognized in that way,” Price said.

Ross, McMurtry, and the LSU trio of Hambrick, Edney and Sarah Finnegan were all expected to contend for the podium and delivered. But the surprise of the day was again Korth, who put together one of her most balanced performances of the season to tie Finnegan for eighth overall. Supported by her dad, who went shirtless and painted himself Kentucky blue, Korth shined through on a day when her team otherwise seemed to fall short. She’s one to watch in years to come, though clearly she has some major competition—four of the nine who made the podium are sophomores, including the top two.