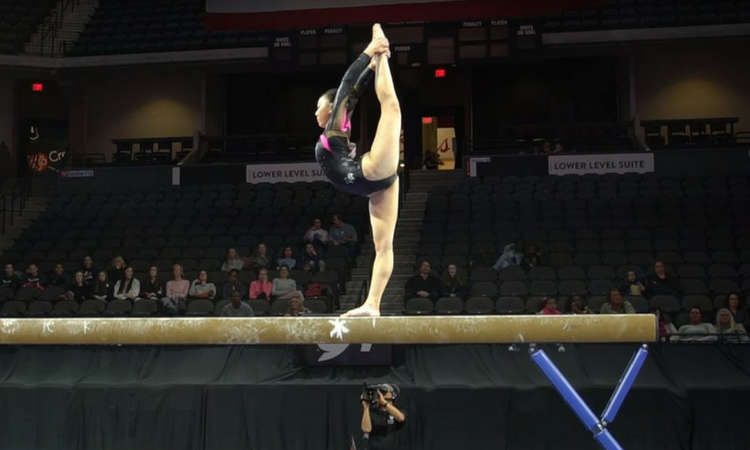 It’s state meet season in the Junior Olympic world, which for fans of collegiate gymnastics means a chance to see the most anticipated recruits go head to head for titles and regional placings. To help keep track of one of the busiest weeks of the J.O. season, we’ve gathered a list of every all around level 10 state champion from a meet with published results. Once you’re done reading the highlights, check out the full list at the bottom of the page!

Six gymnasts have registered all around totals of 39.000+ so far at their respective state meets. Andrea Li of California’s 2021 freshman class leads the pack with an outstanding 39.225, which is also the highest score of the level 10 season so far. Georgia signee Rachael Lukacs maintained her status as the top 2018 graduate in the country with a 39.050. Freshmen competing in their first collegiate season in 2020 Gabryel Wilson (Michigan), Jaedyn Rucker (Utah) and Chloe Widner (Arizona) also exceeded the 39.000 mark, as did Nastia Liukin Cup senior champion Haleigh Bryant (LSU, 2021).

Lukacs was far from the only high school senior to pick up a great finish at state. The second-highest score from this group was surprisingly Karley McClain, who topped the 17+ division in Utah and will be heading to Southern Utah in the fall. Both currently competing members of Michigan’s signing class, Natalie Wojcik and Abby Brenner, picked up state titles, as did Nya Reed and Savannah Schoenherr who are on their way to Florida.

Several gymnasts signed to lower-ranked teams made a splash over the weekend as well. Alisa Sheremeta scored a stellar 38.750 and seems poised to make a huge impact at UIC. Two members of SEMO’s incoming cohort picked up state titles; Anna Kaziska won the senior division in Kentucky, and Samantha Decker claimed the Senior C title in South Carolina. Washington senior champion Kristina Peterson recently verbally committed to Alaska, and she has the scores to be incredibly valuable for the Seawolves.

The University of Illinois-Chicago had two committed gymnasts pick up state titles, both with scores in the high 38s—Alisa Sheremeta of the 2019 cohort and Payton Murphy of the 2020 are set to make a great impact in Chicago. Lauren Joost of Chicago is heading to Penn in the fall, and Towson will get Emerson Hurst from Florida. UNC has three state champions, all of whom won state titles in North Carolina with scores over 38. Northern Illinois is picking up Nebraska champion Morgan Hooper, and Ball State has two state champions—Julia Wiest and Emma Itoh—joining in the fall. Arizona has a bright future, with a stunning five gymnasts—three graduating in 2019—picking up state titles.

For more details, check out the full list below.

*Please note that several states are still missing, as not all results have been released. Published meet results may also be incomplete.