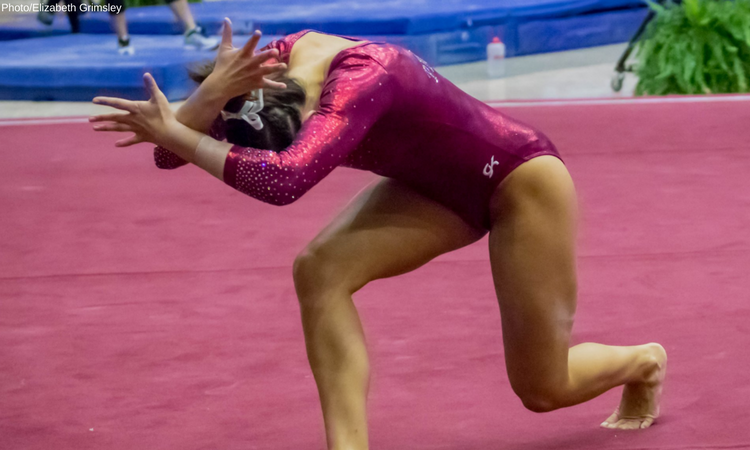 The Midwest Independent Conference is arguably the most diverse conference in collegiate gymnastics, with representatives of all three divisions matching up fairly evenly. This year, though, expect the title to come down to its two Division II teams; Texas Woman’s and host Lindenwood have led the conference since the beginning of the season and remained closely matched throughout. Of the rest of the field, UIC has the best chance of an upset, with a top score only a tenth below TWU’s.

The other three teams top out a little lower – ISU and SEMO in the 193s, and Centenary at a high 191, though I think they can do more on a good day. It’ll be interesting to see how the order shakes out here.Also keep an eye on the all around; Schyler Jones of TWU, Gabi Cooke of ISU, and Mikailla Northern of UIC are very closely matched.

WHOA. Bria Northrop making her season debut on floor. A risky move, but also an awesome one. Floor was a little bit of a disaster last weekend and bringing back a past star who’s been (presumably) injured might be what they need. The Pioneers really need a 49.2 or so on this piece; watch for 9.9s from the last two.

VERSEMANN – TWU: Big lunge out of double pike, nice switch side Popa series. Bound out of front lay front full, great choreo. Should be a 9.65ish to start, which is solid.

And my stream just crashed. We’re off to a great start.

Okay, back up for PETERSON – TWU: Good Rudi. Switch half wolf full is great, beautiful bit of ground choreo in the middle in a quiet moment of the music. Deep on front full with a step to the side.

UIC has vaulted a bunch of fairly identical FTYs, good in the air with probably a tenth pace back.

I think I saw Gabi Cooke (ISU) come off beam on a LOSO – legs quite a way from in line and didn’t really have a chance to land it.

NORTHROP – TWU: Stumble OOB on double pike. This rotation is just not quite what TWU needs it to be. Good double back (?), cross step on front combo pass.

MOREDOCK – TWU: Great double pike, hop to lunge on double back. She’s always just a next level of performance quality. 3/2 front layout is airy and lovely. Holds the sassy face in her ending pose for about a second and a half before breaking into a huge grin, awww.

The arena music is… dubstep Rolling in the Deep.

JONES – TWU: Double back great control, sliiiightly big lunge on a double pike but it’s probably nothing.. Her floor music is so quirky and she pulls it off. Wolf 1/1 tuck 3/2, 3/2 front lay and one foot skids a tiny bit but somehow manages to hang onto the stick.

That would easily be a 9.9 at home – uncertain what they’ll do with it in the first rotation on the road.

Not the start that TWU needed; it’ll be hoping for Lindenwood errors now to be able to hold pace.

Coach Jen is on the floor wearing many, many inch heels. To be honest she’s half of why I’m watching this.

PARKIN – TWU: FTY, a bit deep with chest down.

COLEE – TWU: FTY, bounces up on her toes but stays mostly in place.

Someone from Centenary just threw a Ray! Awesome routine, just a little bounce on a FTY.

FRANKLIN – LU: Beautiful lines, I love her dance. Switch 1/2 wolf 1/1, tour jete 1/1 later on, yes get all your difficulty from dance. Hop to lunge from double pike, stellar routine.

LAZARUS – TWU: One of the better fulls yet, little hop back but good in the air.

JONES – TWU: Y arabian, STUCK. Goes to fidget one of her feet and then remembers not to, hahaha.

LEMAN – LU: Crashes front 2/1, there’ll be a tenth OOB there too. Her dance is just so beautiful.

Well, clearly I typed that without looking what I was typing at ALL. But it’s funny so I’m keeping it.

MCMULLAN – LU: I feel like I should know the song that this opens with. Double pike, secure, jump to lunge. Tour jete 1/2 Popa is great,  has to pull to get her double back around but chest position is fine in the end. Nice secure 3/2 front lay. Definitely the best one of the rotation there. 9.775 is a bit low, but it’s early.

HENRY – LU: 3/2 front lay. Leap series RIGHT in the corner, scaring me a bit but it’s all good. Chest a bit low on double back.

SEMO: I saw a back walkover-swingdown, a fairly solid leap series, and a side aerial back full dismount stuck.

ALEXANDER – LU: OOOH leg over her shoulder choreo to open, that’s creepy and awesome. Obsessed. Double pike, but of a bounce back. 3/2 front lay is beautiful, this routine is so creepy-sophisticated-perfect. Pulls front foot up on step back of double back but just stays in bounds.

Floor scoring is wacky today. Neither LU nor TWU got their highest score for what I thought was their best routine. LU had an imperfect day on floor, but for the first rotation with several strong pieces to go they’ll take it.

SNYDER? – UIC: Great handstands, full turn to Gienger to overshoot. A bit of split legs on the release catch but nothing unusual. Full turn to double back with leg sep but stuck beautifully.

DAVIS – LU: Front handspring front pike with a hop to the side.

FRANKLIN – LU: Front pike 1/2 with a hop back! That vault has been such a journey this year, she learned it in offseason and then downgraded it midseason due to inconsistency but now it’s killer.

ALICKE – UIC: Beautiful bail to toe shoot, full turn to back 2/1 dismount STUCK. That was stellar.

BOOGERD – LU: FTY with a big hop back.

NORTHERN? – UIC: Stuck double layout in the anchor. These bars dismounts have been stone cold.

So, UIC. That bars rotation was absolutely stellar and I think significantly underscored. I would have had at least three of those at 9.9. I don’t know exactly where that came from but I’m OBSESSED. So so beautiful. We’ll see how beam treats them.

The margin I thought LU would have over an imperfect TWU didn’t quite appear, so it’s still vulnerable from there. But then, vault is LU’s weakest piece and vault and floor are TWU’s strongest. LU closing on beam is also very scary.

LAZARUS – TWU: Bail to toe shoot is good, wacky direction on Tkachev and falls. Takes a while to rechalk and chat with coaches, double layout turns piked in the middle but landed solidly.

ALICKE – UIC: Good flic loso! A bit short on switch 1/2 but like, who isn’t, to beat jump. Double turn!! Side aerial to split, not really sure why she’s doing this much difficulty.

JONES? – TWU: Full turn to Gienger is great, short on bail, full turn to double back close to the bar but college stuck.

KELLY – TWU: Blind change to Jaeger is great, double layout stuck! Her lines are so beautiful on bars.

The arena music is really so amazing. We had Barbie Girl in touch and now it’s Carry On My Wayward Son. We Like to Party has also made an appearance.

UIC had a fall on an acro series – I think Riley Mahoney. SEMO had a Seven Nation Army floor.

BADDELEY – UIC: Was that a Y turn? Flic loso is great, switch to sheep with a little check. Great control on side aerial.

JONES – SEMO: Switch ring to cat leap 3/2 to one knee series, I’m obsessed? Big-ish lunge out of Rudi to close.

NORTHERN – UIC: Leg up check on flic loso, but not terrible. Cat leap to side aerial and a fall – they’ll have to count one now. Stares at the beam with her hands on her hips for a little while which, same girl. Stick on 3/2 dismount.

BRAWNER – SEMO: Performance quality through the roof here, I basically didn’t catch any tumbling but I’m working on the assumption that it was good. 9.875 so I guess so.

UIC amazingly still holding the lead over TWU even with a counted fall on beam. Such an impressive day.

ALEXANDER – LU: Pike Jaeger to overshoot, double layout with a bit of leg sep but stuck.

COLWELL – LU: Nice straddle back, everything is freezing and dying so I don’t know what else she did.

HENRY – LU: Just short on a cast, great bail. I think there was a release at the top there. Full in dismount is deep with a step forward – it was crazy high and she overrotated it.

SOKOLOWSKI – LU: Great Jaeger, clear hip to Pak is beautiful. full turn to double back with a hop back. That’s 9.9 material, absolutely gorgeous. 9.7…? Okay, sure.

JORDAN – CC: Big lunge on double pike. Really controlled on the rest, straddle splits out of this world.

JONES – TWU: Switch to tuck 1/1 to beat jump, great. Kickover front, knees go out to the side but it’s fine. 3/2 twist and holds the stick!

LU only needs a low 48 to stay ahead of TWU, so practically it’s about holding off UIC on floor, which is also very doable. I think SEMO’s score is a season high? Will check later.

ALBRECHT – UIC: Great switch side Popa, I feel like I should know this song? Front something front lay, beautiful double back.

FRANKLIN – LU: Flic loso, super steady. Sissone to side aerial is a bit slow but I think fine, beat jump to split 3/4, she should teach elites how to do that. Gainer pike stuck.

COLWELL – LU: Flic flic loso, beautiful, lovely control on full turn, some other stuff, dismount off the side and Coach Jen is VERY EXCITED.

ALICKE – UIC: I don’t know what happened in the first pass. Lovely splits in opening leap series, 3/2 punch front well controlled. Awesome double back. She’s become such a valuable gymnast this year – It took a minute to adjust to college and develop some consistency but now it’s there she’s pretty much the best.

BADDELEY – UIC: Front thru… couldn’t tell if that was a 3/2 or 5/2 but it was pretty and also fairly close to the line. Her floor music is pretty much the best, closing double back

Closing with Northern on floor and Sokolowski on beam, thank you universe.

NORTHERN – UIC: Front thru double back is basically stuck,  really nice leap series, music turns into hands clap in the middle because I don’t know, closing double back great.

Lindenwood wins its fourth consecutive MIC title in the school’s first ever hosted conference championship! They’ll want to fix the wobbling-on-beam thing, because that’s not supposed to happen, and tidy floor and bars landings. But to score a low 195 for an okay-not-perfect day is great for a team that started the season in the 191s and puts them in a very comfortable position heading into USAG nationals.

Just spotted my favorite person Coach Jen carrying her shoes in one hand and wiping her eyes with the other, which, same girl.

TWU did well to hold steady and put in a strong number, particularly on beam where 9.9s aren’t common for the Pioneers. UIC was in a very strong position at the midpoint and unfortunately had to count falls on beam and floor; it’s not news that the Flames are a technically superior team held back by their consistency problems, but there are indications that it might be on the upswing. SEMO did turn in a season high by a margin of two tenths! ISU and Centenary have had better days, but got great results from their individuals.