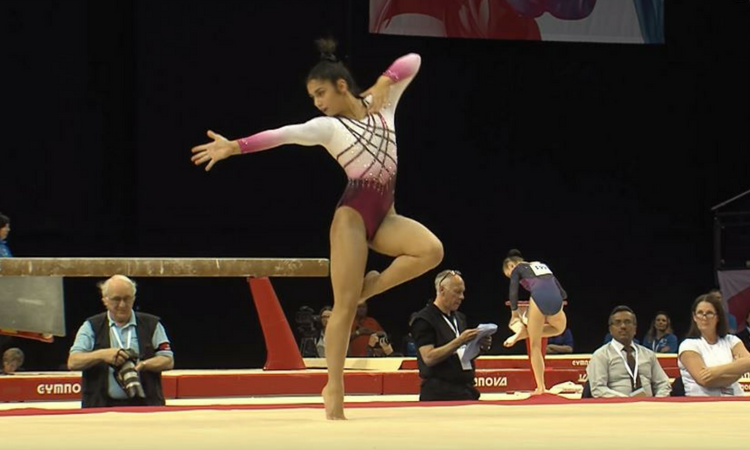 The elite season is starting to ramp up, with several major meets per weekend in the month of March. We’re recapping the performances of NCAA gymnasts future and past at these competitions.

Four future NCAA gymnasts and one alumna competed in the British Championships in Liverpool this weekend. Phoebe Turner, so far the only signee of Iowa State’s expected monstrous incoming freshman class, finished 11th in the all around and scored a strong 13.400 on her Yurchenko full—though don’t forget that she’s capable of a double. California signee Abigail Solari made the vault final, showing the same 4.4 start as at the English, which is most likely a front handspring front tuck half. She’s capable of doing that vault piked and that will be the target for her first NCAA season. It’s a 10.0 start, but after a long period of injury, it’s an important victory for her to compete all four events, and especially to have a clean day. Watch for more videos of these two to emerge over the next few days; there are still a lot of questions about the composition of their college routines.

California commit Amelie Morgan nearly swept the junior British, picking up one bronze medal on beam to complement her four gold medals. She went clean in the all around to win the title by a margin of nearly two points, impressing especially on floor where she stuck both her 2.5 twist to front layout and her front double twist to stag jump en route to the only floor score over 13.000 on the first day. Her all around score would have ranked third in the senior final. In the vault final, she registered an astounding 9.500 E score on her Yurchenko full. On bars, she had the highest difficulty or execution score, and on floor she narrowly edged clubmate and future collegiate rival Jakubczyk for the title.

Also note that Morgan has been working a very viable Yurchenko double, though it wasn’t quite ready for this meet.

Future Oregon State Beaver Jakubczyk shone with one of the most stylish floor routines of the weekend; she picked up a silver in the event final and could probably slot into the three spot of the OSU floor lineup this weekend with no composition changes for about a 9.850. She picked up another silver on bars and finished a narrow fourth place in the all around. Jakubczyk’s stock has risen incredibly fast since last summer, and we’ll see her in competition plenty more times this season.

UCLA alumna Danusia Francis made her return to competition at the British as a guest competitor since she’s now representing Jamaica. She scored a 49.000 and would have ranked 19th, even despite two falls; on a hit day, she’d likely be scoring 52+, an impressive feat for a gymnast who has competed a full elite set only a handful of times in the last six years. As well as landing a great Yurchenko full for a 13.650, she ranked fourth on floor and qualified to the event final there, where she over rotated her double pike to produce a save video or the ages. It’s great to have Francis back on the competition floor, especially wearing a UCLA lookalike leotard by Rebecca’s Mom for the perfect nostalgic touch.

Never let them see you sweat (or fall)!

The SEC was heavily represented in Montreal this weekend, with two future representatives of Alabama and Georgia and one of Florida in attendance. Alabama signee Shallon Olsen led the way, with fourth place in the all around and a vault title; if she keeps hitting her Yurchenko double for 9.300+ execution scores, it could be worth retaining for college. Future teammate Luisa Blanco had an inconsistent meet, but showed off her trademark technique throughout. If Blanco stays healthy and doesn’t push difficulty too hard, she could have a Kiana Winston-like presence on the team.

Both Georgia commits at the meet are Canadians. Signee Megan Roberts finished a convincing eighth place, and Haley de Jong ranked just below in 10th. De Jong also made the bar final, though she had a challenging routine there that kept her down the rankings. Florida’s Gabrielle Gallentine qualified third to the bar final with an impressive 13.767, though she too fell. It’s not uncommon for Gymnix to be a high-incident meet since it’s so early in the season, so these errors don’t reflect too poorly on the gymnasts’ overall consistency.

A few other schools were represented, too. Penn State recruit Madeleine Johnston finished just below Olsen in sixth with three scores over 13.000 and made three event finals; she’s an incredibly promising prospect for the Nittany Lions. New Michigan commit Deiah Moody of WOGA was one of only a handful of gymnasts to hit in the bar final, narrowly missing out on a bronze medal. Her WOGA teammate and future Oklahoma Sooner Audrey Davis didn’t have her best day in the all around, but still made it over the 50.0 mark.