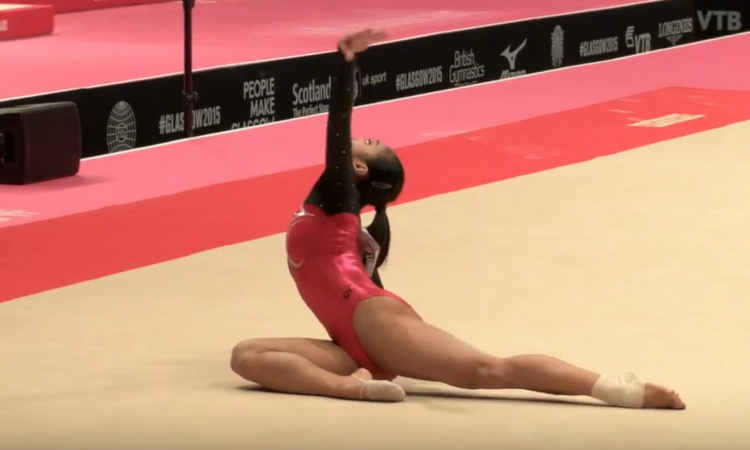 Gonzalez was born in the Philippines and lived there until 2015. During that time, she competed as an elite, helping her team win the bronze medal at the 2015 Southeast Asian Games. At the SEA Games she placed 16th during the all around qualifications, leaving her out of the finals. During team finals, she impressed on floor with simple yet beautiful tumbling. With a little work and possible upgrades it wouldn’t be surprising to see her in the UCLA floor lineup.

Manitkul-Davis competed internationally twice in her last summer before college, helping Thailand to a ninth place team finish at the Asian Championships, as well as sixth place at the SEA Games. She was also a standout in J.O., scoring as high as 37.5. At Kent State’s intrasquad, she was the only gymnast to compete in the all around, and with a 9.875, it seems that floor could become her signature event. We’ve also seen a beautiful yurchenko half in training.

There’s been some uncertainty about when Watterson would start competing in college, but, according to Casey Magnesium who was at the Bears’ inntrasquad, it seems she’s on her way to Berkeley. The Gold Coast native has competed a full elite career including Elite Massilia, Olympic Hopes and the City of Jesolo Trophy, as well as numerous domestic meets. In the long term, she has all around potential but is most likely to immediately factor into the bars lineup in 2018.

Goyco competed as a member of the Dominican Republic national team at 2014 Central American & Caribbean Games, finishing 20th in the all around. We have not been able to track down any further results from her time as an elite. After her 2014 elite competition, she spent the following three seasons competing as a level 10 gymnast. Her time at that level was successful as she qualified to regionals in every season leading up to her arrival at Ball State. Claudia competed beam during Ball State’s Red vs. White intrasquad, so look for her to potentially be in that lineup come January.

Verdeflor was a star level 10, qualifying at age 12 and attracting attention with her technique and classic WOGA style. She began competing internationally in 2014, representing the Philippines in the first Youth Olympic Games, and alongside fellow collegiate gymnasts Sofia Gonzalez and Lizzy Leduc, helped the team to a bronze medal at the SEA Games in 2015. She concluded her elite career at the 2015 World Championships and hasn’t competed since due to various injuries. However, she’s finally healthy and has looked strong on bars and beam in training for the Nittany Lions.

King has represented Slovenia internationally since 2013, when she competed in her first Maccabiah Games. In her five-year international elite career, she competed at multiple world cup events, as well as a second Maccabiah Games in 2017 where she placed sixth in the all around. Her final competition before heading off to Springfield College was the 2017 Summer Universiade where she finished 33rd amongst a field of tough competitors. King will bring an unprecedented level of experience to the world of DIII gymnastics. As a team that has been consistently on the rise, keep your eye on the Pride and King in the years to come. It is also worth noting that King will become only the second gymnast from Slovenia ever to compete in NCAA gymnastics. The only other Slovenian known to compete in NCAA gymnastics was Sasa Golob who spent the 2011 season at Towson.