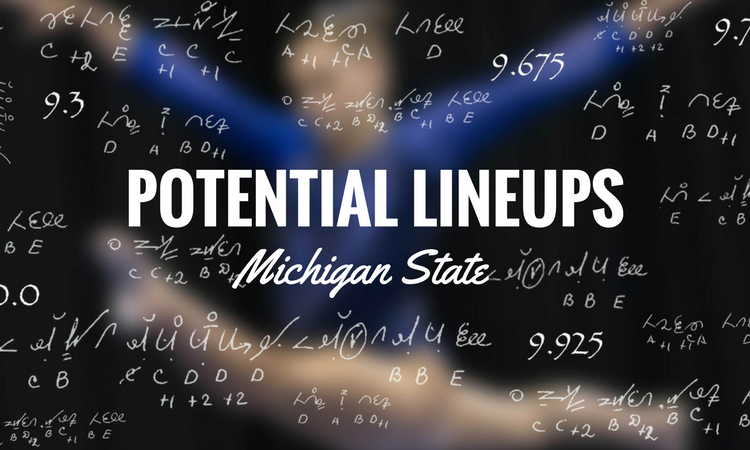 After a tumultuous 2017, Michigan State will seek to right the ship this year with a balanced class of freshmen and a handful of veterans returning from injury. While the Spartans missed out on regionals last season, taking a sharp drop from No. 28 to No. 40, they previously reached as high as No. 17, though not in quite some time. Can MSU reverse its downward trajectory and move toward a regionals qualification in 2018?

Vault was not pretty last season for the Spartans, finishing the season ranked No. 54, the lowest of any Big Four conference team. But with some help from the incoming class, the team may be able to change that. Anne Maxim is in a position to bring the first 10.0 start value to Michigan State since the devaluation with her Tsukahara layout full. In addition, Lea Mitchell and Michelina Lupinetti both have high, dynamic Yurchenko fulls that should score far better than the majority of the returning gymnasts. Ashley Beatty has apparently learned a stellar Yurchenko full competing a layout throughout her club career, so it’s clear these freshmen are going to make a big difference in the competitiveness of the team. But they can’t make regionals happen by themselves.

Michigan State actually graduated its two strongest vaulters in 2017 in fifth-year senior Nicola Deans and star all arounder Elena Lagoski, the only two to cross the 9.8 mark last season. Of the veterans, Drew Hendershot is the strongest, but due to her injury last year, she only competed five times, reaching a season high of 9.75. However, if healthy, her contributions on this event are vital to the lineup. Anna Gamelo also had decent scores last season, including a 9.775, the highest of any returning vaulter. She was also consistent, remaining in the 9.7s and only having one real miss. She’ll make a great choice for lead-off if she can continue that trend. Other frequent lineup contributors include Roya Shirley, who tucks her Yurchenko full, as well as Gabriella Douglas and Alexandra Hoyer. Shirley stepped in when Hendershot got injured, but her form can be loose at times. Douglas only competes a layout and Hoyer has been seen in a boot this preseason, so we decided to leave them as alternates for now. Find the rest of our proposed vault lineup below.

Bars was significantly better than vault for the Spartans last year, coming in at No. 42. But it’s still nowhere near what the team needs to make regionals. Unfortunately, one of the best bar workers would have come from Lindsey Lemke, who medically retired earlier this fall. In her absence, we expect the freshmen to step up, with Maxim being the standout. Her floaty Tkachev and excellent handstands are sure to impress, especially since that’s the area where the team was lacking in 2017. Tristan Brown is another great option, with a patient swing and clean dismount. She doesn’t get a lot of height in her releases, but the foundations for a dependable routine are there. Mitchell is another likely choice, especially since we expect her to end up in the all around. Her leg form on her transitions can get a little wild, but her aggressive swing and stickable dismount should help her steal a spot in the top six. Lupinetti has some wild leg form at times and she can overswing her toe shoot on occasion, which forces her into almost a dead hang. Until she fixes those issues, she may end up as an alternate. Madison McHale is also a possibility, though her handstands tend to be shorter than some of her classmates.

Of the veterans, the only real certainty is Hailee Westney. Often the anchor of the Spartan, Westney regularly scored in the 9.8s and even broke 9.9, something no other veteran can say. Her attention to detail in handstands and toe point really sets her apart from the rest of the pack, so she’ll almost certainly retain her anchor spot. Shirley is another possibility here, and though her scores aren’t the highest, she never fell either, making her a good option for the lead position. One gymnast we’re hoping to see back in the lineup is Jessica Ling, who we believe was out with an injury last season. She regularly hit in the 9.8s with a high of 9.875 in 2016, which would provide a real boost to the lineup in 2018. Gamelo is another a decent option, though her career high is only a 9.75, and she more often got stuck in the 9.6s. Below you’ll find our proposed bars lineup for MSU this year.

Beam was even better than bars for the Spartans, finishing the season at No. 38. It works out nicely that the event is a strength since it’s probably the weakest apparatus as a whole for the freshmen. Mitchell is the strongest of the group, with steady, confident work and the scores to match. The composition isn’t flashy or unique, but it is consistent and that’s where she can fill a big hole for the team. Lupinetti is gorgeous on beam, though she’s incredibly inconsistent. An early lineup slot, maybe following a stable routine from Mitchell, would be best suited for her. Beatty has also been seen in training footage on beam, so it’s likely she’ll at least be an alternate.

Westney is one of the top returning gymnasts on beam, with precise dance elements not often seen in NCAA and excellent extension throughout her tumbling. She regularly scores above 9.8 and was one of only two Spartans to reach 9.9. The other was Douglas who also showcases her unique skills, such as a side aerial to layout-stepout series. Victoria Huehn, a beam specialist, broke 9.8 on a few occasions, while Hoyer is the last to have hit 9.8 in 2017. However, the boot is a worry for her prospects, at least to start the season. Molly Hoerner O’Malley hit 9.85 once, but her only other two competitive performances were a 9.4 and a 9.7, so she may be best left as an alternate. Shirley made the top six a handful of times for scores mostly in the 9.7 range. WIth all that in mind, here’s how we’d construct the beam lineup for Michigan State to have its best results in 2018.

At No. 34, floor was Michigan State’s best event in 2017. The freshmen will likely have even more to contribute, with engaging performance ability and strong tumbling from pretty much every member of the class. Mitchell is the only one with an E pass, a full-in, but her dance is a little forgettable. However, MSU, which produced three of the Big 10 co-champions in 2017, should be able to change that pretty quickly. Maxim has the club scores to merit her consideration as well, while McHale has a lot of pop in her tumbling, though she may need a new dance combination to minimize split deductions. Brown, though a bit of a one-note performer, has excellent execution and a huge double pike to kick off her routine. She’s not going to bring the house down, but she can definitely bring in solid, capable scores—the No. 1 thing MSU needs right now. Lupinetti could also bring big scores as one of the more dynamic performers in her class, but her inconsistency may keep her out of the lineup for now.

Recent updates have shown us that Hoyer, one of the stronger floor choices for the veterans, has been training a double arabian, which would boost MSU’s E pass total, an important measurement when looking at parity with the rest of the conference. Whether her boot is a protective measure or a serious injury is unknown, but she was absent from the team’s recent intrasquad, so we decided to put her in an alternate slot for now. Douglas has also scored decently, with a few 9.8+ scores and a ton of sass and attention to detail in her musicality. Hoerner O’Malley is our pick for the lead slot for 2018, thanks to her consistency while Hendershot is in an alternate position until we see her on the event post-injury. Here’s the full lineup we’d propose for the Spartans on floor.

Both regular all arounders from last year have not graduated, which leaves a bit of a hole. And Mitchell seems to be the most likely person to fill it, with a balanced set of gymnastics and the most consistent recent scores of any gymnast on the team.

Two gymnasts we’re interested to keep an eye on in the leadup to season are Brittni Chappell and Tessa Jaranowski. While Chappell only competed three vaults last year and Jaranowski didn’t compete at all, both were scheduled to compete at least three events apiece at Michigan State’s most recent intrasquad. While we have very little idea what their gymnastics might look like, that’s a good indication that they may be ready to contribute. Without video or any more information, we couldn’t justify putting them in our lineups, but we wouldn’t be surprised to see them in competition more often this year.

Overall,the Spartans seems to be in a much better position this season, and with much of the drama of last season behind them, they may be able to make regionals once again.